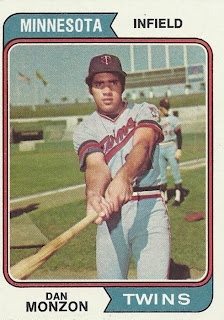 This card took me a while to find and the reason for that will be made clear down the road a bit. It is Dan Monzon’s second and final Topps card and it memorializes his final MLB season as well. Dan looks a bit more comfortable in Oakland than he did on his ’73 card at Yankee Stadium. But Danny was from the Bronx so maybe he felt a little pressure. It looks like it’s picture day for a few teammates because Jerry Terrell behind Danny looks like he’s posing also. Like Jerry, Danny could play pretty much anywhere but unfortunately for him most of the time he was in Minnesota – he spent all of ’72 and ’73 with the Twins – he concentrated on second base. It was pretty tough back then to get in any playing time if one was Rod Carew’s back-up so Danny had a grand total of 131 at bats those two seasons. All AL up until the time of this card he would soon be going to that other league where he had a much longer run.

Dan Monzon grew up in NYC where he played at least football and baseball at James Monroe High School. The same school was attended a few years earlier by Ed Kranepool. Dan graduated in ’64 and then attended Buena Vista College in Iowa where he continued to play ball. While there Danny hit .376 with a .498 OBA and was drafted twice: by Houston in a late round in ’66; and by Minnesota in the second round in ’67. One of his teammates at the school was Larry Biitner and Danny said good-bye to Larry and the rest of his team after his junior year to turn pro. He had a nice start in A ball that summer, playing third base while leading his league in pretty much all offensive categories. But he then hit a wall at the plate that lasted the next two years at that level. By then he was playing as much outfield and second base as third but in ‘70 he moved up to Double A where he had a nice offensive bounce and improved his defense markedly back at third. In ’71 he got back in the outfield a bunch after he moved up to Triple A because Eric Soderholm was the guy at third. While Danny’s field time declined he put up his best average and got a ticket to Minnesota.

While Monzon was up his two seasons he split time both years between second and third, but not too much of it. He opened the ’74 season back in Triple A and after a few weeks went to Montreal where he continued to play at the same level, hitting .239 for the season. He spent all the next season at the same spot and then the next two years in the Houston chain where he finished as a player in ’77. His stats on the card back, then, are his final MLB ones and he hit .253 with a .375 OBA in the minors. 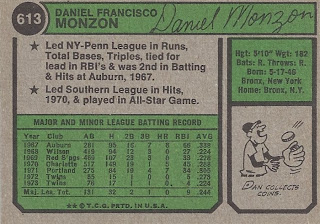 Danny’s first pro season was something else. He also put up an OBA of .474 that year. His son, Dan, was drafted in ’85 by the Mets and then played a few years in the White Sox organization in the late Eighties to early Nineties.

Alluded to above, I had to do some work finding Danny's card. The reason why is his card number. Since I always kept my cards by team and not by number, I would use the set checklist to sort the cards numerically. But on the checklist that should have included Danny's card, there was no card 613. In its place was card 618 and in the place of card 618 was card 681, which was fun since this set only had 660 regular cards. So on top of the career winding down, Danny also got dissed by the card guys.

On to the Watergate stuff:

1/31/73 – G Gordon Liddy and James McCord are found guilty of all counts against them including conspiracy, burglary, and bugging for their acts at the Watergate Hotel. The trial lasted 16 days and was presided over by an aggressive judge John Sirica who constantly demanded information regarding other conspirators from the defendants. Liddy and McCord were the final two known conspirators to be tried. E Howard Hunt and the four other actual burglars pled guilty to all charges earlier in the trial, purportedly to keep damaging evidence from being introduced. Both Liddy and McCord had been consultants to CREEP, Liddy on the finance side, and McCord as director of security. Both had also worked for the FBI and Liddy had been a federal prosecutor and White House aide while McCord was also in the CIA. All seven conspirators faced pretty stiff sentences: up to 45 years in jail and fines of $60,000 per person. During the trial other names popped up: Alfred C Baldwin was a former FBI agent who testified that he was the one who listened to conversations at the Watergate through earlier successfully planted bugs; Dwight Chapin, Nixon’s appointments secretary, had hired attorney Donald Segretti to disrupt Democratic campaigns throughout the country; Herbert Kalmbach, Nixon’s personal attorney, paid Segretti $35,000 for those services; and Jeb Stuart Magruder, deputy campaign director for Nixon, was the person who paid Liddy about $332,000 to run the operation. The Magruder connection was made via testimony by Hugh Sloan, the CREEP treasurer. Chapin would resign during the final phase of the trial.

2/28/73 – When J Edgar Hoover died in ’72 L Patrick Gray – people used to love initials back then – became the acting head of the FBI. In February he went before the Senate Judiciary Committee, chaired by Sam Ervin, as a nominee to become the permanent director of the FBI. On this date Ervin questioned Gray about leaks of FBI investigative data regarding Watergate back to the White House. Gray replied that White House councel John Dean had ordered the documentation of behalf of the President and that he – Gray – had complied. Following that sharing of information and many subsequent conversations with Dean, Gray testified that he was ordered by Attorney General Richard Kleindienst to not discuss Watergate elsewhere. Again Gray complied. He did not get the nomination.

A trade from the prior season helps in this hook-up:

1. Monzon and Rich Reese ’72 Twins;
2. Reese and Willie Horton ’73 Tigers;
3. Horton and Luke Walker ’74 Tigers.
Rick Reese could have had a card in this set - he hit below ,200 in his final MLB season split between Minnesota and Detroit. Since the mid-Sixties he split time at first base, primarily with Harmon Killebrew, and topped out in '69 when he hit .322 with some good power. He hit three pinch grand slams in his career.
Posted by wobs at 11:59 PM