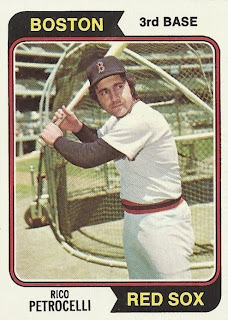 Rico Petrocelli had some pretty good cards over his career, both front and back. In ’75 he had a fat smile on his action card and in ’76 he looked like he was going to spit a huge wad of tobacco juice. In ’67 and ’69 he had the same photo for his two All-Star seasons. This card, though, isn’t one of his best but it does a good job reflecting Rico’s ’73 season. He would play hurt all season, nursing a pretty constant elbow injury that would take him out of the line-up by mid-August and require an operation after the year ended. And he wasn’t crazy happy being with the Sox as he joined Reggie Smith later that month in asking to be traded. Reggie would eventually get his wish but Rico stayed put and a few years down the road would finish his career in Boston which is pretty wiggy considering he grew up a Yankees fan.

Rico Petrocelli grew up in a large family in Brooklyn where in high school he was accomplished in basketball and baseball. In the latter sport he was a pitcher/infielder but the former role ended during some NYC playoffs his senior year of ’61. That was when his elbow snapped and a bunch of scouts lost interest which contributed to a delay in his signing. When that did happen, it was by the same Boston scout who signed Yaz from Long Island a couple years earlier. So Rico didn’t get started professionally until ’62 when he hit .277 with 17 homers and 80 RBI’s in B ball and also led his league in errors at shortstop. The next year he put up a .239/19/78 line in Double A and though his average dropped so did his E totals as Rico was a fast learner. He also made his topside debut that September, doubling off the Green Monster in his first at bat. In ’64 it was back to the minors and that year in Triple A he recorded a .231/10/48 line that got him so frustrated he decided to become a switch-hitter and was noted as one on his ’65 rookie card. But his defense continued to improve and that next year he would be called up for good.

Eddie Bressoud had been the Boston shortstop for a few years by 1965. Eddie could hit – in ’64 his average was .293 with 15 homers – but his range was declining and the Sox were afraid his average would soon follow. So Petrocelli won the starting shortstop gig in camp that year, as a switch-hitting rookie. But some early-season Mendoza-level offensive numbers ended the two-sided experiment and over the course of the year Rico added some points to his average. His final line and some uneven fielding numbers – both in part courtesy of his still ailing elbow – weren’t over the top but were good enough to get a spot on that year’s Topps Rookie team. In ’66 he continued to be bedeviled by the elbow and even had some DL time in August, but he became the starter outright, nearly doubled his RBI totals, and improved defensively. Prior to the ’67 season two good things happened for Rico – he had an operation on his problem elbow; and his former manager Eddie Popowski got promoted to be his infield coach, among other roles. Topps embraced the news giving Rico an exclamation point on his card back in that set and it all seemed to gel pretty well as he was an important cog for the pennant winner, improved markedly on defense, upped his average over 20 points, and was named an All-Star. He also won that year’s Game 6 of the Series with two big homers. Rico began accumulating bone chips in his elbow post-operation and in ’68 he missed a bunch of time and saw his offense come down hard. But in ’69 he cut down on his calcium and went on an offensive tear, winning another All-Star nod, and setting an AL record for homers by a shortstop. Defensively he was popping as well as he set another AL record for consecutive error-less games at shortstop with 44 and put up his league’s best fielding percentage for the second straight season.

In ’69 the third base situation in Boston was pretty messy in the wake of Joe Foy’s departure. It was pretty much the same in ’70 but was a bit better in Petrocelli’s few games at the position. He also continued his offensive burst with his lifetime high in RBI’s. Those games at third would be a good prelude to the rest of his time in Boston as that winter the Sox picked up Little Looie Aparicio from Chicago to play shortstop and third became Rico’s permanent home. Over the next couple seasons his average fell a few points but he kept his RBI totals pretty high and continued his excellent defensive work. After his problematic ’73 he got his second elbow operation and returned to offensive form the next year, with a .267/15/76 line. But a beaning by Jim Slaton in September ended Rico’s season and caused him balance problems the rest of his career. In ’75 his power took a dip - .239/7/59 - but he bounced in the Series to put up good numbers against Cincinnati. In ’76 his offense continued its decline in a year he split third with rookie Butch Hobson. Rico was released at the end of spring training of ’77 and ended his career with a .251 average with 210 homers and 773 RBI’s. In the post-season he hit .241 with three homers and nine RBI’s in 17 games. Defensively he is in the top 100 shortstops in career fielding percentage.

After Petrocelli finished playing he remained in the Boston area and remained close to baseball by writing a newspaper column and through radio broadcasting, both as a color guy and a talk radio savant, which he did through the ’80 season. He then returned to the business side full-time – see below – until ’86 when he began a three year management stint in the White Sox chain. In ’89 he returned to Boston full-time to manage the sports operation side of The Jimmy Fund and would manage one more year at nearby Pawtucket, RI, in the Boston chain in ’92. His record as a manager was 257-312. He then remained with the organization through ’98 as a roving instructor and was inducted into the team’s hall of fame in ’97. Following that run he moved to New Hampshire where he established his own company with his son Mike, the Petrocelli Marketing Group. He has a SABR bio. 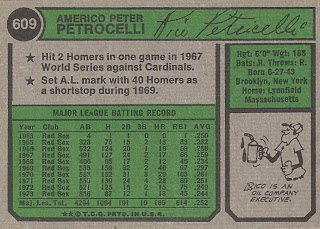 The star bullets are back and these ones feature some stuff covered above. The cartoon refers to Rico’s PR work for both Tulsa Oil and Gibbs Oil, distribution companies. He would do more marketing work in that field after his playing time. In a couple sequential cartoons in the Sixties Topps indicated that Rico played drums to help develop his wrists and keep his elbows loose. No idea as to whether that helped or hurt the bone chips situation.