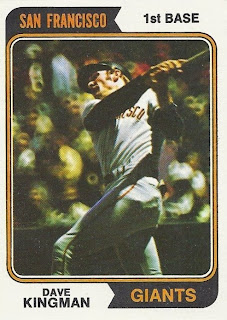 In the spring and early summer of ’76 this guy was a big deal in NY, my first summer working in the city. He was banging homer after homer and I am pretty sure went into the Al-Star break on a pace that was ahead of Roger Maris’s one in ’61. The tabloids loved his big homers and his big strikeouts and called him Kong. It was a big name and a big stage for a big guy who was actually pretty quiet. That was a few seasons away from this photo in which we get to see the mighty swing on what I would bet was a missed pitch. Dave had sort of arrived in ’72 with a pretty big homer and RBI total despite having less than a full season. But between playing positions at which the Giants were nominally well stocked – first base and the outfield – and his high strikeout totals, playing time was hard to come by early in ’73. His preferred position was actually third base and things should have gone Dave’s way when at the beginning of the season San Francisco had finally had enough of Al Gallagher and sent him to California. And Willie McCovey was starting to show his age at first so even though fellow young guys Ed Goodson and Gary Thomason were competent enough at those two positions, respectively, Dave should have had enough time to get in his starts. The trouble was that when he did start it didn’t go terribly well. He was uneven at best at third and by late August he was buried in a season-long offensive rut, hitting .183 with eleven homers and 27 RBI’s, including a hitless August by that point. But Dave was a streaky guy and from August 26th on he put up a line of .237/13/28 in just 114 at bats. Goodson helped him out a bunch by going down with a shattered thumb and fully half of Dave’s hits during that run were homers. When the Giants traded Willie to the Padres Dave was feeling pretty good about getting more playing time. That would happen but with a whole other club.

Dave Kingman moved around a bunch as a kid. Born in Oregon, he also lived in Colorado and California before he settled in a suburb of Chicago for high school. There Dave played hoops and baseball with Tom Lundstedt from a few posts earlier, and was a wide receiver and d-back in football. Dave was a big boy and his high school stats his senior year -  a .339/5/15 line in 19 games and a 7-4/1.60 mound line with 121 K’s (and 71 walks) in 67 innings – got him drafted the spring of ’67 in the second round by the Angels. But Dave wanted to go to school where he could ideally play hoops as well and he went to Harper College, a local two-year school. While there he got noticed by the Orioles, who drafted him in January ‘68, and by USC and its fabled coach, Rod Dedeaux. Dave turned down the O’s but not Dedeaux, who gave him the same deal he gave Tom Seaver a few years earlier: play summer ball in Alaska against some major college talent and if it works you’re good. So that summer Dave was a Goldpanner and while he didn’t do anything crazy great – he hit .154 and was 3-0 with three saves but a 5.46 ERA and many more walks than K’s – he was intriguing enough to get to Southern Cal. His sophomore year he pitched, pretty well too as he went 11-4 with a 1.38 ERA and 88 K’s in 85 innings. He also hit .250 with four homers and 16 RBI’s in his 22 games. When he returned to Alaska that summer his numbers were much better as well with a .323/6/16 hitting line and a 7-3/3.29 pitching one. His walks were still pretty high, though, and in ‘70 Dedeaux restricted Dave to offense. He was killing the ball at over .500 when he got involved in a nasty collision that broke his arm and tore ligaments in his leg. But those USC seasons were long and though Dave missed 30 games he still got into 32 in which his .353/8/26 line got him named second-team PAC-8 and first-team All-American. This time when he got drafted – again in the first round by the Giants – he signed. That summer in Double A he continued to hit at a nice clip, going .295/15/41 in 210 at bats, but with 64 K’s. That year he played both infield corners but was pretty challenged at third. Signs of things to come. In ’71 he moved up to Triple A where his line of .278/26/99 in only 392 at bats got him up to San Francisco by late July.

Though as noted above Kingman was a quiet guy, he made some noise with his bat and his second game up he hit a run-scoring double and then a grand slam in a barn-burner against the Pirates. He would spend the rest of the year primarily spelling Willie McCovey at first and got everyone excited with his big bangers. He didn’t hit too great in the playoffs but he came out of the box strong in ’72 while splitting time between his three positions. He put up six homers in April but started showing his streaky side with bouts of big hits and dry spells. His final power numbers were pretty good but not enough to get him a regular position since the Giants already had a player with fat strikeout totals in Bobby Bonds. After the ’73 experience Dave had a nearly similar ’74: lots of K’s and lots of errors – his fielding average at third was below .800  - leading to lots of bench time with bouts of big power. His line was .223/18/55. After that season he was sold to the Mets for $150,000.

When Kingman got to NY the original plan was to have him back up Rusty Staub, Cleon Jones, and Del Unser in the outfield as well as John Milner and Ed Kranepool at first. But Jones was coming back from a knee surgery that would help tank his career so Dave and Milner pretty much split left field while Milner’s time away from first gave Dave time there as well. He did his thing, setting a Mets record with 36 homers, knocked in 88, and hit .231 with 153 K’s. The next year he played the outfield much more and started on a pretty good tear with 27 homers by the end of June and 30 by the All-Star break, to which he was voted a starter. But shortly after the game Dave went down with a broken thumb and missed the next six weeks. By the end of the season his .238/37/87 line represented a new Mets homer record. Then things got weird in ’77 and started in training camp when he broke his nose and also got dinged in the foot by a pitching machine. That second one robbed him of his power and though Dave played regularly in his two spots and hit .300 the first month, he only had nine homers and 28 RBI’s when he was part of the big June purge NY enacted and went to San Diego for Bobby Valentine and Paul Siebert. With the Padres he returned to form with eleven homers and 39 RBI’s in his 168 at bats but he was placed on waivers anyway when he indicated he would need major bucks to sign as a free agent. The same thing happened with California, who quickly signed him and for which he had one good game. He spent the last couple weeks with the Yankees, ending the season as the first guy to play for a team in each division and with a homer for four teams in the same season. He signed too late with NY for post-season work though.

After the ’77 season the Yankees wanted Kingman but the Cubbies got him with a four-year million dollar deal. He fit into that Chicago line-up pretty well because the team had plenty of contact hitters and was able to absorb the big K totals. Dave absorbed some of that himself because his average picked up quite a bit while there. In ‘78 his line was .266/28/79 even though he missed nearly a month with a pulled hamstring. In ’79 he was healthy all year and responded with the best line of his career with a .288/48/115 as he returned to the All-Star game and led MLB in homers. In '80 he appeared headed for the same type of numbers when he slipped on a bat in late May and damaged his shoulder when he fell. He missed a bunch of time though he did return to the All-Star game and put up a line of .278/18/57 in just 255 at bats. Following that season he returned to the Mets for Round 2 in a trade for outfielder Steve Henderson. The Mets moved Dave to first and away from Chicago his average returned to its normal submerged level. In the strike season of ‘81 his line was .221/22/59 and in a full ’82, .204/37/99, a season in which he infamously – as NL home run leader – had a lower average than Cy Young winner Steve Carlton. In ’83 he was off to a crappy offensive start when a mid-year acquisition of Keith Hernandez moved Dave to some right field and pinch-hitting duties the rest of the season. After posting a .198/13/29 line he was released. Early in ’84 he was signed by Oakland and the team put Dave in his most natural defensive spot – DH. There he had a big year, winning the AL Comeback Player award with a .268/35/118 line while bolstering a young offense. His average slipped a bit the next two years but not his power as he hit over 30 homers each season, closing with 35 in ’86, his last year. He finished with a .236 average, 442 homers, and 1,210 RBI’s. He also had 1,816 K’s – about one every 3.7 at bats - and a .302 OBA, both which seem destined to keep him out of the Hall. In the post-season he hit .111 in his four games. He is currently 38th all-time in homers and 15th in homers per at bat.

Kingman seems to have lived a pretty quiet life since he retired. He played a season in the Senior League and eventually relocated to the Lake Tahoe area where he was running his own tennis club in 2008 according to an article in The Daily News. He has since been spotted at card shows and other baseball-related events where he is widely regarded as charming and outgoing. 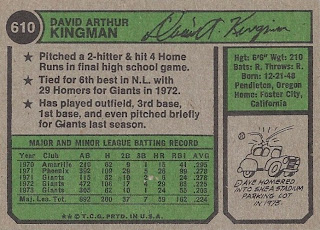 Dave’s only bit of MLB pitching was in ’73, in which he gave up four runs, six walks, and rang up four strikeouts in four innings of work. That homer in the cartoon broke Dave’s drought and was hit in an August game against Ray Sadecki, giving Ron Bryant his 20th win. Dave had four RBI’s in the game. He also had that monster shot at Wrigley and could hit massive pop flies and foul balls as well. A couple times at Shea he also hit balls that landed in the parking lot behind home plate. Dave has his own site at which you will find more info about his career than you could possibly want to know.

One of the bigger trades from this set helps here: