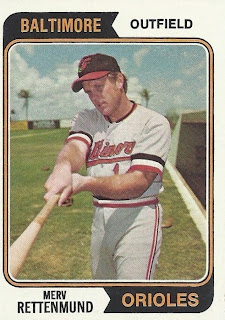 In a nearly identical pose to the one on his ’73 card, Merv Rettenmund gives us that staring down the bat handle thing. Merv’s not smiling in this photo like he was in ’72 though, and he had reason not to in ’73. After a hot start for a couple weeks his offense faded pretty quickly and by mid-season he was losing starting time in right field to new guys Rich Coggins and Al Bumbry. It was a continuation of the flameout that was initiated partly with a shoulder injury he suffered in ’72 and led to the trade pictured here. Judging from the palm trees in the background I’d say the regular card photo is a spring training shot. The Traded card photo appears to be from Yankee Stadium. It would take a little while for things to get right again for Merv but before too long baseball would be a happy place for him again in very different part of the country.

Merv Reteenmund grew up in Flint, Michigan, where he is still legendary as a football and baseball star and where his dad played semi-pro ball. Merv preferred the latter sport and his dad pushed him to sign after high school but when Ball State of Indiana offered him a full ride to play both sports Merv opted to go in that direction. Merv had great wheels and while at Ball State he broke a single season rushing record and for his career averaged 7.6 yards a carry, still the school record. He got hurt in the third game of his senior year, though, and missed the rest of the season. In baseball there he hit .321 for his career and after his senior year he played in the Basin League, the Upper Midwest and Canadian summer college showcase. He was runner-up for the league mvp in ’64 and played with and against Del Unser, Jim McAndrew, Don Sutton, Ken Suarez, Dick Billings, and Clyde Wright, to name a few. It was in that league that he first began playing in the outfield; he was normally a catcher up to that point. In November of ’64 Merv signed with Baltimore, a day before the Cowboys drafted him in a late round. He kicked things off in ’65 with a .244 season with a bit of power and lots of speed in A ball; once the O’s saw his wheels he was strictly an outfielder. In ’66 he upped his average to .307 and nearly doubled his homer and RBI totals to 21 and 69 respectively at the same level. He had a big season in Double A in ’67, hitting .286 with a .411 OBA and 29 stolen bases. That helped get him on the Baltimore roster to open the ’68 season and though Merv hit well in his couple plate appearances the outfield was crowded and he went down to Triple A where his .331 average, .459 OBA, and 22 homers in under 400 at bats got him that year’s TSN Minor League Player of the Year. It also got him a one-way ticket to Baltimore. 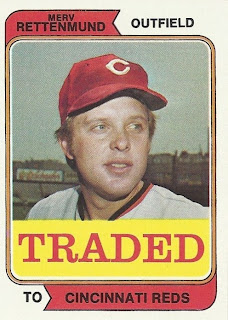 1969 was a good year to be a part of the Orioles, at least if you weren’t a rookie outfielder trying to get a regular spot already manned by three All-Stars. While Rettenmund performed well enough as the fourth outfield guy it was a frustrating season for him and he nearly quit to teach full time – he got his BS in Education from Ball State in ’66 – before his Series check made him decide to hang out. In ’70 his plate appearances moved up after Paul Blair went out following a beaning in late May. Merv made the most of the opportunity by leading the Orioles in hitting, stealing 13 bases, and providing pretty good power in what amounted to just over half a season. He then hit .375 with three RBI’s in his three post-season games. He continued on the same track in ’71 when he again led the team in hitting, upped his OBA to .422, and stole 15 bases. Against Pittsburgh in the Series he hit a big homer to help win the first game though he cooled off after that. Partly as a result of Merv’s performance the O’s shipped Frank Robinson to the Dodgers after the season and Merv was given the starting job in right field. But things went south for Merv pretty quickly. Pressing himself to replace Robinson’s power he messed up his already unorthodox swing and had to work his way up to a .260 average by early July when he dinged his shoulder hard making a diving catch in a game against Detroit. He didn’t miss too much time but the injury arrested his average getting better and he later went down for real that year when he tore an ab muscle. The O’s missed the post-season for the first time since ’68 and a year later Merv moved to Cincinnati.

Things didn’t improve with Rettenmund’s move to new surroundings. He returned to an outfield reserve and was basically a stopgap as the Reds transitioned to developing guys George Foster and Ken Griffey. In his two seasons in Cincinnati Merv hit only .227 in under 400 at bats, though his OBA wasn’t bad and he stole ten bases against only one pick. He also won his second Series ring but he was pretty happy when right after the ’76 season began he was sent to San Diego for infielder Rudy Meoli. That year wasn’t exactly a salve for his general hitting woes as he basically matched his Reds average overall. But his OBA was .361 and he did very well as a pinch-hitter, putting up an even .300 average in that role. That was a telling stat and would be Merv’s prime position the duration of his playing career. In ’77 he upped his overall numbers to a .286 average and a .432 OBA and in the pinch was pretty fantastic with a .328 average and a .451 OBA with a record 16 walks in that role. In May he had two consecutive rare games in the field in which he had four RBI’s. He became a free agent after that season and moved up the coast to Anaheim. There in ’78 his pinch average wasn’t so hot at .153 but of his two hits in that role one was a grand slam and his OBA was still quite good at .352. Overall he hit .269 with a .433 OBA and mot of that time was spent as a DH. In ’79 he hit .263 overall and in the pinch hit .417 with a .533 OBA. After a couple games in 1980 he was released in June. Merv was done then with a .271 average, 66 homers, 329 RBI’s and a .381 OBA. He hit .183 with eight RBI’s in 29 post-season games.

Rettenmund made a lot of fans late in his career with his pinch hit work and before he was released as a player he was already coaching for California. He did that through ’81 and was then the team’s director of minor league hitting. From ’83 to ’85 he coached at Texas for buddy Doug Rader but was let go when Rader was canned. From there it was minor league (’86-’88) and then MLB (’89-’90) hitting coach for Oakland. Then it was back down the coast to San Diego (’91-’99 and 2006-’07) in between which he coached for Atlanta (2000-’01) and Detroit (’02-’05). Since ’07 he has been retired from the MLB level but has continued to coach some travel teams in the San Diego area. 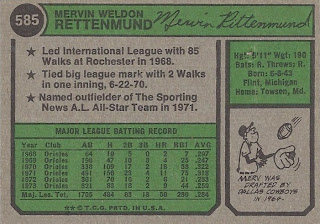 Merv sure has a full formal name, doesn’t he? It nearly crowds out his signature. He has star bullets and a cartoon that has been alluded to above. He was not a participant in the ’71 All-Star game and I do not have access to see the other members of that TSN team. Merv did one of those Orioles trips to Japan early in his career and became a travel nut in off-seasons. His wife liked it so much she became a travel agent in the southern California area.They later had a granddaughter who was the place kicker for her high school football team. 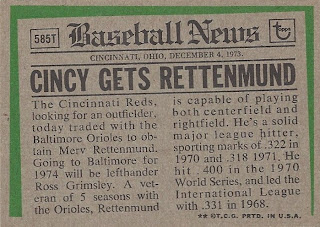 Topps gives Merv a nice little write-up on the back of his Traded card. The Orioles also got Junior Kennedy in the deal and, no disrespect to Merv, got the better half of the trade. It did get him on the way to the left coast though, where it seems he had his most long-lasting success.

The hook-up takes us through St. Louis: