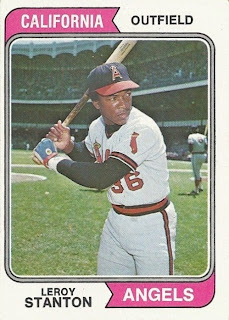 For a guy involved in one of the biggest trades ever it can be frustratingly difficult to find information about Leroy Stanton during certain periods of time. Like his youth. But that was long ago by the time this card came along, depicting Leroy at Yankee Stadium, not terribly far from another field on which he briefly played. If that is a “6” on the back of that uniform behind Leroy, it’s Ellie Rodriguez; if it’s an “8” it’s Rick Stelmaszek. Primarily a right fielder in ’73, Leroy’s playing time took a bit of a hit that season as he split time there early on with Bob Oliver and later with Richie Scheinblum, who’d been picked up mid-year from Cincinnati. Leroy could be a pretty good power guy and though his eight HR’s that year were below expectations, he did tie a team record when he launched three in a game against Baltimore. He had a bit of trouble in the strikeout department but he could run and he had awfully good range in the outfield. He would spend the bulk of his career with the Angels, at least as a player, and he alone would have been an excellent pick-up for the guy California lost. But then there was that other guy...

Leroy Stanton was born and raised on a farm in rural South Carolina and at some point around his chores he made enough noise in baseball to get signed as a free agent by the Mets early in the summer of ’65. That first year he hit pretty well in A ball but dropped a few points when moved down to Rookie ball late in the season. He then missed all of the next two years to do his military hitch stateside which is one of the longest service requirements of the set. He returned in ’68 for a good year in A ball and then pared down his numbers a bit in a ’69 spent in Double A, a year he also stole 17 bases. In ’70 and ’71 he put up excellent numbers at Triple A Tidewater, making his debut in NY in September of the earlier year. His first three at bats were all pinch hit appearances before he got a start against Chicago on the 28th. His first at bat he rocketed a triple to the corner and rounding second his helmet came off. As he slid safely into third, the Billy Williams throw pegged him in the back of the head, ending his season. That’s a tough way to get a first hit! He got some more late looks in ’71, none nearly as dramatic as the prior year, and after the season he, pitcher Don Rose, catcher Frank Estrada, and another pitcher named Nolan Ryan were sent to the Angels for Jim Fregosi.

In ’72 Stanton was still a rookie – he shared his first Topps card with Buzz Capra and Jon Matlack – and that spring he won the starting job in right field. He started slowly and struck out once every four at bats but revived his average a bunch over the season and led AL right fielders in fielding percentage. In ’74 he won the right field slot pretty much uncontested after a great spring. He was also off to a hot start that year at the plate and was hitting .390 in late April when his left hand was shattered by a pitch. He missed a month-plus but returned to post his best season to date with .267/11/62 numbers. He upped that in an un-injured ’75 when he corralled his K numbers a bit, pretty much matched his ’74 average and upped his power numbers to 14 homers and 82 RBI’s to lead the team. He also established a new team record in outfield assists with 16; that number also led the AL. But ’76 wasn’t much fun. The Angels put up another big trade prior to that season, obtaining Bobby Bonds for Mickey Rivers and Ed Figueroa and Bobby took over right field as Leroy got moved to the fourth guy. As his plate time came down hard so too did his offense and he finished with a .190 average and only 25 RBI’s. After the season he was selected by the new Seattle Mariners in the expansion draft.

In his first season in Seattle Stanton had a sort of I-told-you-so year in  his biggest MLB season, hitting .275 with 27 homers and 90 RBI’s as he and Danny Meyer teamed to give the Mariners a potent power duo. But that revival was short-lived and after Leroy’s stats shriveled to a .182/3/24 season the next year he was released. In ’79 he put in a season in Japan where his line of .225/23/58 was augmented by 136 K’s in his 457 at bats. In ’80 he returned to this hemisphere and the Angels, but this time the Mexican League franchise in Puebla. That was his final season as a player and Leroy ended up with a .244 average, 77 homers, and 358 RBI’s. In the minors he hit .290.

In ’81 Stanton tried out for the Blue Jays and made the franchise, but as a coach. He remained in the Toronto system through at least the ’95 season, nearly all that time as a hitting coach. He got a couple rings when the team won the Series. After that things get a bit sticky. He’d always lived off-season in South Carolina and the author of a book about the Angels found him there driving short-haul truck routes for his own company there. He appears to still be at that line of work, at least on the ownership side. 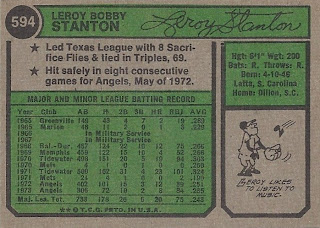 Leroy had ten triples two years running. He also liked pool; that’s a good double. When the big trade to the Angels happened, Whitey Herzog was the director of minor league operations for the Mets. He was asked to try to get Leroy back from California after the trade. When he was told the club gave him up for Fregosi Whitey was pretty infuriated. And that was before he knew that Ryan was also in the deal.

These two guys were Mariners, but a bunch of years apart. But the Angels had a big trade following the ’72 season also:

Andy Messersmith works also, going the other way.
Posted by wobs at 11:59 PM