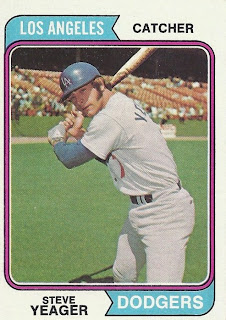 This photo finds Steve Yeager in the midst of his second season of catching in LA. After being called up in ’72 to be part of the milieu behind the plate in the wake of Tom Haller’s departure he stayed up all of ’73 to play behind Joe Ferguson and his 25 homers. It had taken Steve a while for his bat to catch up to his catching prowess and he would never be a super hitter. But he hit pretty solidly in his two seasons in LA and that would help get him into the line-up on a regular basis going forward. But ’73 had some rough spots. On June 20th Ferguson broke his thumb in a game against Atlanta, providing an opening for Steve, who was hitting .280 at the time in limited at bats. But in the 15 games he started during Joe’s absence he hit only .108. He would then sit for about a month before he returned to add over 50 points to his average down the stretch. For now he looks pretty content on a sunny day at Candlestick.

Steve Yeager grew up in Dayton, Ohio, where in high school he was a star in the big three sports and was a fourth round pick by the Dodgers in ’67. He had to finish a state tournament that summer so started his A season late but barely played because he wasn’t hitting too well. That was the theme in each of the next two seasons as lousy averages kept him on the bench a lot but his ability to call games and his toughness behind the plate kept him on the roster. That was illustrated when he played on a broken leg during ’69 and then also missed a bunch of time on the DL. In ’70 he moved up to Double A, hit much better, and got some starting time. Then in ’71 he maintained his hold on that starting spot at the same level, upping his numbers considerably. After a slightly better start in Triple A in ’72 he got called up to LA that August in the wake of Dick Dietz breaking his hand.

In ’72 the Dodgers catching situation was a bit of a hodgepodge as Chris Cannizzaro, Duke Sims, and Dick Dietz all spent time at the position. But by the end of the year Dietz got his injury, Sims followed Tom Haller to Detroit, and Cannizzaro just didn’t have enough stick so Yeager came up, got himself in a slump, and later pulled his average up to respectable. In ’74 he began the season with a hot bat as Ferguson got hit with a sophomore jinx and by the end of July Steve still had a .300 average and now the starting gig behind the plate since Ferguson could also man the outfield. Steve’s average would fade but not his defensive work as LA went 64-28 during his starts that year. And he bounced at an appropriate time in the post-season as he hit .364 in the loss to Oakland. In ’75 he fractured his knee to start the season but then had his busiest year as Ferguson too was one of many Dodgers to see DL time and though Steve’s average shrunk to .228 he upped his RBI total to 54. In ’76 he went down again after he was speared in the throat by shards off Bill Russell’s broken bat while in the on deck circle. That year Ferguson was traded to St. Louis and the following one Steve had his best offensive year with a .256/16/55 season in 359 at bats as he played ahead of veterans Johnny Oates and Jerry Grote. That was also the year LA returned to the Series and Steve was again a main offensive threat, hitting .316 with five RBI’s in six games. In ’78 a year-long slump and missed time to some cracked ribs had LA bring back Ferguson mid-season as Steve bottomed out with a .193 average in just 228 at bats. In ’79 he put up better power numbers with 13 homers and 41 RBI’s but his average only got to .216 in a big slump year for the Dodgers.

By 1980 Yeager had a nagging elbow injury that would limit his time in the field and with his average pretty much entrenched in Mendoza territory his playing time withered a bit more. That year he split time with Joe Ferguson and rookie Mike Scioscia. In ’81 Scioscia took over as the main guy and Steve barely played, racking up only 86 at bats in the strike year. But in the extended post-season he hit well and in the Series against the Yankees’ lefty-dominated rotation, he played in every game. It turned out to be an excellent fit as he hit .286 with two homers and four RBI’s to share the MVP award. In ’82 he continued in his back-up role and though he missed a month to a broken wrist, he upped his average to .245, his highest in five years. In ’83 he moved to the number one spot as Scioscia missed nearly the whole season to injury and though his average slid to .203 Steve hit 15 homers with 41 RBI’s. The next two seasons he returned to reserve work, in ’84 suffering knee damage in a plate collision. By ’85 he and Bill Russell were the only two left of the young guys who revived the franchise in the mid-Seventies. After that season he was sent to Seattle for Ed Vande Berg. He then finished his playing career in an ’86 with the Mariners in the same role. Steve wrapped things up with a .228 average with 102 homers and 410 RBI’s. In the post-season he hit .252 with five homers and 14 RBI’s in 38 games. In the field he twice led the NL in picking off runners and also led once each in putouts and assists.

Yeager did some community work with the Dodgers after his playing career ended, but his main professional work was elsewhere in the LA area: as an adviser, trainer, and actor in the Major Leagues movies. He did consulting work on other sports movies as well. He also hooked up with a company called Collectibles International, for which he was a spokesperson. The company purported to be a seller of franchises by which to make money in sports collectibles, but it turned out to be a sham shop. By ’99 Steve was back with the Dodgers full-time as a coach in their system. He coached there as well from 2004-’07. From 2000-’01 he managed the independent Long Beach Breakers and then in ’08 managed the city’s new independent franchise. Beginning in 2010 he became a spring training and roving minor league catching coach for the Dodgers and this year he has had that role in LA. 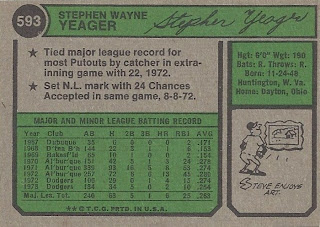 These two star bullets are worth investigating. The game was only Steve’s sixth MLB one and it occurred at Riverfront. That is a ton of chances for a game, seemingly, but this one ran 19 innings and Steve was behind the plate for all of them. That’s pretty amazing. All the putouts were strikeouts: Tommy John K’d 13 guys in his nine innings; Jim Brewer six in his three; Pete Richert one in two; and Ron Perranoski two in three innings. LA gave up only eight hits and two runs and still lost the game. He also got two assists for gunning down Tony Perez (fifth inning) and Joe Morgan (ninth) when they attempted to steal second. He missed nailing Bobby Tolan on another steal later and dropped a pop fly foul by Darrell Chaney, who flied out in that at bat. I guess that makes 24 chances though I’d count the assists also. Steve was related to fighter pilot and “The Right Stuff” profilee Chuck Yeager, who famously broke the sound barrier for the first time. He was on Family Feud, danced on Solid Gold, and posed for Playgirl. Sounds like he belonged in LA.

The link here was a big free agent signee for LA but nobody likes to remember that: