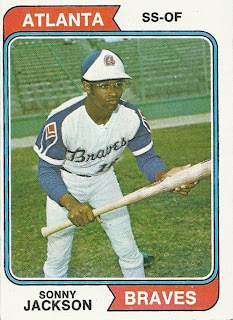 There is only one fan in the Atlanta stands behind Sonny Jackson on this card but there are a few things going on here. One is that Sonny is one of a very few non-pitchers who sports glasses. Two is that he may be the first and only player in the set designated as a shortstop-outfielder. And three is that this is Sonny’s final card which has been a bit of a trend lately. Sonny had a significant mark-up in his plate time in ’71 when, in the wake of Rico Carty’s knee injury he was moved to center field as the Braves had to juggle their line-up. But the next year in the wake of Rico’s return, new young regulars – Marty Perez at shortstop and Dusty Baker in the outfield, and his own injuries, Sonny’s field time waned considerably. In ’73 he was relatively healthy but was primarily a reserve, splitting time between shortstop and left field. Sonny’s pose here looks like it is about halfway between a bunting stance and an “I’m gonna knock your head off” stance. Good thing he wasn’t looking at the photographer.

Sonny Jackson grew up outside DC and went to Montgomery Blair High School in Blair, MD, where he captained each of his big three teams his senior year, leading his baseball and football ones to a county championship and his basketball one to a state title. He was a high–scoring guard in that last sport and most of his senior year he was courted by the University of Maryland with a scholarship to play hoops and baseball. That year was 1962 and if Sonny chose to attend the school he’d have been the first black ACC athlete. Instead he signed later that summer with the Houston Colt .45’s, a choice he made because he thought an expansion team would get him up top quicker. He was right and after a big first season in ’63 in A ball hitting .297 and stealing 61 bases, he made his Houston debut in a late September game in which every starter was a rookie (Houston got destroyed by the Mets 10-3). He would also get some late-season looks each of the next two years but spent most of that time in the minors. In ’64 he hit .285 while swiping 45 bases in Double A and in ’65 in Triple A he hit .330 while stealing 52. All that time he was a shortstop and while his error totals were a tad high he made up for that with excellent range. In ’66 he made the big club out of spring training.

Jackson had a big rookie year, putting up the best average of his career – shades of recent subject Hal Lanier – while finishing second in NL ROY voting to Tommy Helms. His DP partner was Joe Morgan with whom he shared his first rookie card in ’65 (he had another one in ’66 he shared with Chuck Harrison). He made the Topps team that year but had a tough follow-up year when he missed a month from a leg injury and his average and stolen bases tumbled hard. After the season he and card-mate Harrison were sent to the Braves for Denny LeMaster and Denis Menke. Sonny’s first few seasons in Atlanta were marred by injuries as his average during that time more closely resembled his ’67 one than his ’66 one. In ’68 he missed all of August to a bad knee. In ’69 he had done a nice job resuscitating his average when he missed nearly two months in the summer, again to kee damage. Then in ’70 he got spiked hard in his leg, missing another 45 games. After his move to center in ’71 he returned to Triple A to begin the ’72 season for rehab after hurting his ankle in spring training. When he came back he put in time at center and third base before returning to shortstop in late summer to swap time with Perez. After his reserve work in ’73 he spent most of ’74 in Triple A where he hit .285 while splitting time between those three positions. He only got into a couple games that year with Atlanta and following the season was released. He signed with the Padres for ’75 and hit .255 while playing second and outfield for their Triple A club and moved to the White Sox in ’76 where he hit .273 while switching between shortstop and third base at the same level. That was Sonny’s final season and he finished with a .251 average with 126 stolen bases up top and a .291 average with 181 steals in the minors. In his sole post-season appearance he only did defensive work. 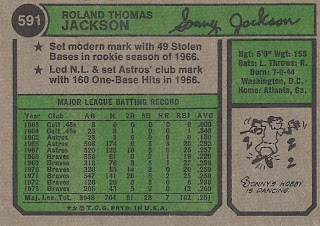 It appears that Sonny used a marker for his signature. He really did have a big rookie year, didn’t he? He also led the NL in sacrifice hits with 27 that year. He is a cousin of Derrell Thomas, who was a Padre then. He is married to Corliss Jackson who may or may not be the woman that runs the business helping people get federal jobs that is pretty high-profile. They live in Florida.