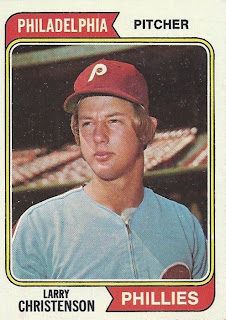 The latest big deal rookie of the ’74 set is Larry Christenson and this is his rookie card since at this time the prior year Larry was still playing high school ball. Larry had a pretty good debut in ’73, sticking with the MLB roster out of camp when he was just 19. He threw a five-hit complete-game win at the Mets in his first start ever, giving up only one run. Tellingly, he also walked six in that game and a little wildness and too many big hits given up would have him back in Triple A by early June. There he didn’t throw much better though his control got more balanced and his record moved back to the winning side. Larry would be a Phillie his whole career and would battle through lots of injuries to do pretty well. Here he casts a glaze in Candlestick probably not too soon before he was sent down. But he’d be back pretty soon.

Larry Christenson grew up in Washington State where he played nearly everything, including in high school tennis, cross country, baseball, and basketball. That last one was his biggest sport and during his senior year in which he averaged 21 PPG as a forward he was recruited by all the Pac-Ten schools. He was headed in that direction when he sort of exploded in baseball that spring, going 7-2 with a 0.28 ERA and 143 strikeouts in his 72 innings. He also hit .406 and stole eleven bases. That June of ’72 the Phillies made Larry the third pick of the draft and after a very good start in Rookie ball that summer he joined the Phillies out of the gate in ’73.

In ’74 Christenson went 11-9 with a 3.30 ERA and much better control in Triple A before returning to Philadelphia late that August to go 1-1 in some relief work with a 4.30 ERA and a couple saves. He again began the next year in Triple A but after 12 shutout innings in his two starts he was back in the pen by mid-May. By mid-June he was in the rotation and he finished the year 11-6 with a 3.67 ERA and only 45 walks in over 170 innings. In ’76 he upped his win total to 13 with the same ERA but missed some time due to injury. He had a chronic bad back since high school and as a result would suffer occasional groin pulls. A good hitter, that year he teed off a couple solo homers in a game against the Mets. In ’77 Larry had his big year, going 19-6 with a 4.06 ERA and doubling his strikeout totals from the prior year. He also had his first playoff action. Then in ’78 his record was a disappointing 13-14 but he lowered his ERA nearly a run and topped out his complete game (9) and shutout (3) totals. Then in ’79 the injury bug bit him hard and before the season even began. He’d signed up to do an 1,800 mile bike ride – that’s pretty impressive – for charity back on the left coast and was going at a pretty good clip on the tour in February when he fell off the bike and broke his collarbone. While the initial injury was bad enough, it got worse when after the season started the collarbone developed a spur that required surgery. He missed a ton of time and for the year went 5-10 as his ERA flew up to 4.50. It would be more of the same the next two seasons as he lost time to elbow injuries, more groin pulls, and a smash to the knee on a comebacker. In ’80 he went 5-1 in his 14 starts and in ’81 4-7 around the injuries and the strike. In ’82 he had a relatively healthy year, going 9-10 with a 3.47 ERA in his first season of over 200 innings since ’78. But the rebound was short-lived as in ’83 after a not bad start – 2-4 but with great control and a 3.91 ERA – he hurt his elbow again and required two more surgeries. The Phillies released him after the season – on his birthday! – and Larry was done with a record of 83-71, 27 complete games, six shutouts, four saves, and a 3.79 ERA. In the post-season he was 1-2 with a 7.40 ERA in six games. He hit .150 for his career but with eleven homers and 46 RBI’s in 427 at bats.

Christenson was only 29 when Philadelphia let him go after the ’83 season and he had a deal with the club that if he rehabbed successfully they would take him back. So the next couple years that was what he did, for a while returning to do some kinesiology work with a certain Dr. Mike Marshall, former LA reliever. But the rehab never really worked and by ’86 he had moved on to a new career as a financial advisor, which he began in earnest after moving back to the Philadelphia area – where most of his professional contacts resided – in ’87. He worked on the advisor side through ’94 and then moved to the investment management side that year for the next ten years, part of it with Phoenix Investment Partners, a huge money manager. In 2004 he founded his own business, Larry Christenson Investment Partners, which offers products and services to investment managers. It has been a pretty successful run for him and has allowed him to be very involved in charitable work and occasional appearances on behalf of his old team. He continues to reside in the Philadelphia neck of the woods. 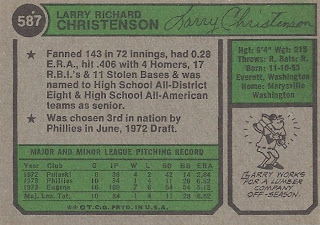 There’s Larry’s high school record as a senior so I didn’t need to plow through those old news articles. Who were the two guys chosen ahead of Larry? We’ve seen one of them already and the other would have his Topps unveiling in the ’76 set: Dave Roberts, third baseman from the University of Oregon was selected first by the Padres; and Rick Manning, then a high school shortstop from the Niagara Falls area in NY, was selected second by Cleveland. I do not know what Larry did for the lumber company in the off-season but given the status of his back, I hope it wasn’t swinging an axe.

These one-team guys can be tough: