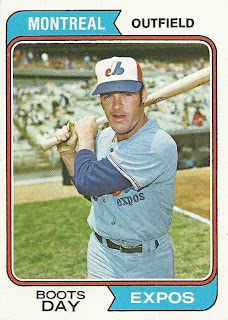 Here’s another guy with his final Topps card. Boots Day – almost sounds like a sales event at a shoe store – is shown taking a cut at Shea in what was his third and final year as a platooning regular in Montreal. Boots shared the center field duties for three seasons with Ron Woods, Boots as the lefty and Ron as the righty. In '73 Boots had a pretty good bounce in his average from the prior season but his at bats were way down because he pinch hit about as many times as he played the field. While he wasn’t as successful in that new role as Merv Rettenmund from a few posts back, he did hit .260 in the pinch with a pretty good .351 OBA. He also won a couple games in a row in June to get the Expos to and over the .500 mark for the first time that late in a season. And though this is his last card he wasn’t anywhere near done playing, and doing that in some creative ways.

Charles Day was born and grew up in Ilion, NY, a town not far from Utica and pretty much midway between Syracuse and Albany. In high school he played hoops as a guard and in baseball was a pitcher/first baseman, going 17-1 for his career. In both sports he went up against Dave Cash, who played for Utica. Boots graduated undrafted in ’65 and then went to nearby Mohawk Valley Community College for a year during which he was signed by St. Louis that winter by his former high school principal, who also happened to be a Cardinals scout. He only pitched a couple innings that year in A ball but, converted to an outfielder to take advantage of his speed, he hit .242 while showing some good power with 15 homers and 71 RBI’s. In ’67 at the same level he threw one shutout inning and upped his average to .275 with 13 triples, 70 RBI’s, and 21 stolen bases. In ’68 he put up a .295/17/67 season in Double A with twelve steals and then after a hot spring training in ’69 he moved up to Triple A. There he hit .262 with 16 steals, seven triples, and 45 RBI’s in a bit over half a season that sandwiched his June debut in St. Louis. After the season he was traded to the Cubs for pitcher Rich Nye, a Topps Rookie team member in ’67. For Chicago Boots made the Opening Day line-up but only played a tiny bit prior to a May trade in which he went to Montreal for catcher Jack Hiatt.

For the Expos Day did some late game stuff the balance of the month and was then sent down to Triple A where he put up a .294/10/39 stat sheet in half a season. He returned to Montreal in mid-August and brought his hitting with him, quickly escalating his average to over .300 and keeping it there through late September before a late swoon pulled it down. When he started during that run it was in center field, which would be his position the majority of his time in Montreal. Ron Woods joined the Expos in ’71 and for the next three years the two swapped time there with Boots batting primarily against right handers. He would normally hit from the top of the order so his RBI totals were a lot lighter than in the minors. He had his best offensive year in ’71 when he also stole a career-best nine bases. After a bit of a slump year in ’72, ironically his busiest MLB season, he bounced in ’73. In ’74 the Expos acquired Willie Davis to play center every day so when Boots started, which was rarely, it was in left field. He also pinch hit a bunch, but with limited work hit well below .200 in that role. In early August he was sent down to Triple A where he hit .333 in limited work but also returned to the mound, throwing four shutout innings, and first base. In Montreal, he hit .185 in only 65 at bats in his last work up top. He was released during spring training of ’75 and then signed with Detroit and for the next four years would split time at the team’s Evansville Triple A franchise in the outfield, at first, and on the mound. During that time he hit .253 while averaging four homers and 35 RBI’s and as a pitcher went a combined 3-2 with a save and a 3.52 ERA in 115 innings. He retired after the ’78 season when his average was the same – after moving the decimal point – as his ERA and it was evident he wasn’t going to get called up as a pitcher. Boots finished with an MLB average of .256 and in the minors hit .270 while going 7-5 as a pitcher.

In 1979 Day went up to Detroit as a coach, batting practice pitcher, and advance scout. In ’80 he returned to the minors as a coach and then, when there were some early injuries to the Detroit mound staff, started pitching again. He threw well in A ball – 2-0 with a 1.06 ERA in three starts – but not so great in Triple A where he went 2-3 with a 6.27 ERA, ending his playing time at that level for real. He continued to coach in the Detroit system and then managed from ’82 to ’83. He was then a scout for the Tigers, the Cardinals, and the Royals through ’92 before coaching in independent ball the next two seasons. He managed for the last time in ’95, back in Evansville, now a Frontier League team. Overall as a manager he went 93-112. He then returned to scouting, for Cleveland and the Yankees, before becoming a coach in the St. Louis system (’99-2003); Kansas City system (’04-’06); and the Washington system (’07). Then it was back to independent ball: the Lancaster Barnstormers (’08-’09); Normal Cornbelters (’11) – where the manager was Hal Lanier; and back in Evansville with the Otters (’12-present). 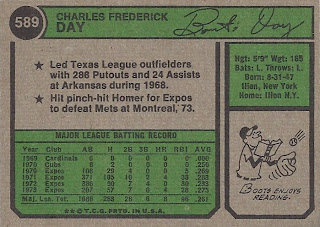 Boots is a little guy and lots of articles back then indicated he wished he was 5’9”. It was the main reason he was not taken seriously as a pitcher in the pros. His nickname came from when he was a baby and was given him by his sister because his feet were so big. Topps looks like its reaching for star bullets for Boots so here’s a good one: he went 6-for-6 in a game in the minors in ’68.

So Boots and Hal were together in 2011 but that doesn’t help us here. But this guy does: