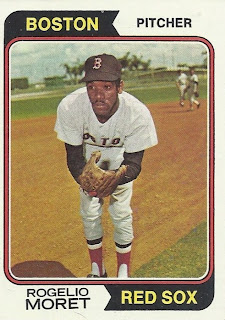 On just about every one of his Topps cards Rogelio Moret is bending over. It may have been because at 6’4” (minimally) it was hard for him to fit in the frame otherwise. This card is a busy one and Rogelio appears to be around third base so those are probably infielders behind him but I can't put a finger on who they are. Rogelio had what for him would be a typical multi-faceted season in ’73. Up for good to begin the season he threw shutout ball his first 15 innings, which encompassed a start and two long relief outings. He tore a ligament in that third game after getting hit covering first base and missed the next month. When he returned at the end of May the Sox brought him back slowly and he didn’t get another start until July 4, when he shut out the Yankees. Then Boston didn’t start him again until August 2 – what was wrong with those guys? – when he shut out the Yankees. Finally the Sox got smart, left him in the rotation, and by early September Rogelio was 11-0. He cooled off a tad that month but he had the best winning percentage in the AL, got a “10” card from Topps, and was set to go. Nobody was going to stop him except Rogelio. Which was – sort of – exactly what happened.

Rogelio Moret was born and raised in Guayama, Puerto Rico where he played ball in high school and then winter ball for the Santurce Crabbers where he was discovered and then signed during the ’67-’68 season by Boston. Sent to A ball that summer, Rogelio put up a nice season though his control was a bit out of whack, which would be an issue throughout his career. He remained in A ball in ’69, doubling his win total. In ’70 he pretty much matched those numbers up a rung and made his debut in Boston in three games in September, winning his only start. He then took his game to Triple A in ’71 where he again had similar numbers around a brief May call-up. He returned to Boston in mid-August, got some starts in September, and threw a shutout against the Senators in his last start. But he posted his biggest numbers that winter when he went 14-1 with a 1.82 ERA to win his league’s mvp award. The Sox were pretty excited about his ’72 season but after a poor spring contributed to by some nagging shoulder injuries he ended spring training doing rehab work in the minors and only made some token appearances in Boston. He spent most of the season back in Triple A and it wasn’t a very good one. But after a pretty good winter – back then Don Baylor, Dusty Baker, and Buck Martinez were on his team – Rogelio got the nod in ’73 and gave the Sox an excellent season.

Moret’s follow-up season to his big breakthrough was better in that he wasn’t injured but the numbers weren’t nearly as good as he again began the season as a spot and long relief guy and through June had only started four games, completing two of them. He’d had knee surgery the prior November on his right leg, the one injured the prior spring and that had been re-injured in winter ball. He then returned to the rotation full-time in July and did well enough but the overall results were middling as he went 9-10 with a 3.74 ERA. In ’75 he began the season again in the pen, lost three weeks to an abdominal injury, and by late May had only gotten into a few games and had a fat ERA. But by the end of June he was 5-0 and had pulled his ERA down a couple runs when – following the script – Boston put him back in the rotation. Things generally went well from that point on as Rogelio finished the season with a 14-3 record and a 3.60 ERA. The word “generally” is used because in late August he was involved in a car accident in Jersey in which he nearly got beheaded. He was fine but after initially telling the team he was rear-ended by a semi, it later turned out he was the one that caused the accident. That and some other aberrant behavior made Rogelio expendable so even though he again led the AL in winning percentage and did some OK work in the post-season, that December he was sent to Atlanta for Tom House.

Moret’s year with the Braves was pretty messy. Again sent to the bullpen to open the season he began the year with another big ERA but this time didn’t start the year undefeated and never really came out of his funk. He got a couple starts in mid-May and then a few in June, all of which were less than spectacular, though not horribly so. But after a June 29 start he sort of disappears for pretty much the rest of the summer. He didn’t go to the minors and there is no indication he was injured but in one article written later it was mentioned that he had an “episode” that required some rehab. He would throw in a couple games in mid-September but that was it as he finished 3-5 with a 5.00 ERA. In December he was involved in another trade, this time going to Texas with Adrian Devine, Dave May, Ken Henderson, Carl Morton and cash for Jeff Burroughs.  Similar to his Atlanta time, a big chunk of Rogelio’s season goes missing as he didn’t appear in a game until the end of June and then missed three weeks in July. But the work he did do was better as he went 3-3 with four saves and a 3.73 ERA in his spot role. In ’78 his first game effort resulted in a save from four innings of very good relief. Then all hell broke loose. Before a game later in April Rogelio was found standing and holding out his arm holding a shower slipper. No big deal except it was estimated he held the pose for over 45 minutes and he either had to be sedated or coaxed into an ambulance and taken away for a few weeks. It would later turn out that Rogelio suffered from a form of schizophrenia which was reinforced by constant stress put on him by his extended family. Rogelio would return to Arlington in late May and throw in a few games but by mid-June he was done, spending the rest of the season undergoing therapy. He had a decent spring when he returned in ’79 but the Rangers released him anyway towards the end of camp. After sitting out that season he signed a contract with both Cleveland and the White Sox before being awarded to the Tribe. But for them he didn’t make it out of ‘80’s spring training either. He then went south and pitching for Mexican League teams went 9-4 with a 2.42 ERA in ’81 before falling to 4-13 with a 4.40 ERA in ’82. He also threw for Santurce through that winter in his final season. Rogelio went 47-27 with a 3.66 ERA, 24 complete games, five shutouts, and twelve saves. In the post-season he was 1-0 with a 0.00 ERA in his four games.

Not too surprisingly, things didn’t go terribly swimmingly for Moret after he played. He was unable to get steady work back home in PR and no baseball teams in the States would touch him. And once he stopped earning a regular paycheck his family away from his mom all dumped him. By ’85 he was living with her back in Guayama. There’d been lots of rumors that his psychological problems had been initiated by a steady diet of hallucinogens which he always denied and was never proven. But early in ’86 he was busted with some pot and sentenced initially to five years in jail that was later changed to probation. In ’92 SI caught up with him still in PR where he was making ends meet with a modest disability pension while awaiting his MLB one kicking in. He has a Facebook page which seems to indicate he now resides in San Juan – it is in Spanish – and which has a couple photos. He looks quite healthy in them. 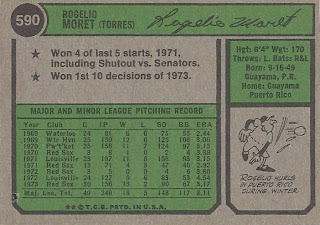 As noted above Rogelio actually won eleven straight to kick off ’73. A little more background color could have been provided with another star bullet.