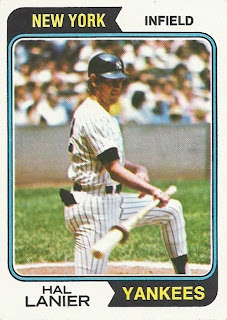 It has happened a couple times in this set where Topps goes from a guy just beginning his career to one just ending it. In the latest rendition of that segue the guy on the back end is Hal Lanier, shown in the on-deck circle at Yankee Stadium. Hal was really done in that the stats on the back of his card would be his final ones up top and by the time this card came out he wasn’t a Yankee any more but the property of the Cardinals. In ’73 Hal backed up Gene Michael at shortstop during one of Gene’s busier seasons so Hal didn’t get too much work. He’d backed up third base the prior year as one of several guys to man the position between Jerry Kenney and Graig Nettles. So his time in NY was all reserve stuff and he was basically in wind-down mode for a while. But it wouldn’t be too long before he raised his profile again

Hal Lanier was born in North Carolina in 1942, smack dab in the middle of his dad’s MLB career. Max Lanier was a pitcher for the Cardinals and by the time his career ended he had relocated first to California and then to Florida where Max attended high school. A pitcher and infielder at that level, he took his school to the state finals and then was signed by the Giants that June of 1961 for a $50,000 (or $75,000) bonus. He had also passed on a full ride to play hoops at the University of Florida. He would hit at a nice clip in the minors, beginning in D ball in ’61, when he batted .315 while playing shortstop. He moved to second base the next few years as he moved up the ladder: In C ball in ’62 he hit .312; in Double A in ’63 it was .282 as he led his league in hits; and in ’64 when he hit .327 before being called up to San Francisco. In one of the odder stat items I have seen Hal had only six walks that year in 270 plate appearances. He may have hit well in the minors but he was no Joe Morgan at getting on base.

In 1964 the Giants had Jim Davenport and Chuck Hiller splitting time at second base during the first half of the year. Neither of the two was hitting very well so San Francisco called up the hot-hitting Lanier to add some offense in the middle. To a degree Hal delivered and his .274 average was good enough to get him named to that year’s Topps Rookie Team. But other stats – especially the walk total of five in his 400 plate appearances – were more telling of his future offensive behavior. That would become evident in ’65 when Hal’s average dropped nearly 50 points though he continued to build his reputation as a very good defender. That year he also suffered a pretty nasty beaning. In ’66 Tito Fuentes came up and since he was a more natural second baseman, Hal put in some time at shortstop and by ’67 it was his full-time position. That year he topped out in RBI’s with 42 though his average continued to slide. He remained the starter through ’70 when he had his best offensive season since his rookie year. In ’71 new kid Chris Speier took over the position and Hal spent most of the year at third base. Just prior to the ’72 season he was sold to the Yankees for whom he proved to be a helpful stopgap that year since the anticipated starter at third base, Rich McKinney, sort of crashed and burned. Hal was released following the ’73 season and before ’74 opened hooked up with the Cardinals. For them that year he played every infield spot in Triple A while hitting .269 and the next year had a gig as a player coach for the same team. That pretty much wrapped up his playing career and along with the stats on the back he had one post-season at bat without a hit and hit .295 in the minors.

Following the ’75 season Hal was given his release by the Cards and found a job selling cars back in San Jose, California, where he continued to live after he left the Giants. That December the Cards came back to him, though, and offered him a job managing in the team’s system on which Hal pounced. ’76 wasn’t too hot but the next four years Hal won his league’s title twice and in ’81 was pulled up to coach in St. Louis. He did that through ’85 when he was hired away to manage the Astros. Installing a Cards-type running game in Houston he won 96 games and the division his first year as well as NL Manager of the Year. But the next two years weren’t as successful and Hal, sort of an old school guy, had some tension brewing between him and some of his players. He was dismissed after the ’88 season after having gone 254-232 in his three years. After a year off he coached for the Phillies for ’90 and ’91. He interviewed for the Yankees manager job and a couple others in ’92 but didn’t get back in baseball until ’96. Since then Hal has been managing in the independent leagues, a bunch of that time in Canada. Through 2011 he took his team to the playoffs nine of his 16 seasons and during that time he went 1,020-857. After a year of in 2012 he was named manager of the independent Yuma Desert Rats but that team later pulled out of the new league – the American West Baseball League – of which it was to be a part so as far as I can tell Hal continues to be retired. 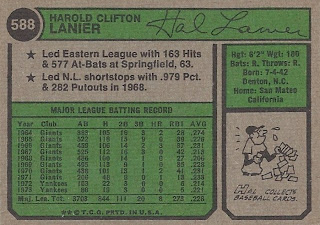 Hal and Larry get helped out big by an ex-Giant: