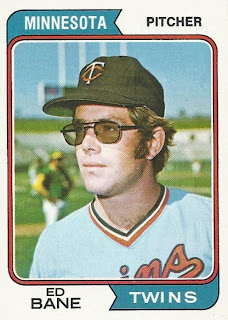 And the back-and-forth continues as another rookie card follows a final one. Here we have Ed – or Eddie – Bane in Oakland, another big deal first-timer whose debut was anticipated nearly as much as David Clyde’s was. Ed was just coming off his senior year at Arizona State and like Clyde stepped directly onto an MLB mound without a tune-up in the minors. His July 4 debut went better than Dave's as Eddie threw three-hit, one-run ball over seven innings in his first start against Kansas City. He too threw before a full house in his home debut so that $55,000 bonus he got paid dividends right away. But the bullpen then blew that game and the Twins lost. He got bombed by NY his second start but then pitched well in his next two, which were both losses as well. He then moved to the pen himself, had a nice little run, and after eight straight hitless innings had a couple saves and a 2.86 ERA. But he had some tough outings the rest of the way and finished the season without a victory and his couple saves. Now it was time for the minors.

Eddie Bane was born in Chicago, moved to the LA area, and was a quarterback and big deal pitcher at Westminster High School there. His senior year he was 11-2 with a 0.29 ERA and he’d planned on going to local Golden West College to play both sports, not anticipating going to a big school because he was a pretty little guy. But Arizona State showed up with a big push for baseball and won him over. He went 11-2 as a freshman in ’71 and then pitched for the USA in that year’s Pan-American Games. He only lost one game each of the next two years; in ’72 it was unfortunately the final one in the College World Series, in which he went down 1-0 to USC. After again losing to USC in ’73 Eddie was a first round pick by the Twins that June and he was up in Minnesota a couple weeks later.

Bane would spend the next few seasons at Triple A Tacoma. In ’74 he went 10-8 with a 4.18 ERA and in ’75 upped that to 15-11 with a 4.03 ERA. A power guy through college he had to refine his stuff a bit in the pros. That second year he returned to Minnesota in mid-September and went 3-1 with a 2.86 ERA in his four starts though he tellingly again had more walks than strikeouts. He returned to Tacoma to start the ’76 season where he went 4-5 with a 3.69 ERA as a starter before returning to the Twins in June. After a tough first start Eddie threw good ball his first month in the rotation and at the end of July was 4-2 with a 2.86 ERA. But then things cracked and he finished the year 4-7 with a 5.11 ERA in his last work up top. In ’77 it was back to Tacoma one last time where he did spot and long relief work, going 9-8 with a 4.14 ERA. He then signed with the White Sox as a free agent and for Chicago that year put in even more relief time in Triple A, improving to 7-7 with a 3.85 ERA and six saves. He then sandwiched a couple years in Mexico around a comeback attempt in the States in ’80 that didn’t go too well and finished playing after the ’81 season. His MLB mark was 7-13 with a 4.66 ERA, a complete game, and two saves. In the minors he went a combined 49-48 with a 4.22 ERA.

After playing some semi-pro ball in Alaska in ’82 Bane became a coach in the LA system in ’83. He spent the next two years managing in the Cleveland system, going a combined 74-80 with Batavia. He then had a long run as a scout with Cleveland (’84-’87) and the Dodgers (’88-’98). In ’99 he was named assistant to the GM of Tampa Bay which he did through 2003 when he returned to scouting as the Angels head of scouting from 2004 through 2010. He moved to that role for Detroit the next two years before late in 2012 signing up for another assistant to the GM role, this time for Boston. 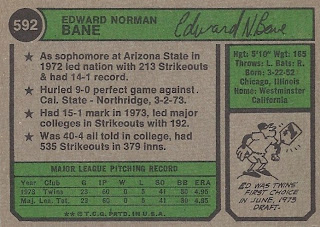 Topps covers all Ed’s Arizona State highlights on his card back. He was signed for the school by Bobby Winkles, who also has a card in this set. Ed’s brother is the CEO of Trader Joe’s, sort of an alternative supermarket. I am not terribly sure of that company’s footprint but it sure is popular in our neck of the woods (southeastern NY). Ed has a recent interview linked to here.

Try as I might, I can’t find a shorter route. Joe Hoerner would work but not enough Atlanta innings: