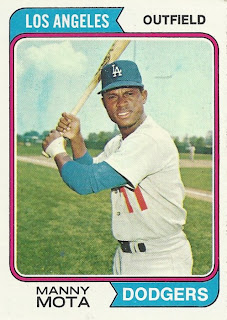 With this card we leave the AL but not the smiling faces. Manny Mota shows us his pearly whites on an equally sunny day even though he appears to have some sort of wrist injury. He appears to be at Shea, a favorite Dodger haunt back then. '73 was a good year for Manny, one of a few milestones. It was his last season as a quasi-regular and his first and only one as an All-Star. In '74 he would begin being used pretty much exclusively as a pinch-hitter, a job he actually enjoyed and one at which he would excel into his early forties. I cannot tell who that is behind Manny, although common sense would dictate that it is Bill Russell.

Manny Mota grew up in a big family in the Dominican Republic and managed to go to a local Catholic high school that was pretty high-profile in the DR. From there he moved to the country's air force, where he continued to play ball. In '57 he was signed by the Giants just a couple days after his 19th birthday and relocated to The States. That year he hit .314 in D ball, setting the tone for what would be his hitting style throughout his career: lots of singles and few strikeouts. In '58 he topped .300 again in B ball and did the same in a '59 split between all the A levels. In '60 in Double A he had a breakout power season for him - 79 RBI's - while batting .307. He spent all of '61 in Triple A, hitting .289, and then split '62 between Double A and San Francisco, where he spent the early and late part of the season as a late-inning guy. Following the season he was traded to Houston for Joey Amalfitano and then before the '63 season kicked off to the Pirates for a guy named Howie Goss (a great baseball name if I ever heard one).

Mota spent the bulk of his first season for Pittsburgh at Triple A where he hit .293. While he was up top he boosted his average nearly 100 points from that of his short '62 season. He then spent the next five seasons putting up some excellent averages as the Pirates' fourth outfielder, playing behind Matty Alou, Willie Stargell, and Roberto Clemente. During that time he began other pastimes that would occupy his time to the present day: back in the DR he had his own television show; and he also started his foundation for underprivileged kids. In '66 and '67 he ramped up his average to batting title territory and after a '68 in which he hit a very respectable .281 he got hurt that December playing winter ball back home. Pittsburgh then left him unprotected and Manny was snapped up by the Expos as the second pick in the expansion draft.

While Mota was a little slow coming back from his leg injury - which would nag him for years and partly contribute to his later move to pinch hitter - it sure didn't hurt his average too much. After hitting .315 in a few starts he and Maury Wills were sent by Montreal to LA for Ron Fairly and Paul Popovich. That deal would work out pretty well for both sides as Fairly got more playing time in Montreal and Wills put in a last couple of good seasons as shortstop. Manny really took to his new home, hitting .323 the rest of the way. He was rewarded the following year by getting the most playing time of his career. But it was a tough season in one way for Manny: a foul line drive off his bat killed a young spectator. After a '71 in which Dick Allen and some new kids took away from his playing time a bit he returned in '72 to post probably his best season as a regular. Manny, who when platooned generally hit against lefties, actually hit about 100 points higher against righties that season. In '74 Walt Alston moved him to be his main pinch-hitting specialist and statistically Manny didn't flinch. Over the next seven seasons he hit .310 in his new role. His best season was probably '77 when in 50 plate appearances he had zero strikeouts, hit .395, and had a .521 OBA. In '79 he broke the career pinch-hitting hit record with his 145th hit. He finished with 150 and held the record for almost 30 years. After retiring following the '79 season in '80 he was activated for a few games and then for one at bat in '82. Manny finished with a .304 average with a .355 OBA. He only struck out once every twelve at bats. In the post-season he hit .375 with a .444 OBA in ten games.

While he was playing stateside Mota also played winter ball in the DR, compiling a lifetime average well above .300. After he retired he coached down there and continued his foundation work as well as some local tv work. He also moved that act up north where he remained - and still remains - with LA doing some hitting coaching and Spanish-language broadcasting as well as a bunch of local community work for the Dodgers. 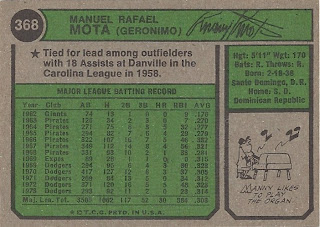 Manny gets one star bullet and Topps gets creative, giving a guy noted for his hitting some props for his defense. He has a great parenthetic name going here.

So this has been the lamest posting stretch for this blog thus far. Sorry about that but work has been a bear. I still have to catch up on music and that Watergate thing I started months ago. One thing at a time. Let's get to the rest of April '74 music news. Thankfully there's not too much. On April 20 the new Number One in the States was a bunch of initials : "TSOP" by MFSB. Those stood for "The Sound of Philadelphia" by Mother Father Sister Brother. The song was an instrumental conjured up by the Gamble-Huff guys - who back then sort of turned Philly into their own version of Motown - and featured occasional chimes by The Three Degrees, their former all-female backing group who would have their own hit later that year.

It's been so long between posts I had to look up to whom Manny's link goes. Two short-named old guys. Their longevity should help: