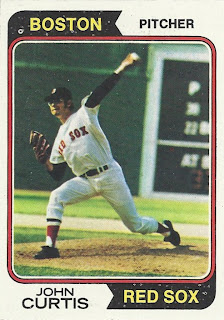 We move from a Cardinal to a soon-to-be Cardinal for this next post. John Curtis gets another great action shot that I believe shows off his curve. But what really makes this shot is that I am pretty sure it is the first one in the set with a backdrop of an iconic left field wall, in this case, Boston’s Green Monster. There will be another famous backdrop coming up in a few posts. If we saw a little more of the scoreboard here we might even be able to pinpoint the game. In many ways, ’73 was John’s best season: he scored his most innings and wins of his career, as well as starts (30), and complete games (10). As for his Traded card, I have one word: shampoo! That slick-back on his head looks nasty. But those glasses are all-Seventies. I can’t nail down the location of this photo or of the guy behind him. The sideburns make me want to say Doug Griffin, but that’s just a guess.

John Curtis was actually born not terribly far from Boston, in Newtown, Massachusetts, and then moved to upstate NY while a kid. After graduating from high school in ’66, where he had an excellent record as a pitcher, he was drafted in the first round by Cleveland. John instead opted to go to Clemson where his freshman year he threw three no-hitters and the following summer was the first US pitcher to beat Cuba in the Pan-Am Games. He returned for his sophomore season and was then drafted – again in the first round – by the Red Sox and this time signed. He spent the rest of the summer in A ball where he turned in a pretty good season. After a step back at the same level in ’69 he moved up a notch in ’70 and put together a good enough season to get a look in Boston that summer. He then spent most of ’71 and part of the next year in Triple A where he continued averaging nearly a strikeout an inning. In ’71 he had a much more successful short run for the BoSox and in ’72 he moved up for good. 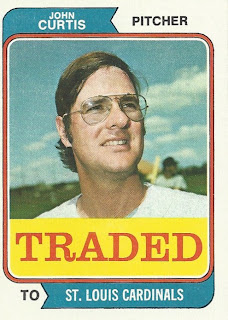 Curtis stepped into the rotation upon being called up in ’72 and did pretty well, especially for a lefty in Fenway. After this trade he moved to St. Louis, a team desperately in need of a left-hander. John wouldn’t be their salvation, however, as the team was mired in mediocrity those years and he wasn’t helping much as a few too many hits and flat-lined strikeouts vs. walks stats pulled his three-year record to 24-34 with a 3.88 ERA. His last two seasons there he was spending as much time in the pen as in the rotation. Right after the ’76 season he was part of another big trade, moving to San Francisco with Willie Crawford and Vic Harris for Mike Caldwell, John D’Acquisto, and Dave Rader. ’77 was not so hot – 3-3 with an ERA over 5.00 in 43 games, but ’78 was much better and in ’79, despite a relatively high ERA, he was one of the team’s most consistent winners, going 10-9 with a 4.18 ERA in 18 starts, his most since ’75. He then hit the road again, moving down to San Diego as a free agent. His first season there he pretty much matched his ’79 numbers, though he pulled his ERA down over half a run. Then in ’81 a crappy start to the season returned him to the pen as he finished 2-6 with a 5.13 ERA. He improved substantially in ’82, going 8-6 with a 4.18 ERA. That August he was sold to California for its stretch run – he got shut out of the post-season – and he finished out his career there the next two seasons. John put up a record of 89-97 with a 3.96 ERA, 42 complete games, 14 shutouts, and eleven saves.

While Curtis was still in the minors he returned to Clemson in the off-seasons and finished up his degree in history in ’71, pretty quick for a part-timer. That year he also took an off-season gig writing sports for a local paper. When he finished playing he took the writing gig on as his new profession, bylining stories for a bunch of papers, including the San Francisco Chronicle, as well as SI. Then in 2000 he also returned to baseball via coaching, getting pitching coach work for the independent Long Beach Breakers (2000-’02), before moving to the Milwaukee system (’03-’08), and then Oakland’s (’09 on). He is currently pitching coach for the A’s Huntsville franchise. 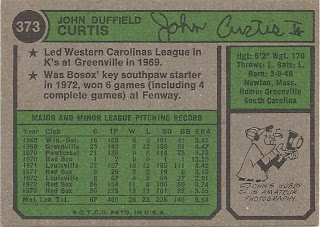 Those strikeout totals were the outstanding feature of John's '69 which in pretty much every other way was not a great season for him. Topps' second star bullet requires some digging as to what they meant by "key." In '72 outside of John, the Sox had four lefty pitchers on staff: Bill Lee, Gary Peters, Bob Veale, and Rogelio Moret. Lee won three at Fenway and Peters and Veale one each. So, yeah, six wins could be considered key, especially since they nearly won the division that year. 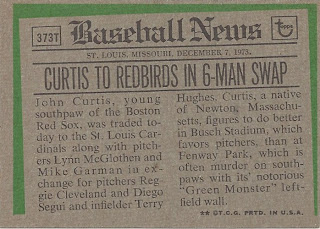 Look at Topps throw around the colloquialisms with "southpaw" and "murder." Outside of that it's a pretty blase card back. Unfortunately for John, the prediction regarding his future in St. Louis was a bit too optimistic.

This one’s easy since as noted above these guys played together: