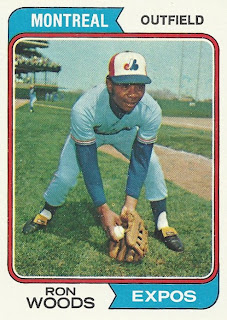 Back in the NL we get Ron Woods’ final card at Shea. Ron seems a bit confused as to what to do with that ball which may help explain his soon-to-be departure from the majors. But Ron was actually a pretty good fielder. Ironically, too, ’73 was his biggest season in terms of at bats and a bunch of other offensive numbers as his platooning partner in center, Boots Day, was hurt part of the year. Over a month into the season Ron was leading the NL in hitting with a .429 average. It’s been tough to get information on this guy. Most items pulled by search engines get you info on Ron Wood, the Stones guitarist. If you look up his Detroit days you get – you guessed it – Tiger Woods info. So if Ron wanted to go underground after he played he sure had the right name to do it.

Ron Woods was born in Ohio and at some point relocated to the LA area since he also played for Chet Brewer’s teams and played high school ball against future teammate Roy White. Ron was signed by the Pirates upon graduating in ’61 and then began a long minor league odyssey to the majors that took up most of the rest of the decade. After showing some good power his first two years in D ball – a combined 35 homers and 129 RBI’s in 590 at bats – he spent the next four seasons bouncing back and forth between A and Double A ball. That last year – ’66 – he was traded to the Tigers and for them he improved his numbers enough to step up his advancement. In ’67 he hit .296 with ten homers in Double A and in ’68 he batted .292 and hit 16 out in Triple A. In ’69 he was brought up to Detroit to be a defensive back-up in the outfield.

In 1969 the defending Series champ Tigers were pretty set in the outfield with Jim Northrup, Willie Horton, and Al Kaline. Woods got into a couple games when Horton had a fit and quit the team for a couple games. After only 15 at bats through mid-June Ron was traded to the Yankees for ex-icon Tom Tresh. NY had a lot more holes to fill so Ron spent a bit more time in center the rest of the way but only hit .175. In ’70 he played winter ball in Puerto Rico to work on his hitting. That move ended up being as good for him as it was for Boston pitcher Bill Lee since Ron pretty much saved Lee from getting destroyed by Ellie Rodriguez after Lee hit the catcher in a game. Ron returned to NY, this time splitting right field time with Curt Blefary since Bobby Murcer had taken over center. Ron’s numbers improved a bunch but that .227 average was still pretty light. After a few games to start the ’71 season he was traded to the Expos for old NY favorite Ron Swoboda.

Woods had a nice run his first year in Montreal, hitting .297 with a .382 OBA as he got some time in both right and center. In ’72 he and Boots Day became the platooned center fielder for the next two seasons. That year Ron had the biggest day of his career as he hit two homers with six RBI’s in a game. After peaking out playing-wise in ’73 he and Day saw significant contractions in playing time in ’74 due to the acquisition of Willie Davis. In January ’75 his contract was sold to the Chunichi Dragons of Japan for whom he would play for two seasons. His first year there he hit 16 homers with 45 RBI's, 69 runs, and a .263 average and towards the end of the season he was among a group of four players attacked by some rabid fans in Hiroshima. Pretty dramatic stuff so I wish I could have obtained some more color. In ’76 he matched his average but then departed the team midway through what seems to have been his final year as a player. In the States he hit a lifetime .233 with 26 homers and 130 RBI’s. He added about 100 points to his OBA as he had more walks than strikeouts. In the minors he hit .276 with over 130 stolen bases.

At some point after he played, Woods opened a photography studio back in Thousand Oaks, California, which he was doing in the late Seventies. I have gone hitless in trying to find what Ron has done since. 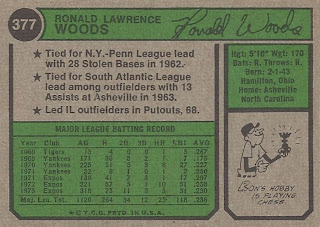 Ron had some speed early in his career both on the basepaths and in the outfield which gets noted in the star bullets. No hints here either to what he'd do after baseball.

We get lucky on this hookup with a former Rookie of the Year: