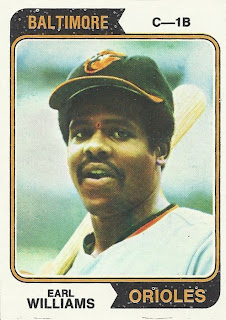 Returning to the action shots we get Earl Williams about to hit somewhere in an AL park. On this card at least Earl appears to have converted to Hinduism. He probably could have used it as his recent trade to Baltimore wasn’t going too well. He was still hitting for power, as his homer and RBI totals would attest. But his average dropped over 20 points, he spent some time on the DL, and he and the other Earl of Baltimore were having a testy time. Plus that other guy, manager Earl Weaver, made a bold prediction that when the O’s got this Earl it guaranteed them the pennant. Not exactly; the A’s juggernaut prevented that from happening. Plus, Baltimore gave up an awful lot to get this guy. Pat Dobson didn’t have a great run in Atlanta but he came back to the AL and won nine in half a season. Johnny Oates became starting catcher for the Braves. And assumed broken-down second baseman Davey Johnson set a record with his 43 homers. Oof. That’s a lot to live down. And Earl was no wallflower, preferring the Dick Allen method of conflict resolution over the Gandhi kind. So when the other Baltimore catchers and then the fans jumped behind Weaver to let Williams know how they felt he was right back at them. And all because the Braves turned him into a damn catcher.

Earl Williams was a three-sport star in Montclair, NJ. His senior year he averaged 20 per game in hoops and got a scholarship to Ithaca College when he graduated in ’65. He was also a pretty good pitcher who could throw heat so when the Braves trumped the school with an offer that included a bonus, Earl opted for baseball. Pretty much at least. He did go to school first where his contract prevented him from playing. The next summer he both pitched – 1-0 with a 3.10 ERA in eleven games – and played first base in a short season. In ’67 he dropped pitching in A ball and split time between the outfield and first. Then in ’68 he missed a bunch of time with an injured knee as he split time with a couple Single A teams. He finally got things going in A ball in ’69 with big homer and RBI totals and a .340 average. Those couple years he was still primarily a first baseman. Then in ’70 the club decided to take advantage of his arm and split him between first and third in both Double A – where he hit 21 doubles, 19 homers, and had 63 RBI’s in about half a season – and for a short stint in Triple A. He also got into a few games up top where he hit and fielded well at the corners. In ’71 he was slated to return to Triple A but a hot spring training made him a big-leaguer instead.

1971 was a tough year for the Braves. Orlando Cepeda’s knees finally gave out and he only got in a little under half a season at first. Batting champ Rico Carty missed the whole season on the DL. Clete Boyer was in a contract dispute and was running out of gas anyway at third base. So they were facing a wicked set of circumstances in shooting for their second NL West title in three years. The chaos worked out pretty well for Williams though. His season began at third base while the intended new guy there, Darrell Evans, got a little more seasoning. When Cepeda went down he also put in some time at first. But the Braves true need was behind the plate. ’69 rookie all-star Bob Didier had since faded to mediocrity and neither he nor Hal King could hit a lick. So the Braves threw Earl back there. He wasn’t real pleased but being the excellent athlete he was he did a pretty good job, winning pundits from even Phil Niekro, a tough boy to catch. Plus Earl was slugging up a storm and at the end of the year his 33 homers and 87 RBI’s would allow him to pass early-season favorite Willie Montanez for NL Rookie of the Year. In ’72 he pretty much matched his offensive numbers in more plate appearances but he had a tougher time catching as he led the NL in passed balls with 28 – he was catching Niekro – and helped give up 78 steals. He also let it be known he wasn’t crazy happy playing behind the plate. So when Baltimore was shopping for some power, Atlanta was listening. Earl went to the O’s with heralded minor leaguer Taylor Duncan for Pat Dobson, Roric Harrison, Johnny Oates, and Davey Johnson.

’73 wouldn’t be all bad for Williams in his new home. A lack of knucklers on the O staff reduced his passed balls to four and he threw out nearly as many guys as he allowed to steal. With Boog Powell’s decline he also got in a considerable amount of time at first. Plus he was a significant uptick offensively to anyone else the Orioles had behind the plate. He also had a pretty good playoff against Oakland, hitting .278 with a homer and four RBI’s in the five games. And Baltimore did win the division his two seasons there. But ’74 was an even tougher season as his RBI numbers declined to 54 and his homers to 14 even though he picked up his average a few points. And he went o-fer in the playoffs. Plus he was now getting racially-tinged hate mail on a regular basis. So when Baltimore returned Earl to Atlanta for pitcher Jimmy Freeman, he wasn’t too displeased. But it wasn’t ’71 any more. Though playing a bunch more at first than catcher, Earl didn’t come close to matching his power output in ’75 – 11 homers and 50 RBI’s in 383 at bats – nor in ’76. So when he kicked off that second season hitting only .212 he was sold mid-year to the Expos. For Montreal he continued his double position thing and raised his average 25 points the rest of the season. But with Gary Carter solidifying himself behind the plate and free agent acquisition Tony Perez taking over at first, Earl was released in ’77 spring training. He was shortly thereafter picked up by car wreck Oakland for whom he hit 13 homers in 348 at bats as a catcher/DH and also stole the only two bases of his career. But he also had only 38 RBI’s and hit .241 and in spring training of ’78 he was released. Later that spring Earl actually put an ad in the New York Times soliciting his services – I have linked to an article regarding that here – but got no takers. So in ’79 he went down to Mexico and that year hit .343 with 20 homers and 112 RBI’s for Durango. In ’80 he moved to Campeche but his stats were nowhere near as good and by mid-season he was done. In ’81 he was offered a minor-league contract by Pittsburgh but declined. That ended his time in baseball. Earl finished with a .247 average with 148 homers and 457 RBI’s. In the post-season he hit .208 with a homer and four ribbies in seven games.

When Williams finished he returned home to Montclair and shortly thereafter relocated to Somerset, NJ, where he spent the next twenty years as a warehouse operations manager. As of the above article from 2011 he has been retired. 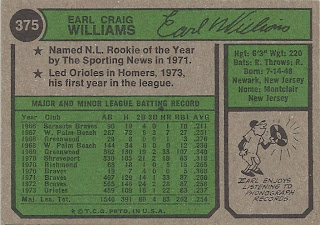 Most of this stuff Topps offers is is old hat in the star bullets. Earl could be a streaky hitter. In his big '69 season he had eight homers in seven days, two of them grand slams. In his brief '76 stay with Montreal he had a span of six homers in 24 at bats. There's that phonograph record thing again.

We have one bit of music news from 1973. On this date Mike Oldfield, a 20-year old wunderkind from the UK, released his album “Tubular Bells” on which he performed all the instrumentation. It’s single, of the same name, was a pretty big hit in both the UK and the US, mostly because it was used as the theme song to the big-selling summer freak show movie “The Exorcist.”

Earl gives us another break since he and Marty were teammates: