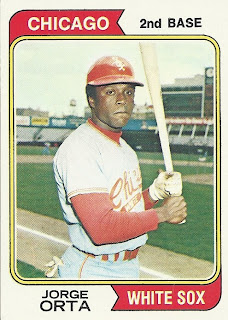 The action shots are over for a couple cards as we return to Yankee Stadium for a shot of Jorge Orta who seems to be borrowing Bob Watson’s glum look from a few posts ago. Jorge became a regular for the White Sox in ’73, in the process boosting his average over 60 points. Jorge was never much of a fielder but with Mike Andrews having run out of gas a bit earlier than expected he did fill a big potential hole at second, questionable defense or not. So like Mr. Watson he should also be pretty happy but he obviously isn’t. Maybe Topps wouldn’t let him put on both his batting gloves.

Jorge Orta’s dad played pro ball in Cuba. By the time Jorge was around his dad had relocated to Mexico – nice timing – and was on the road a bunch as a coach. Jorge was frequently with him so there was a bunch of transition in his teen years and his main outlets were pick-up games of hoops, which he also played in high school.  When he graduated he opted to give baseball a shot. He made the Fresnillo team but after a few games there decided to return to his dad who was now running his own restaurant. He spent the next year-plus under his father’s tutelage and returned at the tail end of the ’70 season to post a pretty good average. The next year he exploded with his .423 in the summer league and then finished with a .362 in the fall league. He was then recommended to new White Sox player personnel director Roland Hemond who flew down to watch Jorge deliver his Mexicali team the league championship and signed him on the spot. Jorge – after his wrist was healed following his falling through a window celebrating the championship – was brought up to Florida late that fall for some instructional league play. He then hit a ton in ’72 spring training and made the Sox. Early that season he split time between second and shortstop but after hitting an anemic .202 was sent to Double A Knoxville. There he revived his stroke and after again smashing the ball at a good clip in ’73 spring training he was up for good.

In ’74 Orta continued his upward climb in hitting, posting a .316 average with 67 RBI’s and a .365 OBA. In ‘75 he hit .304 and was named an All-Star, but was replaced due to a pulled hamstring. In ’76 the Sox acquired Jack Brohamer and Jorge got itinerant, spending most of his time at third and in the outfield. He had a tough time error-wise at both spots but did finish high among AL outfielders in assists. His average contracted 30 points but he also had by far his best stolen base season with 24 thefts. In ’77 the Sox got free agent Eric Soderholm to play third and Jorge returned to second where he upped his average to .282 and his RBI total to his career best of 84. Then in ’78 Jorge’s offense sputtered a bit and he missed some time as his nagging hamstring issues became more chronic. That peaked in ’79 as he missed some time and played more DH than second. After the season he opted for free agency and signed with the Indians.

The Indians of ’80 had a bit of an offensive revival, led by first-year wonder Joe Charboneau, and Orta moved into right field to be a part of it. His average upticked to .291 and he got his second All-Star nod even though he spent a couple weeks on the DL. Then in ’81 he led AL outfielders with eleven assists but the offensive numbers went south as he missed more time. After that season he was traded to LA in the deal that brought Cleveland Rick Sutcliffe. Good trade for the Indians as Jorge’s season for the Dodgers was a mess even though he had another excellent spring. He hit only .217 with eight RBI’s in 115 at bats as a right fielder/pinch hitter. After the season he was shipped to the Mets for Pat Zachry. But the Mets were pretty loaded with lefty-hitting outfielders so a month later they sent Jorge to Toronto. Back in the AL he did much better, raising his average 20 points in twice as many at bats, while also raising his homer and RBI totals almost five-fold. Then he went to the Royals for Willie Mays Aikens, problem-child. Jorge was by now chiefly a DH and in KC he hit nearly .300 in his new home splitting time with Hal McRae. That year he got his first taste of playoff action. In ’85 and ’86 he continued platooning with McRae, the former year becoming part of a Series champ. Jorge earned a kind of immortality when in a game against St. Louis he was called safe in a play in which it was later revealed he was clearly out. KC was down 1-0 in the game – the play happened in the ninth – and 3-2 in the Series. They ended up winning the game 2-1 and the Series the next night so the play was a big deal. Jorge would play a partial season with the club in ’87 before he was released mid-year, finishing his career. He ended with a .278 average with a .334 OBA, 130 homers, and 745 RBI’s. In the post-season he hit .111 in eight games with an RBI.

There are indications out there that Orta got into coaching in the Houston system immediately after playing, however specific documentation of anything is pretty sparse until the mid-90’s or so. He did continue to play off-season ball in Mexico for a bit and in ’94 played for a season in Italy. Then for sure he coached in the Houston chain from ’97 to 2005, including three seasons as a manager at the Class A level (2001-’03) during which he went 116-84. In ’06 he moved to the Cincinnati chain where he has been a hitting coach at a few levels, including a roving one for two years. 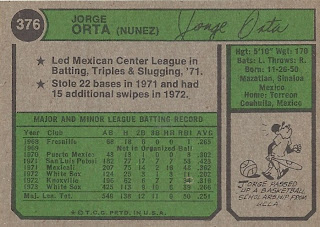 That really was a monster season in the first half of ’71 although back then the Mexican Leagues were considered about a half step below Single A ball. Those two stolen base totals were in the minors as well. The cartoon is a bit tricky: in a newspaper interview his rookie year Jorge noted that a hoops scout from UCLA saw him play in Mexico and told him to come check out the school, but I have found nothing substantive indicating he was ever actually offered a scholarship. At 5’10” he must have been a hell of a point guard.

On May 26, 1974 David Cassidy of the Partridge Family is performing at White City in London. Back then Cassidy was that time’s version of Justin Bieber and the concert was attended by thousands of adolescent girl fans. Over 1,000 will get medical care at the stadium, six will be hospitalized, and one will pass away from heart failure. The grim event pretty much marks the peak of Cassidy’s singing career.

We use a couple of stylish AL guys for the hookup: