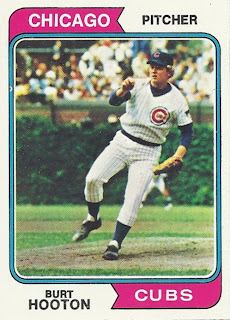 Now this is a great action shot, and for a couple reasons. First off, its the second action shot in the last six posts of an iconic field, and even if you’re not a Cubs fan you gotta love those ivy-covered Wrigley Walls. Second, check out the subject, Burt Hooton. He has just released a pitch but it looks like he could be hailing a cab. That’s the beauty of throwing the knuckler and its derivative curve; it’s not too physically demanding. Third, Burt looks pissed. He always looked pissed which is how he picked up his “Happy” nickname. And last, there is a guy playing in the outfield behind Mr. Hooton. Who is it? It’s a right-hander for sure. So it ain’t Rick Monday or Gene Hiser. And it’s not Jose Cardenal because he played exclusively in right. Billy Williams batted left but he was a left fielder and he threw righty. Rick Reuschel’s card is also an action shot and I’m betting Topps didn’t make too many trips to Wrigley that summer. If I am correct and the photos are from the same game, then that game was most likely played on August 15 when both pitchers hit the mound in a 15-1 blowout by the Braves (that would also explain the pained look on Burt’s face). Rico Carty was the left fielder that whole game so that is probably our boy in the outfield which is nice since Rico was shut-out card-wise in this set.

But back to our subject, Hooton had a pretty good ’73 with the Cubbies, despite some time in the pen and an ERA that rose a bunch from the prior season. He tied with Reuschel and Fergie Jenkins for most wins on the team, but none of them had a winning record. It would be his last good season in Chicago as things went downhill for him pretty fast beginning in ’74. But better things awaited him on the left coast.

Burt Hooton grew up in Texas where he taught himself a knuckle-curve pitch when he was 14. He threw four no-hitters in high school and then two more at the University of Texas where he was an All-American his three varsity seasons and compiled a 35-3 record with 13 shutouts and a 1.14 ERA. He’d been drafted by the Mets in ’68 but opted for college and then was drafted by the Cubs in the first round upon graduating Texas in ’71. Nine days later he made his first appearance in Chicago. In his second game he struck out 15 Mets. In his third he threw a shutout. Chicago then optioned him down to Triple A – to work on his pitching (?!) – and he blew people away there too with 135 strikeouts and only 19 walks in 102 innings. Needless to say in ’72 he came up for good.

Hooton continued his hot career kick-off in ’72, throwing a no-hitter in his first start that year. He had an awfully good rookie year but the days of averaging over a strikeout an inning were over and despite his 2.81 ERA he put up a losing record. Same deal in ’73. Then in ’74 he got off to a poor start and spent more time in the pen than the rotation and went 7-11 with a 4.80 ERA and a save. In ’75 he bottomed out in Chicago, going 0-2 with an 8.18 ERA in his first three starts. He also upstaged manager Whitey Lockman in a game so when the Cubbies had a chance to trade him to the Dodgers, they went for it. Burt went to the Dodgers for pitchers Eddie Solomon and Geoff Zahn.

Too bad for the Cubs. While Zahn and Solomon went a combined 2-7 the rest of the way, Hooton revived big to go 18-7 with a 2.82 ERA and four shutouts in his new home. In ’76 he took a step back, posted a nice ERA, but had a losing record. In ’77 he recovered his winning ways, going 12-7 with a 2.62 ERA. His first playoff game that fall was a mess, though, as he walked four guys in a row in his only start and couldn’t get out of the second inning. But he had a pretty good Series against NY, going 1-1 with a 3.75 ERA. Then came his big ’78: 19-10 with a 2.71 ERA and second place in the NL Cy race. After a crappy post-season run he put up some pretty good seasons the next few years, going a combined 25-18 in ’79 and ’80 and 11-6 with a 2.28 ERA in strike-shortened ’81, making his first All-Star team. That year he finally had a consistently good playoff run with a 4-1 record in five starts with an ERA of below 1.00 as LA won the whole thing. Burt got the NLCS MVP award. Then in ’82 he was having a not-great start to his season when a bone spur was discovered in his knee, the same one that had been operated on when he was a kid. It required an operation that didn’t quite take and despite flashes of his old self the next three seasons in LA were pretty tough. Burt went a combined 16-21 from '82 to ’84 and spent the last one in the pen. In ’85 he signed as a free agent with Texas and though he got off to a 2-1 start in the rotation soon fell prey to his old injury and was released after the season. In his career Burt went 151-136 with a 3.38 ERA, 86 complete games, 29 shutouts, and seven saves. In the post-season he was 6-3 with a 3.17 ERA in eleven games, all starts. He continues to rank pretty high in Dodgers career pitching stats; his record in LA was 112-84 with a 3.14 ERA and 22 shutouts.

After a couple seasons off Hooton returned to baseball in ’88 as a pitching coach in the Dodger system which he did through ’95. From ’96 to ’99 he did the same thing at his alma mater, the University of Texas. He then took on the pitching coach gig for Nolan Ryan’s Round Rock minor league team in 2000 but halfway through the season was promoted to Houston where he was the coach through ’04. In ’05 he returned to Round Rock and he is still the pitching coach for the franchise which in 2011 moved to Oklahoma City. 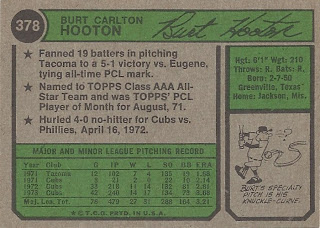 Lots of nice stuff happened to Burt when he opened his career and Topps gets most of it in the star bullets. Besides the knuckler, Burt also had a fastball, straight curve, and a change-up.

Mostly pitchers on this hook-up: