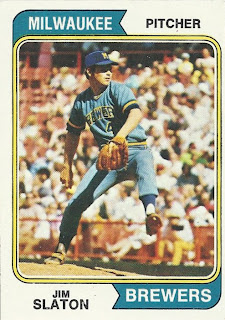 This card begins a pretty good run of action shots and this one is as good as any of the ones coming up. Jim Slaton appears to be about to launch a curveball at Arlington, judging by his grip and the red railings behind him. If I am correct about the site then that turnout is pretty impressive; probably a David Clyde game. In fact, Jim did start against Dave in Texas on July 17, a Tuesday day game, which he won 6-3, so this is probably a photo from that game. Jim had a pretty nice bounce in '73 from his sophomore jinx season the prior year. He was able to get his strikeouts to top his walks for his first time up top and his 13 wins were second on the staff to twenty-game winner Jim Colborn. This Jim will always be immortalized for me from his '76 season. He and Bill Travers had a nice run in an otherwise forgettable year for the Brewers. To capitalize on it, someone came up with a knockoff of the old Braves refrain: "Spahn and Sain and two days of rain." "Travers and Slaton and two days of waitin'" may not have had the same ring but I still remember it almost 40 years later so it had something going for it.

Jim Slaton is yet another California kid who made good in baseball. Jim called Antelope Valley - an area about 60 miles north of LA - home and after high school attended a junior college with the same name. After a year of juco ball he was drafted by the Pilots in '69. Too good for Rookie ball - one hit and 16 strikeouts in eight innings - he turned in a nice short season in A ball that summer. In '70 at the same level he was going great guns until called into the military that spring. He returned a year later, got bumped to Double A for a few games and then found himself in Milwaukee, pulled up by his excellent minor stats and a serious dearth in starting pitching up top. Despite throwing more walks than K's Jim had a pretty good rookie year, tossing four shutouts to be part of the team's league-leading 14. Then came his horrible run to kick off '72 and he was back in Double A where he had an excellent revival. He returned to Milwaukee for good late that season.

After a '74 pretty identical to his '73 Slaton fell apart a bit in '75, going 10-18 with a spike in his ERA. In '76 he went 14-15 with a 3.44 ERA - Travers was 15-16 - and together the big two won almost half the Brewers' games. The next season he had a nice start - 7-4 with an ERA well under 3.00 - and made the All-Star team. But after going 3-10 with a fat ERA the rest of the way Jim was sent to Detroit with Rich Folkers for Ben Oglivie. That trade worked out pretty well for Milwaukee since they got another power-hitting outfielder for a couple guys that won ten games between them the prior year. It worked out even better the following year when in '79 Slaton returned to the Brewers as a free agent after winning his personal best 17 in his short stint with the Tigers. He then posted probably his best season, going 15-9 with a 3.63 ERA, and seemed to be peaking career-wise just when his team was getting good.

Then Slaton hit the wall, the same one recent post subjects Larry Hisle and Steve Busby did. In Jim's third start of the '80 season against Toronto he tore his rotator cuff, ending his year. He returned in mid-'81 to the rotation and went 5-7 the rest of the way. Then in '82 and '83 he moved to the pen as a long guy and sometime closer. He did pretty well in that role, going a combined 24-12 with eleven saves those two seasons. He also put out some nice post-season numbers that first year. After the '83 season he went to California for Bobby Clark where he rejoined the rotation. But like his former team his stats went south - a combined 17-26 with a 4.87 ERA in almost three seasons. In the second half of '86 he returned to Detroit to get a couple saves out of the pen. That was it for Jim. He went 151-158 with a 4.03 ERA with 22 shutouts, 14 saves, and 86 complete games. In the post-season he went 1-0 with a 2.03 ERA and a save in eight games.

Slaton returned to baseball shortly after his playing career ended. He played a bit in the Senior League before it folded and then became a coach beginning in '92. He began with the Oakland organization ('92-'94), and then moved to the Cubs chain ('95-'96), and then Seattle's ('97-2007) where he spent the last three seasons up top as bullpen coach. In '08 he moved to the Los Angeles chain where he has coached in the minors and subbed up top when pitching coach Howell has been laid low by diabetes. He is currently the pitching and rehab coach at the club's Canyon Ranch minor league facility. 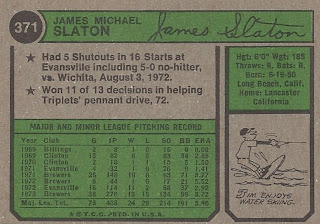 When Jim returned to the minors after his poor start up top in '72 he did a nice job of turning things around which Topps notes in his star bullets.

I would not have expected this hook-up but here we go: