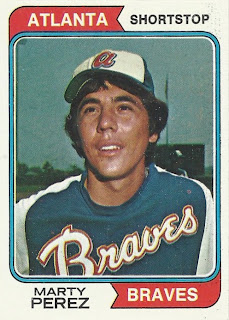 Marty Perez breaks the action shot streak – it returns next post – but looking at that sky behind him it looks like Marty’s going to be running for cover any second. It’s probably just a bad filter but that Shea skyline does look nasty. Marty came into his own a bit offensively in ’73, but his most important moment influence-wise would have been when he lined a shot up the middle against Jon Matlack that cracked the pitcher in the skull and nearly ended his life, if not his season. Pretty scary stuff. So if this is that game at which Marty is smiling, no wonder those Shea gods were angry.

Marty Perez was a baseball star at Redwood High in Visalia from where he was signed by the Angels in ’64. That summer he hit .273 in Rookie ball. After a strong start at that level in ’65 he moved to a couple A teams where his average took a dive. He remained in A ball in ’66 and then hit .289 there in ’67. In ’68 he hit pretty well in Double A and then the next two seasons staked out Triple A Hawaii where he hovered around .280. Both years he got some short looks up top but with Jim Fregosi putting together his best summers those seasons, there wasn’t any real room for Marty. After the ’70 season – ironically right before Fregosi sort of fell apart – Marty was sent to the Braves for catcher John Burns.

Things weren’t too rosy for Atlanta at shortstop in ’70. Sonny Jackson just wasn’t much of a fielder and so in ’71 he was moved to the outfield and Perez was handed the gig. While Marty was high on the errors list and was benched for a bit so that Zoilo Versalles could show everyone he was done, he was definitely an improvement over the past. One area in which the Braves weren’t hurting was hitting so though Marty hit under .230 his first couple seasons, that was OK. When in ’73 he upped things to .250 with 57 RBI’s that was a bonus. And his eight homers were enough to make him part of the record-breaking infield total that year. He also put up his best assists total that year. In ’74 Davey Johnson got moved to first and Marty slid right behind him into second, which would be his predominant position from then on. Marty upped his average at his new position ten points and then in ’75 hit .275, his best for a season. In ’76 he split the early part of the season between second and short before being traded that June to San Francisco with Darrell Evans for Willie Montanez, Craig Robinson, Jake Brown, and Mike Eden.

In the second half of ’76 Perez did a pretty nice job replacing problem child Derrell Thomas at second, hitting .259 with more walks than strikeouts. But after the season the Giants, hungry for outfielders, sent Marty to the Yankees for Terry Whitfield. After a couple games in NY Marty was on the move again, this time to Oakland with Dock Ellis and Larry Murray for Mike Torrez. Marty took over second base pretty much the rest of the way for the depleted A’s, but with a much worse line-up around him his average fell to .231. In early ’78 he was released and then picked up by the Mets for another west coast/ east coast volley. The Mets sent him to Triple A Tidewater where he put in more time at third than anywhere else, hit .261, and fielded well enough. But for NY he wasn’t the answer and after the season he was released. Marty finished with a .246 average. He was pretty good at putting the ball in play, nabbing a strikeout about every nine at bats.

Perez pretty much made the Atlanta area his home base early in his career up top and has remained there since. He ran a baseball camp for a while with former teammate Adrian Devine and participates in local charity and Braves golfing tournaments. Since 1980 he has been in the insurance business and has had his own shop since ’92. 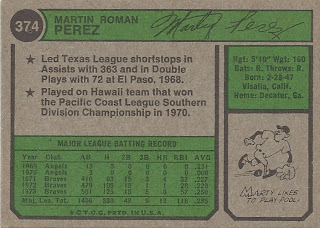 Marty gets star bullet attention for his defense in ’68 and his being a member of the ’70 PCL division champs. Who else was on that team? Doug Griffin – future BoSox second baseman – and Winston Llenas with his 108 RBI’s were the big offensive guns. Tom Bradley, another future Giant, and Dave LaRoche were among the pitching leaders. Pretty much everyone on the team’s roster did time up top. Plus they got to play in Hawaii.

So I missed a pretty big music item yesterday, more on the business side than on the talent one. Clive Davis, for years president of Columbia Records, gets canned on May 23, 1973. It seemed Clive was dipping into the company coffers to pay for things like his son's bar mitzvah and his apartment makeover so he was nabbed for tax evasion. But Clive would be back and within a few years he formed his own label, Arista Records. Probably the biggest talent he directed in his later years was Whitney Houston so he sure didn't lose his touch.

Marty and John missed each other by a year so let's fix that up: