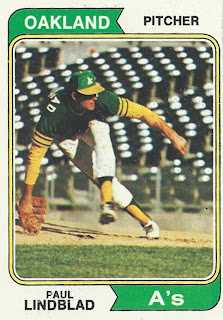 This is a great action shot. With the sun appearing to be directly overhead casting that odd light on the seats behind Paul here, I used to think they looked like typewriter keys. This is a big pitch for Lindblad and I do not remember him generally ending up in this position. By the '73 season he was nearly at the end of what was a roughly eight-year run without an error which would seem to validate my memory. '73 was not a great year statistically for Paul as he only finished less than a third of his games and got two saves. But he timed the back-and-forth of his team moves between Oakland and Washington/Texas pretty well and on his second go-around with the A's got three playoff years.

Paul Lindblad grew up in Chanute, Kansas where he was a multi-sport guy and then attended the local two-year school. Upon graduating he moved to the University of Kansas where he played a couple seasons of basketball and baseball - a teammate was future A's pitcher Chuck Dobson -  graduating in '63, and then again staying local by signing with the A's. The rest of that summer he went 10-2 with a 1.74 ERA in 14 starts in A ball. He followed that by going 11-8 with a 3.32 ERA in Double A in '64 and 12-11 with a 3.67 ERA in Triple A in '65. He debuted for KC that September and while he gave up a bunch of runs his first month he didn't walk anyone while striking out twelve in seven innings. He was up to stay.

While Lindblad would get a combined 24 starts his first two full seasons, his primary role was as a set-up guy and after a rough rookie year in '66 he settled into a nice run for the duration of his first round with KC/Oakland. His best years were '69 and '70 when he added nine and three saves, respectively, to his posted stats. After an equally good start to the '71 season in May he was sent to Washington with Frank Fernandez and Don Mincher for Mike Epstein and Darold Knowles. He then put up two very nice seasons for the Senators/Rangers, adding eight saves for them in '71 and nine during a '72 season in which he led the AL with 66 appearances. Those stats got Oakland turned on enough to bring him back - for Brent Alyea - and Paul again filled the gap for his old team. In '73 he got his first post-season action, winning a Series game in which he was the last pitcher to throw to Willie Mays. In '74 he picked up his regular season numbers significantly - 4-4 with a 2.06 ERA and six saves but got shut out in the post-season. Then in '75 he went 9-1 with a 2.72 ERA and seven saves in what may have been his best season. It was certainly one of his more eventful ones: on the last day of the season he, Vida Blue, Glenn Abbot, and Rollie Fingers combined to throw the first four-pitcher no-hitter.

After some playoff work in '75, Lindblad put in another good season in Oakland in '76, going 6-5 with a 3.06 ERA and five saves. He then returned to Texas in a sale. His numbers declined a bit in '77 and then after appearing in only 18 games through the end of July '78 he was sold to the Yankees for the stretch run. He actually started a game for NY during his couple months there and again experienced some post-season work - although not terribly successfully - and got his second ring. He was sold to the Mariners following the season but didn't make it out of spring training. That ended his career which finished at 68-63 with a 3.29 ERA with a complete game and 64 saves. A good athlete, he hit .195 during his career. In the post-season he was 1-0 with a 3.48 ERA in six games.

When he finished playing Lindblad remained in the Arlington area where he set up a business designing and installing custom homes. He also put in some time as a minor leage pitching coach, first in the Milwaukee system ('87-'90), and then Seattle's ('91-'92). He was working in the Padres system when he was diagnosed in '93 with early onset Alzheimer's Disease - he was only 52 - which set in rapidly and within a couple years required him to take residence full-time in an assisted-living facility. He passed away from the disease in 2006. He was 64. 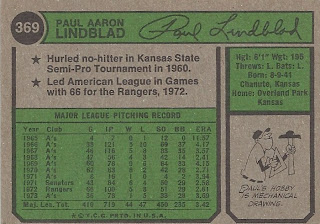 Paul gets some informational star bullets. He would have been only 16 in that semi-pro game in '60. Given his immediate career after baseball he likely put his hobby to good use. He wouldn't have faced his middle name name-sake until late in each one's career.

Returning to music in my attempt to catch up, let's get through the first half of May '73. No new Number One's - "Tie a Yellow Ribbon ..." had a stranglehold there - but some interesting stuff. On the first Washington D.C. had a "Marvin Gaye Day" which honored the singer who performed that night at The Kennedy Center. On the sixth Paul Simon began his first major tour without old buddy Art Garfunkle. And on the tenth another former member of a famous group, Paul McCartney, had a variety show in which he sang and danced at a pub in Liverpool.

Lindblad never faced Manny Mota since he didn't get any '74 Series work:

Jim Pagliaroni was a catcher during the Sixties who also played for the Red Sox and the Pilots in his final season. He had some pretty good years as the main guy in Pittsburgh in the middle of his career and gets a bunch of time as one of the more colorful guys in "Ball Four."