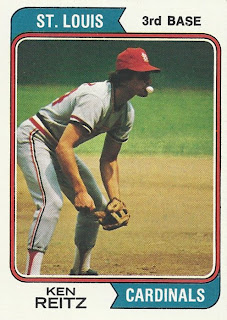 The second action shot in a row gives us Ken Reitz at third base, a position at which he excelled. Topps must have loved this shot since it has a player blowing a bubble-gum bubble. This is Ken's first solo card and in his first full regular season - I believe he spent too much time up top in '72 to be officially considered a rookie in '73 - he took over the third base gig from Joe Torre, a pretty tough act to follow. Ken's offensive season was nothing spectacular but he did lead the NL in fielding percentage at his position, a trick he would also pull in '74 and then every season from '77 to '81 (except '79 when he came in second). Ken was quick at the hot corner and would also regularly be among league leaders in assists. By contrast he was one of the slowest guys in the league, also regularly making the top ten in grounding into double plays. And he almost never walked. But Ken's lack of speed wouldn't be his undoing in baseball; rather it would be his fast-paced lifestyle.

Ken Reitz was drafted in a late round by the Cards in '69 upon graduating from Jefferson City High School in California where he played football and baseball. That summer his .324 average in Rookie ball in a few games got him pushed up fast to A ball. After spending another season in A ball in '70 he moved up a rung each season, reaching the top in late summer of '72. By the time he got to St. Louis he had what would be his career nickname: Zamboni.

In '74 Reitz ratcheted up his batting average 35 points and continued his fine fielding. In '75 he won a Gold Glove in what was ironically his worst fielding percentage season by far. Prior to the '76 season he went to the Giants for Pete Falcone for a year before he returned to St. Louis for Lynn McGlothen. By then Ken had ramped up his RBI totals to the mid-seventies and was back at the top in fielding. That year - '77 - he set a record for fewest errors in a season at third with nine. He also peaked power-wise with 17 homers and 79 RBI's. Unfortunately it was also around then that he acquired his amphetamine habit and while it was not yet impacting his performance on the field, it was getting him into some trouble off of it. In '79 during some downtime in an airport he crashed through a plate glass window while he and Keith Hernandez were throwing around a football. In '80 Ken broke his own record for fewest errors with eight in what was his only All-Star season. He also topped out his OBA with an even .300. But his RBI total dropped to 58, his lack of speed was becoming a liability, and he was becoming increasingly paranoid from his drug habit, at one point shooting out the back window of his car because he heard voices from his back seat. That December he and newbie Leon "Bull" Durham were sent to the Cubs for Bruce Sutter.

1981 was the split strike season and the Cubs didn't perform terribly well in either half. Reitz did well enough on defense but a bone chip in his elbow impacted his throwing and his average fell to .215. During spring training of '82 he was released and that May picked up by Pittsburgh. After getting some late-inning defensive work in a few games he was released a month later. He then returned to St. Louis where, among other things, he worked for a local cable company and threw batting practice at Busch Stadium. He also played slo-pitch softball which he was still at when the Cards signed him in July of  '83 to a minor-league contract as insurance for their Triple A pennant drive. But by then Ken's drug dependency was out of control and before the season was over he was in rehab, which kept him out of action baseball-wise until early in the '85 season. Then he signed a minor-league deal with Tulsa, now a Double A club in the Texas chain and for them hit .222 while playing both corners and some middle infield. In '86 he signed with the Class A San Jose Bees, an unaffiliated team under new ownership that specialized in being a last shot for ex-major leaguers who got in trouble (some of his teammates were Mike Norris, Derrell Thomas, and Steve Howe). Ken played two seasons for the Bees, '87 as a player-coach, and then hung them up. His final average up top was .260 with 68 homers and 548 RBI's. His .970 lifetime fielding average is sixth best.

After done playing Reitz turned to drug counseling and spent a bunch of years with the Franklin County Drug and Alcohol Center. He would also work his way back to baseball as a part-time scout and fielding instructor for several teams. Earlier this year he was given a job by former teammate Joe Torre helping to analyze games for MLB. He has also become an excellent scratch golfer and makes regular appearances at pro-am tournaments and Cards-sponsored tournaments. 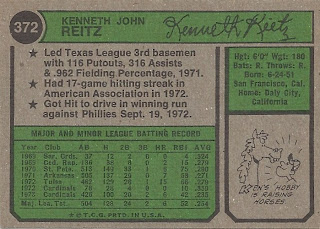 Ken is already getting props for his defensive work in his Topps star bullets. That hitting streak helped get him promoted upstairs where he continued his hot hitting late in the year. I have not read that he continued his hobby later in his career or after playing.

Time to catch up on some music news. On May 19 of '73 there were new Number One's in both the US and the UK. Stevie Wonder's upper "You Are The Sunshine Of My Life" takes over the top spot in a mellow move from his recent social commentary hits. In the UK the new topper was "See My Baby Jive" by Wizzard. A light rocker, this is another song that has to be seen - it is also on YouTube - to be truly appreciated. The lead singer is dolled up as a white version of George Clinton and plays the french horn and cello. That they never cracked the top then in the States is not a huge mystery.

Let's get these two Cali kids together: