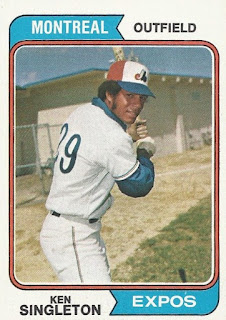 I was and am a big Ken Singleton fan. He seems like a nice guy and was a very talented outfielder, plus he came up with the Mets. But outside of his smile, his card here surpasses even the Bob Gallagher one as the nastiest one so far. This setting is actually kind of depressing. Where the hell was this taken? That building behind Ken has no ventilation, the fence looks like it's falling down, and I have seen more grass growing between sidewalk cracks. It is obviously an Expos property, since he has on the home uniform, but it can't be Jarry Park, can it? If you told me the Expos played spring ball in Camden, New Jersey, I wouldn't be surprised. It's a "5" card so you'd think they'd make it presentable. And Ken deserved an honor card for his big '73 season. In addition to his posted stats he scored 100 runs and led the NL with a .425 OBA, which back then was Morgan-esque. Ken was a big reason the Expos nearly won the division title before faltering in the last week. So an action shot would've been nice. Or at least something on a field that doesn't look like if you slid, you'd leave a pint of blood on the basepath. Poor guy.

Ken Singleton grew up in Mount Vernon, a stone's throw from the upper reaches of NYC. A big hoops guy and better baseball player, he went to Hofstra University after high school but got nabbed in the first round of the '67 draft by the Mets after one year there. That summer he'd hit .277 while playing first and the outfield in A ball but his big number was his .451 OBA, which would be a good indication of his future. For some reason he remained in A ball in '68, added some power and hit .284 with a .439 OBA. A .309/.428 season in Double A followed in '69 before in '70 a sick start to his Triple A season - .388/.531(!) - had Ken in NY that June. By then he'd pretty much dropped first base from his repertoire and was strictly an outfielder.

Singleton had a decent truncated rookie year, swapping time at the corner outfield spots after his call-up and posting generally good numbers. In '71 he was the most-played Met in right, taking over Ron Swoboda's spot after that guy was traded to Montreal, of all places. Manager Gil Hodges was a big believer in platooning his players, which is odd in Ken's case, since he was a switch-hitter. But he stepped his numbers up a bit and in his first two seasons posted a .369 OBA. Just prior to the '72 season Ken, Tim Foli, and Mike Jorgensen went to Montreal for Rusty Staub.

With the Expos Singleton took over left field his first season and while at first glance his offensive numbers seemed unextraordinary, they bear those of just about every other Montreal outfielder to date outside Staub, and that first year he led the team in runs, hits, and doubles. After seriously upping everything in '73, a year in which he moved to right field, he put up a .276/9/74 line in a '74 in which the Montreal offense did a bit of a retreat. At the end of that season the Expos assessed their team and decided the missing pieces were outfield speed - Ken did NOT steal bases - and a quality lefty rotation guy on the mound. So after that year he was traded to the Orioles in '75 in another big trade that was one of the most one-sided ever, with the Orioles getting Mike Torrez - who would win 20 games in '75 - with Ken for Dave McNally and Rich Coggins, neither of whom would finish the season there. And just like that the rising Expos went the other way pretty quickly.

Singleton began announcing a bit while still playing and immediately after he finished he turned to that full-time. He had a long run of calling games for Montreal from '85 to '96. When that run ended he hooked up with the MSG network to call Yankees games and then moved on to do the same thing for the YES network where he still resides professionally. He has called games for other networks as well and earned some local Emmy awards for his work. 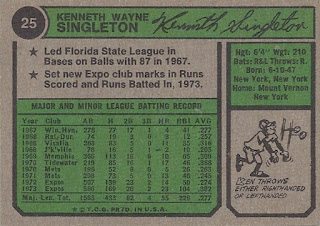 The back of the card brings up Singleton's ability to get on base and his nice '73 campaign. I suppose the cartoon could have just used the word "ambidextrous" but I guess Topps was afraid kids wouldn't know what that meant. I am pretty sure the first time I heard that word it was a baseball reference and I bet a lot of people have that same initial experience. Ken may have been pre-destined for a baseball career: the house in which he lived in Mount Vernon had been owned by Ralph Branca's family; and the field on which he played some club ball in high school was across the street from Yankee Stadium.

Lets hook Ken up to Mr. Hiller. This will be strictly an AL party: