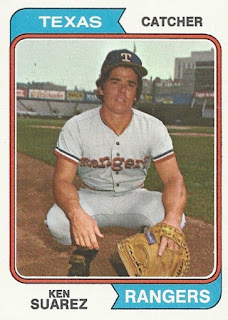 This is the last card for Ken Suarez. It is also the card following his biggest season by far, the only year he was a semi-regular. '73 was a transition year at catcher for the Rangers. They were moving from Dick Billings to Jim Sundberg, so Suarez got a lot of work. His offense really wasn't that bad as he only struck out once in about 20 plate appearances. And his normally excellent defense was present as he allowed only three passed balls and as usual put up pickoff stats that were a premium to the league average. Here he crouches at Yankee Stadium on a not terribly sunny day.

Ken Suarez was a Tampa kid who in summers in high school played on an American Legion team with Lou Piniella and Tony LaRussa. He then went to Florida State where after a seldom-used sophomore year he had a big junior season in '64. He is the second player from Florida State to appear on this blog although he graduated a few years earlier than Johnny Grubb. Signed early in '65 by Kansas City, Ken had a good half-season of A ball followed by a not great half-season in Double A. But he made the A's out of spring training in '66 and began the season as the starting guy behind the plate. After putting up no offense through May, though, he lost the gig to Phil Roof, got benched, and returned to Double A where he hit even worse.That year he also began his military hitch in earnest, which also took away from his playing time. In '67 he did a reverse of the prior year, starting off in Double A, where he hit .250, and then moving back up to KC, where he did a much better offensive job than the prior year, including a .388 OBA. After that season he went to Cleveland in that Rule 5 draft I mentioned a couple posts back.

Suarez remained in Cleveland for all of the '68 season but saw almost no action. He then spent about half the '69 season in Triple A before returning to the Tribe where he put up his best MLB average the rest of the way. But '70 was then a return to Double A where Ken posted a .301 average and a .381 OBA in his busiest year. '71 was again all Cleveland but Ken was unable to break through Mendoza levels offensively and after that season he went to the Rangers in a big trade that included nine guys, none except Del Unser who was terribly high-profile.

Suarez began his Ranger run in Triple A in '72, posting his best offensive run, including a .341 average and a .406 OBA. While he didn't show too much up top, he stuck around to split the starting duties in '73. After that season he asked for a raise, didn't get it, took the Rangers to arbitration, and was sent back to Cleveland for Leo Cardenas. Instead of playing, Ken sued the Rangers for getting rid of him because he took them to arbitration, which I guess was a big no-no. Late in the '74 season he was traded to California with Rusty Torres for Frank Robinson, but Ken was done playing by then. So his stats on the back are his final MLB ones. He hit .272 in the minors with a .400 OBA. He also picked off 45% of the guys that tried to run on him during his MLB time.

After playing Suarez settled in the Fort Worth area, where he worked in aviation, radio, and agriculture. I will say this for Ken: he had and has some head of hair judging by this photo here from 2003. 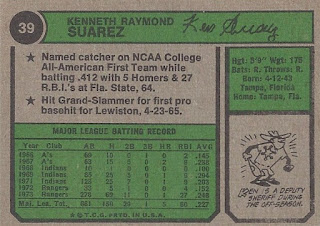 Another good star bullet for this guy was pretty recent: during the '73 season Ken broke up a Jim Palmer - coming up - perfect game with a ninth inning single. Ken was not a big guy, was he? At 5'9" and 175, he must have been a tough bird. That he was a sheriff in the off-season then is not too surprising, although I cannot find anything anywhere to verify that. Maybe when Shaq gets done playing they can hang out.

Suarez moved around a bit so this should be quick: