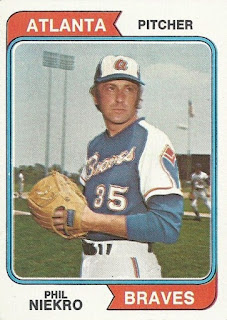 This is the second NLer in a row, a streak that will continue for a few cards, breaking the norm so far of alternating the leagues. We are back to the posed shots and this one has Phil Niekro at what appears to be Shea, evidenced by the New York guys in the background. Phil didn't get an honor card in '73 though he certainly could have. He put up pretty good numbers for a mediocre - at best - team. But his decisions were down because he had to put in some pen time due to the general ineffectiveness of the Atlanta relief corps. On top of a pretty good season, Phil had a special moment in '73, but I'll leave that to the card back commentary. Hard to believe that at the time of this photo Phil would be back in NY pitching for the Yankees over a decade into the future.

Phil Niekro is a Hall of Fame 300-game winner who got there on the strength of his knuckleball, which he and brother Joe learned from their dad, a coal miner who was also a semi-pro pitcher. Phil was signed in '58 by the Braves - only the second guy so far whose career began in the 50's - and would play for them the bulk of his long stay in the bigs. It took Phil a while to get to the majors - he was strictly a reliever while working from D to Triple A ball through '62 and then he lost '63 completely to military duty, a feature of players' careers much less prevalent now than in the '60's. In '64 he finally got rotation work at the higher level and went 11-5 with a 3.45 ERA to earn a late-season look and while his numbers weren't great, outside of a short visit to the minors in '66, Phil was up for good.

Niekro had a nice rookie year, again working from the pen, and earning six saves. A rough start got him back in Triple A mid-spring where he did spot duty and when he returned in August he pulled over a run off his MLB ERA. Then in '67 Phil was doing bang-up pen work - through early June he was 1-2 but with seven saves and a 1.74 ERA - so Atlanta got wise, put him in the rotation, and in his first start Phil threw a shutout. He would go on to win the ERA title that year and from then on would be - mostly - a starter. After a good '68 he would enjoy probably his best season in '69 and his 23 wins were a big reason Atlanta got to the playoffs that year. He then pitched OK in the post-season but the Mets pitchers were tough that year. Phil would go on to reach double figures in wins every year in Atlanta he started with the exception of '81, which was a strike year. '70 was a little tough due to an injury but '71 and '72 were very good and in '74 Phil won 20 as his wins, innings, and complete game (18) totals led the NL. In '75 and '76 as Atlanta got truly bad, Phil rose above with a combined 32-26 record with a 3.24 ERA. Then from '77 to '80 he led the league both in starts and in losses, but in two of those years he had winning records and in all of them had ERA's considerably better than league averages. During that time Phil was a big innings hog and from '77 to '79 he led the NL in innings, complete games, and batters faced. In '77 he even led the NL in strikeouts. A 7-7 season in '81 was followed by another playoff season in '82 in which he Phil went 17-4 and had the best winning percentage in the league. After a discounted season in '83 Atlanta cut Phil at age 43. But he wasn't done yet.

After playing Niekro relaxed a bit, returning to baseball in '91 to coach in the Atlanta system. In '94 he began co-managing the Colorado Silver Bullets professional women's team with his brother Joe. That lasted through '97, when the team folded. That was also the year Phil was elected to the Hall. Since then he has been retired in Georgia. 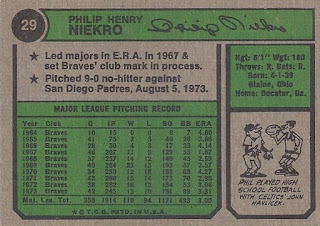 There's Phil's no-no in the second star bullet. Four of the five 1973 no-hitters have already appeared in this set (Jim Bibby threw one and Nolan Ryan two). I like the cross-sports reference in the cartoon. Hondo was probably a hell of a football player. I also notice that Phil signed his name with a left-handed signature.

Sanguillen to Niekro should be easy enough given their long NL careers: