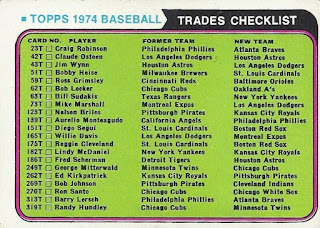 Because I am a little winded from my last post, generally lazy, and have no place to put this that is not completely random, I am posting this card here. It has no number so I guess it doesn't matter.

There is not too much to say about this card. It looks a lot like the regular checklists with its green front and black pennant. If you are a bit of a dweeb like me you can try and figure out from the list who was traded for whom. The second and third guys were traded for each other, but I will get to those cards soon enough.

I honestly do not know if this card was issued in the packs. I don't think so. I got it by just buying all the Traded set in one transaction years after I had collected the set. A quick glance does show that the Dodgers had the most monumental trades that year; very significant since they would go on to win the pennant. 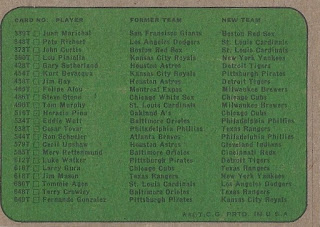 Since there is no way to do the degrees of separation exercise, how about these ones? How many Hall of Famers on the card? Just one - Juan Marichal. How many future managers? One again - Lou Piniella. No MVP's but there are two Cy Young winners (Mike Marshall and Steve Stone) See? The card is kind of a yawner. Not even any errors.
Posted by wobs at 5:43 AM