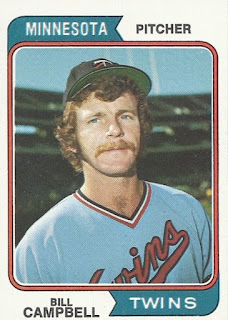 This is Bill Campbell's rookie card. Like John Hiller from a couple cards back, Campbell was a workhorse reliever, pitching well over 100 innings in relief a bunch of seasons. Bill was a pretty good-looking guy; pretty hairy too. Here, I believe, he is photographed at Oakland, where he wouldn't pitch until September so this shot is likely from an off say for him. There wouldn't be too many of those for Bill, who sort of sneaked in to make his MLB debut and did quite well as a set-up and long guy who also got seven saves of his own. He was a nice change from the high-profile burnouts the Twins also brought up that year

Bill Campbell was born in Michigan and grew up in California where his big sport was hoops and he didn't play baseball until his senior year and there was a position guy, primarily third and outfield. After graduating high school in '66 he went to Mount San Antonio College, a local JUCO school, where he was asked to pitch because of his strong arm and had a coach who taught him a screwball, which would be his out pitch. But Bill only lasted a season there because he had to quit to work to get enough money to go to a four-year school, which was his plan. But during that break, Uncle Sam called and Bill's "college" would be Vietnam, where he was a radio operator in the 101st Airborne. That information comes from Baseball Almanac which further references an interview Campbell gave in which he indicates that he saw a lot of action, which I guess puts the stress of relief pitching in perspective. Bill got back stateside in '70, hooked up with a college-based team in Long Beach that summer, and was spotted by a Twins scout while pitching a no-hitter. Signed later that year, he had to complete some military obligations and got a late start to the '71 season in A ball, but hit the ground running with excellent numbers. In the minors Bill was pretty much exclusively a starter and in '72 had another very good year in Double A. '73 started off real well in Triple A and that July Bill got the call to Minnesota. He would never pitch in the minors again.

Campbell's debut went so well that in '74 he took on the closer role in '74 and responded well, going 8-7 with a 2.62 ERA and 19 saves in over 120 innings. '75 would be a weird season: off to a great start in April, Bill tweaked his shoulder - that would be a recurring element of his career - missed a week and came back to some bad outings. Shortly thereafter he was put in a spot role and in his fourth start threw a shutout against Texas. In another game he threw nine innings of one-run relief. So his pen numbers got reduced a bunch and he only had five saves. But he made up for that big in '76 when he had his monster year with 17 relief wins - so he's the guy that tied John Hiller's record - 20 saves and some considerable points in the Cy Young and MVP race. Bill threw over 160 innings that year and led the AL in winning percentage - he was 17-5 - games, and games finished, winning the Fireman of the Year and the new Rolaids Relief awards. Pretty good timing for him, too, because Bill played without a contract that season and after it would be the first of the big name new free agents to sign with a new team, hooking up with Boston for a four-year, million dollar deal.

In Campbell's first year with the Sox, he pretty much repeated his big prior season. He went 13-9 with a 2.96 ERA with an AL-leading 31 saves in 140 innings. He again won the double awards and '77 was also his All-Star year. From what I remember, Bill hurt his shoulder early in '78, tried to pitch through it, and went on the DL for about a month. While he threw much better the second half, he had more blown saves than saves, he lost his closer spot, and his stats fell pretty hard. Arm pain continued to plague him throughout his years in Boston and from '79 to '81 Bill totalled only 144 innings and 16 saves while going 8-5 with an ERA over 4.00.

After the '81 season Campbell again went the free agent route, hooking up with the Cubs and in Chicago had a bit of a resurgence, pitching over 100 relief innings each of the next two seasons. He led the NL in games in '83 with 82 and during those two years went 9-14 with 16 saves in 144 games with an elevated 4.13 ERA. In '84 Bill went to the Phillies in the deal that got Chicago Bob Dernier and Gary Matthews, two pieces that helped the Cubbies get a division championship. Bill threw well for Philly in '84, going 6-5 with a 3.43 ERA and a save as a set-up guy. He then went with Ivan DeJesus, another former Cub, to the Cardinals in '85 and in the same role went 5-3 with a 3.50 ERA and four saves. He pitched well in the post-season that year. In '86 he went to Detroit where bone chips in his elbows curtailed any forward momentum and then finished his career in '87 with Montreal. Bill went 83-68 with a 3.54 ERA, two complete games, a shutout, and 126 saves. In the post-season he had a 1.42 ERA with over a strikeout an inning in his six games.

Campbell's nickname was "Soup." Too bad he didn't play in Japan - he probably could have worked out a good product placement gig. For a couple years after his playing career ended he worked for a sports marketing company and then in '89 played Senior League ball. He then returned to marketing work and did some coaching and by '99 was coaching for the Brewers. From 2000 to '02 he coached in the St. Louis system before he retired to the burbs outside Chicago. 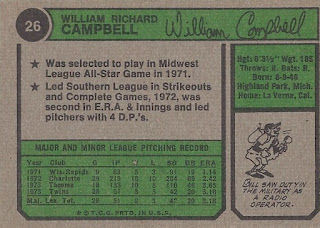 As per the back of his card, Bill was strictly a starter in the minors, where he had some nice seasons. The cartoon makes his military stay look a lot more benign than it seems to have been. According to the Baseball Almanac site, he was one of only five Major Leaguers to see time in Vietnam, which seems low. They do not mention Garry Maddox, for instance, and I am pretty sure he spent some time there. I will look at that more closely for his card page.

We hook up Mr. Campbell and Mr. Singleton as follows: