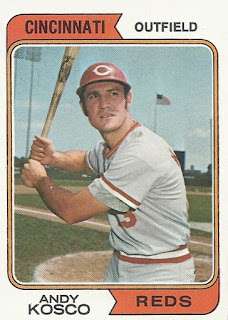 This is Andy Kosco's last card. Anyone that reads this blog knows by now that I suck at placing photos, but I am giving this one a shot. It is Shea Stadium in NY. Andy had returned to the NL via an off-season trade with Boston, he and Phil Gagliano coming to Cincinnati for one-time pitching phenom Mel Behney. With the Reds Andy would be a reserve outfielder, posting some decent offense in that role and then getting some starting field time in the playoffs.

Andy Kosco was signed by Detroit in '59 after some big athletic feats at his Youngstown, Ohio high school that included a .700 batting average his senior year. That summer, away from home for the first time and only 17, Andy had a tough time in D ball. Things picked up a bit the next year in B ball when he put up 22 homers and 73 RBI's but with a few too many strikeouts, which would be a continuing facet of his offense. In '61 he kept his RBI's up but his homers tumbled hard in A ball and in '62 he hit .284 at that level but the homer total fell to six. Then in '63 he bottomed out, hitting only .208 with no homers in Double A. So in '64 it was back to A ball and though his numbers to start the season were a bit better, Detroit cut Andy loose that June.

Kosco was picked up almost immediately by the Twins and manager Vern Morgan, who gave him a quick hitting tutorial that included an end to his switch-hitting. It worked fast because Andy ended up winning the triple crown in his A league that year and followed it up with some very good IL numbers. Then in '65 he moved up to Triple A and took his offense with him, posting a .327/27/116 line with 36 doubles in about three quarter's of a season. He got called up to the Minnesota outfield in August to do some reserve outfield work during their pennant year, but did not see any post-season action. In '66 he remained up top but didn't get too much playing time so most of '67 was spent back in Triple A where he put up a .297/13/67 line. After that season Andy was sold to Oakland and then got picked up by the Yankees in the Rule 5 draft. Rule 5 basically stated that if a player with a minimum of five years minor league service was not protected on the Major League roster he was fair game.

Kosco immediately moved into the starting lineup with the '68 Yankees, putting up numbers as good as anyone else in the NY lineup that year. After a year in NYC he was traded to the Dodgers for Mike Kekich and in '69 had his biggest year up top, leading the team in home runs and RBIs. After diminished playing time in '70 - he lost his starting spot to Willie Crawford - he was traded to the Brewers for Al Downing, where according to his interview on the baseball-reference site, he was not terribly happy. From Milwaukee he went to the Angels, the Red Sox - where, again according to baseball-reference "he was a couple years younger than ... Carl Yastrzemski" (that cracks me up) - and finally the Reds. He also spent some '73 time in Triple A where in just 202 at bats he posted a .312/11/47 line around his MLB time. After a short year in '74 with Cincy - he got hurt fighting Ed Kirkpatrick of the Pirates - he was done up top. He played a year for the Phillies' Triple A club in '75 and that was it. Andy finished with a .236 average with 73 homers and 267 RBI's and in the post-season hit .300 with a .417 OBA in his three games. The interview with Kosco was done before the '75 season began and while it is a tad amateurish, it is interesting. It can be found here. He also has a SABR page.

Following baseball, Kosco got a law degree and went into the insurance business, for many years running his own agency. Sounds like he was a productive guy. 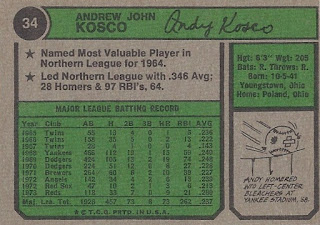 The back of Andy's card makes note of his '64 minor league season which was terrific and shows the numbers that won him his triple crown ('65 was better). Why is the cartoon a big deal? Because that part of the outfield was known as "Death Valley" and a ball hit into those bleachers would have had to be hit at least 450 feet. In fact, Andy reportedly hit so many warning track shots that year - over 24 by mid-season - that the prime reason he was traded to LA was to give him the opportunity to hit in a smaller stadium.

This one is easy:

I guess they were both younger than Yaz.
Posted by wobs at 3:20 PM