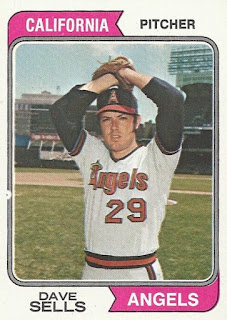 The title of this post sounds like an incomplete sentence as in "Dave sells...what?" Insurance? Used cars? Sorry about that.

This is Dave Sells' first and last card. And '73 represented the only year of Dave's caeer that was spent exclusively at the MLB level. And he didn't do a bad job either, posting a good record and ten saves. The only real knock on Dave that year - and it would be a career one as well - was that his control was a bit off, demonstrated by his walk and strikeout totals. Another telling stat was that he was a 26 year old rookie. But it does look like he's going to peg the photographer straight in the puss if he has to pose any longer.

Dave Sells grew up in Vacaville, California, where he played high school ball with Bobby Heise, a future Angels teammate as well. After that he attended Solano Community College where he again presumably played ball - and may have been a position guy as well as a pitcher - and also reportedly played in the summers. That would make sense because Dave was signed by the Giants just prior to the beginning of the '68 season. Initially, at least, Dave was strictly a reliever and he put up some nice numbers that first year in A ball and did it again the next year at the same level while recording 15 saves, his first season in the California system after being selected in the minor league draft. He saved 15 again in Double A in '70 but his ERA got pretty fat. But he fixed that the following year at the same level and in his bit of Triple A work, a season in which he posted a combined 14 saves. After a nice start to the '72 season - eleven saves - at the higher level in '72, Dave made his MLB debut in August and brought most of his good stats up with him.

In '74 Dave was seldom-used and it is inviting to assume he may have been injured. His stats for the Angels were pretty good and when he was sent down to Triple A the first time in June he had a 2.07 ERA up top. He got back to Anaheim in July, continued to throw sparingly but well enough, and then after a couple bad performances in early August was sent back down. He then began '75 in Triple A in the rotation, got upstairs in June to throw some crappy innings, and in July was sent to LA for Jim Brewer. For the Dodgers he turned the same trick, throwing pretty good ball in his Triple A rotation and not too bad upstairs, although he was almost never used. '76 was all Triple A rotation again, but this time with a big ERA and a losing record in Dave's final year in The States. After a season in Mexico in '77 he was done. Dave finished with an MLB mark of 11-7 with a 3.90 ERA and twelve saves. In the minors he went 62-46 with a 3.48 ERA and about 65 saves. And he could hit (hence my speculation above), posting a .241 average in the minors and a 1.000 average up top.

It appears that Sells never left Vacaville and after his baseball career returned there full time. There is currently a David W Sells listed there who owns his own tree service company so it is not too much of a stretch to assume it is this guy.

Now let's review what an idiot I am. This shot of Sells is clearly taken at Yankee Stadium. But I am almost positive Dave is wearing a home uniform. It is certainly the same uniform from the Angels' team picture. So I don't know what's going on with this picture. I am going to list this one as an away uniform anyway but, yes, I'm confused. 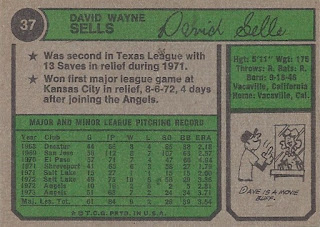 Nothing is terribly notable about the back of this card. Sometimes you have to give credit to the Topps cartoonist because he or she had to put SOMEthing down. I wonder if Sells liked "Chinatown"? That would have been appropriate.

To get from Sells to the '73 Cards requires some work. Let's try this:

I could also go through Bill Singer and Dick Allen, but that takes just as long.
Posted by wobs at 7:03 AM