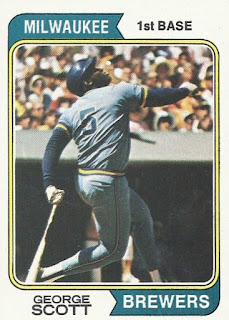 Back to the action shots! We will have a two card rally of these and it leads off with Mr. Scott, neither the Star Trek guy nor the guy that played Patton. This guy's nickname is Boomer and here he is looking skyward at a ball hit off an Oakland pitcher at their park. Judging by the angle, though, I don't think it is one of his taters - homers - but just a pop-up to the infield. It is a dramatic photo nonetheless. And '73 was a pretty dramatic season for Boomer as well: a significant reduction in his strikeout totals helped contribute to his second ever .300 season, his first ever 100-RBI season, his highest homer total since his rookie year, and the AL lead in total bases. Why he didn't get a special card number in this set is a pretty big mystery.

George Scott was - mostly - an All-Star first baseman in the AL. He was signed by Boston in '62 out of his Mississippi high school where he was a QB and shortstop of his two state champion teams. That first year he had a tough time in D ball, striking out 86 times in only 223 at bats, and a hallmark of his career would be that he whiffed at a pretty good clip throughout. He played second and third that season and had a tough time defensively as well. In '63 Boomer's club moved to A ball and he mostly to third where he posted much better defensive numbers as well as offensive ones, hitting .293 with 15 homers and 74 RBI's. '64 looked like it could have been another good year at that level but Boomer missed a significant part of the season to a knee injury, but it was followed by a decent IL season in which he put in his first time at first base. In '65 Boomer moved to Double A where he played third exclusively and had a banner year, winning his league's triple crown with a .319/25/94 year. After another good fall season, he made the cut in Boston.

In '66 Boston was in the midst of an overhaul that would get the Sox to the Series the next year. Longtime third baseman Frank Malzone and '65 first baseman Lee Thomas were both gone and the Sox had some hot prospects to replace them. In the latter position they had Tony Horton, who'd come off a pretty good '65 call-up run. And at the hot corner they had not only the Double A mvp in Scott but also the Triple A mvp in Joe Foy. But Foy had a tough spring training, so on Opening Day Boomer was at third base, where he would stay for all of five games. Veteran Eddie Kasko took over third until Foy was ready to get there full-time and Boomer moved over to first since Horton wasn't - nor would he ever really be - ready. And George kicked in his new spot, doing excellent defensive work, and by All-Star vote time was having a big offensive year, hitting .330 with eleven homers just over a month into the season and got the starting gig at the game. Thereafter his numbers fell off considerably but he still had enough oomph to make the Topps team that year.and finish third in ROY voting. He also set a rookie mark for strikeouts. In '67 he would avoid the sophomore jinx completely - or put it off for a year - as his big numbers helped take the revamped team to Game Seven against St. Louis. He also won his first Gold Glove that year. '68 was then his disaster year. Boomer and manager Dick Williams didn't exactly get along and Williams was always on George about his weight, which tended to get pretty big sometimes. Boomer couldn't even reach Mendoza levels with his average, lost some starting time, and finished the season in a deep depression, though he did win another Gold Glove (which he would do every year that first base was his primary position through '75). The following winter he played for Frank Robinson in PR, got his mojo back, and when Boomer returned to Boston he was given the third base gig again in the wake of Foy's departure to Kansas City in the expansion draft. Boomer did fine in the field but was doing a pretty good reprise of the '68 year at the plate, still sub-.200 at the end of May. But from then on he hit .279 to cap a decent comeback year. In '70 he began the year at first while Boston tried a new hotshot at third base, Luis Alvarado. When Alvarado didn't pan out, Boomer was back at third and stayed there for pretty much the balance of the season, not including the month he missed to injury. Still, he had another decent season, just missing .300, and definitely enjoyed things more under his new manager, who happened to be Kasko. In '71 George moved back to first full time, amped up his power a bit, and at the end of the year departed in a big trade: he, Ken Brett, Jim Lonborg, Don Pavletitch, Billy Conigliaro, and Joe Lahoud went to Milwaukee for Tommy Harper, Marty Pattin, and Lew Krause.

Scott immediately became a fan favorite in Milwaukee and his first season there celebrated by stealing 16 bases, a career high. He also put up his highest RBI total since his rookie year. After his big '73 he would alternate good and great seasons in Milwaukee, in '74 and '76 averaging lines of .288/18/79 but in '75 posting his biggest season with a .285/36/109 year in which he led the AL in homers and RBI's. Following the '76 season he returned to Boston with Bernie Carbo in the deal that brought the Brewers Cecil Cooper. Boomer had a great '77 with a line of .269/33/95 with 103 runs scored when the Sox almost won the division. But '78 was a not fun season as injuries struck, first a back problem that caused him to miss three weeks, and then a broken finger that never really healed, both sapping his offense. He began '79 slowly, was traded in June to Kansas City for Tom Poquette, and hit .267 for the Royals before an August release. He was picked up by the Yankees and for them hit .318 the final month of the season. That would be Boomer's final MLB season and he finished with a .268 average with 271 homers and 1,051 RBI's. In the post-season he hit .267 in eight games. Defensively he is in the top 40 all-time for putouts, assists, and double plays at first. He also finished with three All-Star appearances and eight Gold Gloves.

Scott was let go by the Yankees following the '79 season and picked up by Texas, who offered him a reserve role, which Boomer shot down. So he moved professionally to Mexico, where he played through '84 and also managed a couple seasons. He hit well down there, putting up a .355 average in '81 and a .330 in '82. After playing he continued to coach south of the border until he returned to The States and from '91 to '95 managed the team at Roxbury Community College. He then managed teams in independent ball until he retired following the 2002 season. 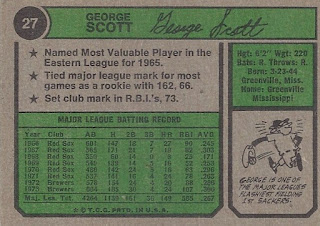 The card back lets us know about his 1973 Brewers RBI record. It broke Tommy Harper's, for whom he was traded. Boomer's stats illustrate his tendency to be up and down quantitatively during his career. I do not particularly remember Boomer being a flashy fielder - certainly not along the lines of Willie Montanez - just a really good one.

Since we have a rare case of one AL card following another, the separation exercise should be short: