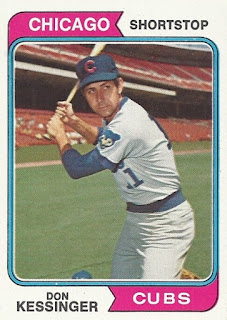 Don Kessinger was the workhorse shortstop for the Cubs. While he did not go Cal Ripken on anyone, he did average 600 at-bats for the ten years from 1966-'75. Here he is photographed at Candlestick (any of these that I get right from now on get attributed to Jim who has educated me park-wise). '73 was a pretty typical Kessinger season, which means it was pretty good. Don led NL shortstops defensively in putouts and double plays and finished second in assists. Offensively he had a typical season but because nobody behind him in the Chicago lineup was hitting, his runs total declined from pushing 80 to 53. And for the only season in a seven-year run he was not named an All-Star, even though he was hitting around .290 at selection time. So maybe that's why he looks a tad ornery in his photo.

Don Kessinger was a big deal four sport athlete while growing up in Arkansas, adding track to the big three sports. He then attended the University of Mississippi where he not only played baseball but was a hell of a hoops player (check out his baseball-reference bullpen page to see with whom he was named All-60's SEC; pretty impressive). Signed by the Cubs just after his senior year ended, Don hit .236 while providing some decent D in Double A ball that summer before a short late look in Chicago. The next year at the same level he raised his average 50 points, stole 20 bases, and cut his errors in half. This impressed everyone enough that when he was called back to Cubbie land that summer, it was for good.

In the latter half of '65 Kessinger basically went straight to the starting shortstop job for the Cubs, replacing a guy named Andre Rodgers. Don's average was pretty lame but his defensive skills were evident pretty much immediately. In '66 he added a bunch of points to his average after manager Leo Durocher suggested he become a switch-hitter. In '68 he was named to his first All-Star team and in '69 he had perhaps his biggest offensive year while topping out in runs with 109 and in doubles. He was an All-Star again and would be every year through '72. In '70 he scored 100 runs and posted his best triples number; in both '69 and '70 he was a Gold Glove winner. In '71 and '72 the runs would dip to 77 per season but his other stats retained their levels. In '74 he hit .259 and scored 83 in his final All-Star season and in '75 he played a little third base in addition to his duties at short. In his ten year full season run ending that year, Don led NL shortstops in putouts, assists, and double plays three times each and in fielding percentage once. After the '75 season he was traded to the Cardinals for Mike Garman and a minor leaguer..

In '76 Kessinger served as the starting shorstop and sometimes other infielder, hitting .239 while putting up other stats that resembled those of his '73 season. He then served as a transition guy to Garry Templeton the next season before an August trade that returned him to Chicago, this time for the White Sox. Don split time at short the rest of the way and then in '78 was the regular guy there as he pushed his average to .255. In '79 he became a backup while also being named the team's manager. In that latter role he went 46-60 in his only MLB experience. Before the end of the year he would retire as a player and be replaced in the managerial role by Tony LaRussa in that guy's fist gig up top. Don finished with a .252 average with 527 RBI's and 100 stolen bases. Defensively he is 35th all-time in putouts for shortstops, 15th in assists, and 21st in double plays.

Following his career in baseball, Don became involved in insurance and real estate back in Mississippi. During the '90's. he returned to Ole Miss as its baseball coach - going 185-153 - and it's AD. He currently manages his own firm in Oxford. His son Keith played very briefly for the Reds in '93. 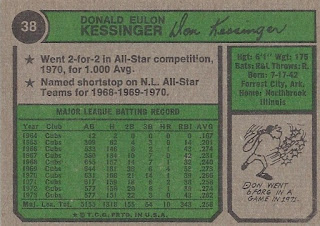 Don has one of the best middle names I have seen so far. His 6-for-6 game occurred June 17, 1971 against the Cards. I guess all those hits were needed because the Cubs took 10 innings to win 7-6. In '69 he also started the season with 54 errorless games.

For the hookup this time I will use Bill Singer plus Don's backup:

That last line sounds like a law firm.
Posted by wobs at 7:04 AM