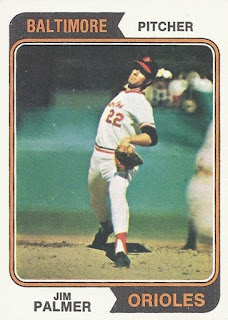 Whoa! Jim Palmer. When I was a kid in the 70's there were three things that were assured every summer: I was going to work like a dog to pay for everything I did during the year; I wasn't going to get any action; and Palmer was going to win 20. They all generally came true.

Jim Palmer won 20 games eight times in his career. If he didn't get hurt early in his career he probably would have won that many at least two other seasons. Maybe three since he completely missed '68 - The Year of the Pitcher. So Jim's '73, while excellent, was pretty mundane for him back then: all he did was win 22 games, lead the AL with his 2.40 ERA, and win his first Cy Young Award. In this shot he shows off his nearly aqueous delivery in Baltimore.

Palmer moved around a bit as a kid - see card back - and by the time he got to high school, settled in Arizona. There he played football, hoops, and baseball and in that last sport played center as well as pitched. After his senior year of '63 he played in the Basin League for a team with a loose affiliation with the Orioles and was signed later that summer. He missed any pro ball that year and then the next went 11-3 in the rotation in A ball and then pretty much preserved those numbers in fall IL ball. Baltimore had seen enough and the next year he joined the O's out of the gate as a set-up guy. He then moved into the rotation, and was one of the team's top starters on the '66 Series winner. He hurt his arm early in '67 and the next two seasons were a wash as he went only a combined 1-3 in the minors in '67-'68. Jim's prognosis was so bad, in fact, that he was left unprotected for the expansion draft and nobody took him! (though that seems a bit absurd). Bad miss by those four teams if so.

After his extensive recovery, Palmer came back strong in '69, leading the AL in win percentage while posting a tiny ERA. That year, not too coincidentally, Baltimore returned to the Series. Then came the '70's which outside of '74 - another hurt arm - he dominated. In '70 Jim put up his first 20 victory year. In '71 he was one of four Baltimore starters to win 20. In '72 he posted both his best ERA and strikeout ratio as a starter. All three years he was an All-Star, a status that eluded him somehow in '73. After the injury year of '74 - he missed two months - he picked up where he left off the following year, going 23-11 with a 2.09 ERA and ten shutouts - all those stats led the AL - to win Cy number two. Cy number three came in '76 when he went 22-13/2.51/six. Jim won 20 in '77 - he led the Al in wins those three years - and 21 in '78 before more arm pain threw him on the DL in '79 and contributed to a 10-6 season, though his team did get back to the Series that year.

Palmer had an incredibly smooth delivery, demonstrated in part in this photo. It really was something to see. I tried to find a clip on YouTube but no luck. Surprisingly, the only guy I remember who had a motion that even approached Palmer's was Sparky Lyle. I am pretty sure that personality-wise those two guys could not have been more different. 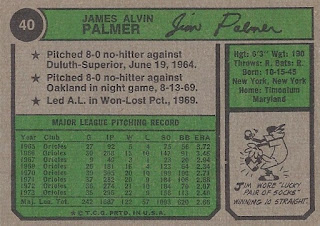 Jim was born in NYC? That's pretty ironic since I think he was no Yankee fan. He was also adopted - twice! When he played in the Basin League his team was populated with future MLB guys - Merv Rettenmund, Jim Lonborg, Curt Motton, and Bobby Floyd, who is coming up next. What I like about Jim's stats is that the years that stand out are the ones he DIDN'T win 20. So what was the stinky sock season? It was 1969 and Mike Kekich broke the streak.

We have two AL guys in a row so I hope it helps:

Lots of ex-Yankees coming up in these.
Posted by wobs at 7:07 AM