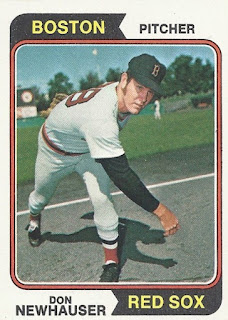 Don Newhauser is the first card I had trouble finding in this set. I keep my cards by team and not by number and I had to go through pretty much the whole set before I found this guy. He is the first Red Sox player featured and it's about time as the Bosox are the last AL team represented. It appears Don is about to slide off the field in what I believe is a spring training shot. And Don sort of slid off everywhere in '73 as that year he only put in a combined 31 innings between Triple A and Boston. And at both levels he threw pretty well so he probably wasn't benched. That leaves the usual suspects of injury (likely) or military duty (less so since Don was already 25 by then). But as will be seen, Don is a tough monkey for whom to collect data.

This is Don Newhauser's first and last card. Ironically he played his most baseball in '72 and did not have a card in '73. He was drafted by the Red Sox in '67 out of Broward Community College in the second round, which would indicate he had a couple good years there. He then spent the next four-plus seasons in A ball, which is odd, since his numbers in the pen were quite good every year, particularly in '69. He finally moved up to Triple A the second half of '71 and that year posted a combined twelve saves. After bettering his ERA a bit at that level in '72, Don came up that June to Boston.

Newhauser had an awfully good rookie year in '72 for the Sox, adding four saves to his card numbers, but again wasn't used terribly much. After his disappearing act in '73 he put in a few '74 innings up top but spent most of the season back in Triple A where he went 1-4 but with a 2.09 ERA in just 43 innings. That sparse time despite good numbers reinforces the injury supposition. '75 was all Triple A again - 4-7 with a 3.49 ERA and five saves - before a sale to Pittsburgh. For the Pirates Don did one more year of Triple A work, going 5-2 with a 3.00 ERA and six saves. For his MLB career he went 4-3 with a 2.39 ERA and five saves and in the minors he was 47-39 with a 2.67 ERA.

And that's it. Newhauser was originally from Miami but that was no help in finding out any info on this guy, so his post-baseball goings on is a mystery. At least for this writer. 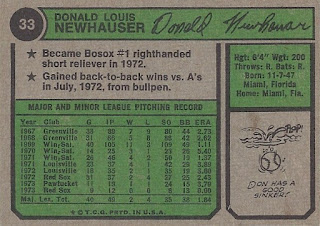 Not much to say regarding the back. As said above, the numbers are not bad and according to the first star he received some positive notoriety, although with only 37 innings he must have become the number one guy awfully late in the season.

With only one meaningful season, the separation exercise may be tricky:

This is another one I suspect may have a shorter route but I can't find it.
Posted by wobs at 3:18 PM