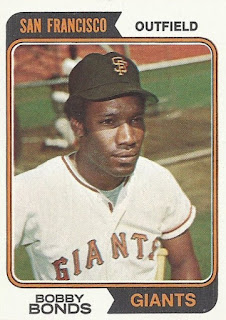 Yes this guy had a famous kid, but Bobby Bonds was a hell of a ballplayer in his own right. The knock on him was all the strikeouts, but he was an exciting player who added power and speed at the top of a lineup for ten good years that pretty much encompassed the '70's and then some. This would be the last of the Bonds Giant cards since his '75 card has him airbrushed - horribly I might say - into a Yankee uniform. While he did set two records in his one NY season, he arguably had his best years in San Francisco. And '73 was no exception as Bobby led the NL in runs scored with 131 while also doing his speed/power thing with his 39 homers and 43 stolen bases. He was also an All-Star and a Gold Glove winner, both for the second time. This photo of Bobby is taken at Candlestick and I want to say it's from some time in '72 because that looks like Fran Healy catching and Jim Ray Hart taking batting practice in the background (both were elsewhere in '73). But what do I know.

The Giants signed Bobby Bonds in '64 out of his California high school. Bobby came from an athletic family - his sister was an Olympian that year - and he was a track All-American on top of his feats in the big three sports. He played some local ball that summer so didn't get rolling professionally until '65 but had a big year in A ball that year with a .316/26/88 line with 34 stolen bases and 109 runs scored. '66 was another A season that was a small discount - .262/26/91/18/19 - but was followed by some pretty good IL ball. His numbers fell a bit more in a Double A '67 season but his IL season was a big uptick and in '68 Bobby was in Triple A where his .370/8/47 line in just 60 games got him to San Francisco before that summer started.

Despite the mid-season call-up Bonds showed enough potential to be named to the Topps Rookie team in '68. Bobby was already being compared to Willie Mays so that whole "potential" thing would be the millstone around his neck for his whole career. A big sophomore year followed in '69 when he stole 45 in his first 30/30 season, led the NL with 120 runs, and on the downside set a record with his 187 strikeouts. '70 was generally better as Bobby topped out in hits, runs (with 134), doubles, triples, and average. He also added two K's to that strikeout record. In '71 he had his first All-Star and Gold Glove year, dropped the K's a bit, but also the steals as a bruised rib cage hit him late in the season, making it difficult to slide, and actually kept him out of some playoff time. By then Bobby had become the team's first multi-year starter in right field for a long time. He initially played alongside Willie Mays - Barry's godfather - and then was part of an excellent young outfield that included Gary Matthews and Garry Maddox. That second Garry arrived in '72 and the first in '73. '74 was a bit of a discount to the prior year, though he got his third Gold Glove, and after that season Bobby left the Giants in a deal for another All-Star, going to the Yankees for Bobby Murcer.

Bonds' only NY season was a bit tough. Bobby Murcer was super popular in NY and was probably the team's best player still when he departed. The Yankees picked up this Bobby because they just missed out on a division title in '74 and thought his speed at the top of the line-up was the piece that would get them there. But though he had a good year - Bobby set two records with his third 30/30 season and most lead-off home runs - he got hurt in June, played through his injury, and his .270/32/85 season was viewed as disappointing. So after that season he was on the move again, this time to California in the deal that got the Yanks Ed Figueroa and Mickey Rivers, two key players on the Yankees successive three pennant teams. With the Angels, Bobby was again bedeviled by injuries, missing nearly half of the '76 season. But '77 was a nice bounce as he recorded a line of .264/37/115 with 103 runs and 41 stolen bases. After that season he was sent to the White Sox in the deal that moved Brian Downing to Anaheim and shortly into the '78 season he went to Texas for Claudell Washington. Combined he put up his final 30/30 season - number five - and then for '79 he went to Cleveland with Len Barker for Larvell Blanks and Jim Kern. With the Tribe Bobby would have his last big season with a .275/25/85 line but with a telling 23 times caught stealing - against 34 successes - that led the AL.

Bonds was a big smoker throughout his career as well as a reportedly big drinker. By the end of the Seventies his wheels were fried, as was most of his power. In '80 he returned to the NL for St.Louis for whom he did outfield reserve work. He was released after the season, picked back up by Texas, for whom he played a bit in Triple A, and then was sold to the Cubs. That got him through '81 when his speed left him at 35 but the strikeouts did not. After a year with the Yankees Triple A team in '82 he was done. Bobby finished with a .268 average with 332 homers and 1,024 RBI's, 1,256 runs, and 461 stolen bases, in what amounted to about twelve full seasons. In the post-season he hit .250 with a .400 OBA in his three games. Defensively he is 25th all time in right field putouts, 36th in assists, and twelfth in double plays.

After a year off in '83 Bonds returned to baseball as the Tribe's hitting coach for four years ('84-'87). He then took some time to work on his sons' careers; besides Barry, Bobby Jr. played as well, putting in ten years in the minors. This Bobby did the Senior League thing in '89 as both a player and manager. He then returned to Frisco as a coach from '93 to '96 before then doing some admin work for the team. But his hard living caught up to him and he passed away in 2003 at only 59 years old from lung cancer and heart problems. 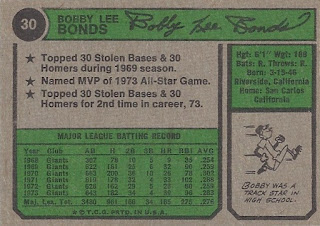 Bonds had a great '73 and it should be remembered that he got those RBI totals batting lead-off. He finished his career with five 30-30 seasons which helped get him fifth place all-time on the power/speed list on baseballreference.com. I like the incorporation of his middle name in his signature.