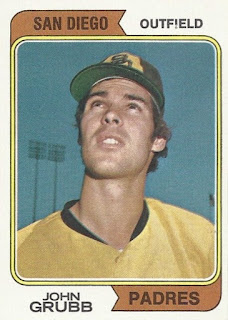 Johnny Grubb is a milestone card in the 1974 set for two reasons. The first is that he is the second Topps Rookie All-Star team member for the 1973 season. Johnny pretty quickly established himself up top as a good contact/good on base guy and posted a nice average and .373 OBA from the leadoff spot while playing center field.The second - and more significant for the set - is that Grubb is the first San Diego Padre in the set. That means that he is also the first Washington player in the set. The last bit requires an explanation.

Shortly after the end of the '73 season a bunch of noise was being made about bringing a team back to Washington D.C. The Senators had departed D.C. following the '71 season, moving to Texas to become the Rangers. Despite the poor attendance record of the old Senators, pangs were running deep for a team back in D.C. after a two-year absence; there had been a team there since the A.L was founded in 1901. Plans were made to re-locate the Padres and when the Topps set went to print, those plans seemed set. While Topps technically stopped issuing cards in series with the '73 set, cards were issued sequentially during the '74 season. Hence, the traded cards were issued later in the season. Similarly, it became clear that the Padres were NOT moving to D.C. so Topps re-issued the players given "Washington Nat'l" designation as regular Padres cards. The change occurred sometime between card 364 (Clarence Gaston) and card 387 (Rich Morales). That is why every Padres card in the earlier batch also has a Washington card. The ones after the "catch" only have San Diego cards. The only exception is the Rookie card #599 which has a Washington variant. I assume they began putting those cards together earlier than their numbers imply but I do not really know. 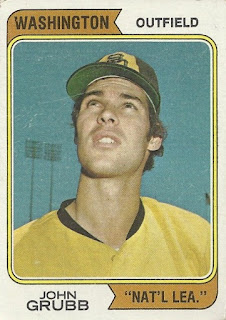 As for Mr. Grubb, he was a hot prospect when signed in the first round of the '71 draft by the Padres, fresh out of Florida State and the College World Series. Johnny had grown up in Virginia a big baseball guy and prior to Florida State had gone to Manatee, a JUCO school in Florida. While at Manatee he was drafted by both Boston and Cincinnati, but instead moved on to his new school. He was then selected by Atlanta in June of '70 but decided to return for another semester. Then the Padres showed up with a better round and presumably better bucks in January of '71. Johnny started hitting right away, posting good averages in A ball in '71 and Double A in '72 while playing the outfield. For a bit the Padres tried Johnny out at third base as well but when they grabbed Dave Roberts out of Oregon with the first pick in '72 that experiment ended. Johnny got up to San Diego in September of the latter year and after hitting well in his quick trial was up to stay.

Grubb came out of the box strong in '74 and his .316 average around selection time contributed to his being named to the All-Star team. He would slow down a bit in the second half and finish with a .284 and in '75 a .269 but he would keep his OBA up there. In '76 San Diego picked up Willie Davis so Johnny got moved to the corner spots and also missed a month-plus to injury, though around it he pushed his average back up to .284 and posted his best San Diego OBA of .391. Following that season he was sent to Cleveland in the trade that brought the Padres George Hendrick. From that point on Johnny was strictly an AL guy.

'77 was a tough year for Grubb, which is too bad because it looked like it was going to be a good one. A nice stretch in May had Johnny hitting above .300 with a .425 OBA when in his first game in June he was hit on the hand by a pitch from Gaylord Perry. That pitch shattered Johnny's hand and he missed the rest of the season. The next season Johnny stayed healthy and though his average came down a few notches, he was posting by far his biggest power season when in late August he was sent to Texas. He would finish that year with a .275/15/67 line. With Texas Johnny would go into platoon mode, swapping time mostly with Billy Sample, but also with Richie Zisk and Leon Roberts. He wouldn't provide as much pop as in '78 but outside of a tough '81 he would generally hit in the high .270's and post an OBA that was about 90 points higher. Prior to the '83 season he would go to Detroit for pitcher Dave Tobik.

After playing, Grubb was pretty low key. He returned to his hometown area and in '89 did the Senior League thing. In '90 he coached in the Atlanta system and then with the Niekro brothers coached the Silver Bullets women's professional team for a few years. In 2000 he returned home full time and for the next ten years coached his alma mater's high school baseball team. Since then he has been retired. 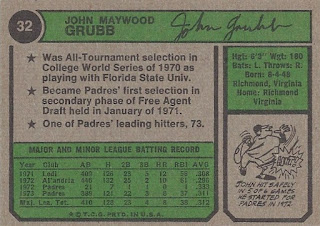 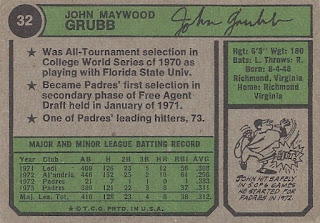 I have scanned both the San Diego (top) and Washington backs for Johnny. They are identical and in the future I will just scan one back. Grubb's quick minor league success is apparent on the stat list and all references point to his good hitting.

Linking Grubb to Gomez should be easy and hard, respectively. Let's see. For Gomez as manager:

For Gomez as player:

So I had to recycle the names from the last post. Without Eddie Yost, the list would have doubled.
Posted by wobs at 3:03 PM