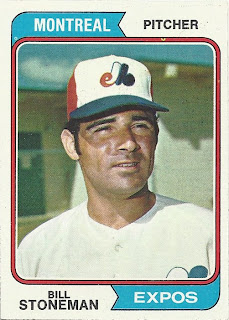 Before Steve Rogers emerged as the ace of the Montreal staff there was this guy, who looks quite cheerful despite standing in front of one of those nasty buildings at the Expos spring training site. Though Bill Stoneman had an off year in '73 - and they wouldn't get any better - he'd already thrown two no-hitters as an Expo and owned most season and career pitching marks for the team when this card came out. But prior to the '73 season he got into a contract dispute with management - ironic considering his future career - and when he tried to make up for lost pitching time in spring training, he hurt his back. He never really recovered as a pitcher and by the time this card hit the stands he was already playing for the Angels. But he'd be back

Bill Stoneman was born outside Chicago but moved to California as a kid and developed into a high school pitcher in West Covina, from where he graduated in '62. He then went to Mt. San Antonio college, a local two-year school, and then the University of Idaho, from where he graduated with a bachelors degree in PE in '66. Drafted by the Cubs that summer he moved through some military time and three leagues to record a 1-2 record with a 2.70 ERA in only 40 innings. He then spent the early part of '67 mostly at Triple A and went 5-2 with a 3.00 ERA before being called up to Chicago that July. He did a pretty nice job pitching mostly out of the pen and got four saves. In '68 more military time interrupted his summer as did some time back in Triple A when his ERA inflated a couple runs. In the off-season he was selected by the new Expos in the expansion draft.

Montreal was no easy place to pitch with a generally sub-par defense for its first few years. Stoneman wouldn't help himself either by giving up too many walks. But his first April north of the border he threw his first complete game in '69. It would also be his first no-hitter. After leading the team in wins he returned to have a not so great second season. But in '71 he put together a fine year, winning 17 and leading the NL in starts while also finishing among league leaders in innings and strikeouts. The next season his win total would drop but his ERA improved and he won an All-Star nod. On the last day of the season he pitched his final complete game. Just to keep things consistent, it was also his final no-hitter. But then came the horrible '73 followed by a sale to the Angels and an even worse '74 - 1-8 with a 6.14 ERA. He was released after that season and done as a pitcher. Bill finished with a record of 54-85 with a 4.08 ERA, 46 complete games, 15 shutouts, and five saves.

Stoneman was a busy guy. While still playing he got a Masters degree in PE from the University of Oklahoma. He also was something of a financial expert and almost immediately upon ending his playing career got a managerial job at Royal Trust, first in Montreal and then in Toronto. In '83 he returned to Montreal and the Expos as an accounting manager and was then elevated to the front office the following season. He stayed there through '98 and the following season was hired by the Angels as GM. He had a nice run in California, winning a Series in 2002 and making the playoffs in four seasons during his residence though 2007. After stepping down following that season he became and has remained a consultant to the front office. 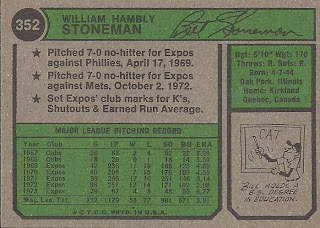 All the back of the card stuff has been covered above. He has some middle name.

Bill gets the hook-up with the younger Dwight through a league-hopper: