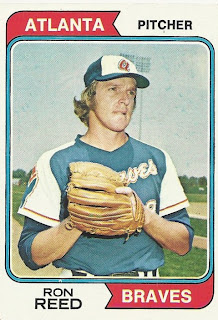 We have had a bunch of guys who played both hoops and baseball in high school and a few who went on to have significant college years in both sports. But Ron here is the only guy in this set to go on to have careers in both the NBA and MLB. Here he seems to be expressing his full 6'6" height at Shea. '73 was a bummer of a season for him as a couple losing streaks early in the season and elbow pain that worsened through the year produced by far the worst record of his career. He was on the shelf by early July which given his role as a starter was one of the reasons Atlanta could never take advantage of its big power surge that year. By that summer he was probably wishing he was back on the court.

Ron Reed grew up in basketball-crazy La Porte, Indiana, a pretty quick drive from Notre Dame. In high school he pitched pretty well but hoops was his game and he went to South Bend on a scholarship for it. By the time Ron was done in '65 he had built a career that allowed him to be ranked one of the top 25 ND hoops players of the 20th Century. He was an especially good rebounder and a pretty good scorer, ranking third all-time for the school in the former and in the top 25 in the latter. He was drafted that year by the Detroit Pistons. The Pistons also got him a tryout with the Braves to appease their future star. Ron had only played his senior year at ND in baseball and the Detroit GM knew the Milwaukee one and the tryout went well. He got in a few games that summer in A ball and did well, going 3-2 with a 1.47 ERA. After an off-season in Detroit he returned in '66 to pitch excellent ball at three levels in the minors: 5-2 with a 1.76 ERA in A ball; 3-1 with a 1.20 ERA in Double A; and 5-2 with a 3.52 ERA in Triple A. At the end of the year he got a couple starts in Atlanta and threw pretty well. The Braves then wanted Ron to throw winter ball but instead he returned to the Pistons where he didn't play as much as he liked and after his last game - in which he scored 22 off the bench - he told player-coach Dave DeBusschere - one of the very few guys who pulled off the double himself - that he was going baseball full-time. After his late spring training start he spent the bulk of the season back in Triple A, going 14-10 with a 2.51 ERA. When he got called up later in the season, it was pretty much for good this time.

In '68 Reed joined the Atlanta rotation and pitched well enough to get an All-Star nod. The next year he upped things by winning 18 on the division-winners. He got bombed in his only start against the Mets but was slotted as the number two guy for '70 when he broke his collarbone in a spring training game. He missed a bunch of the season and pretty much took the rest of the year to get going. In '71 he nearly doubled his win total and he then remained in the rotation through '74, when he won 10 and improved his ERA by a run. In '75 he was off to a so-so start when he was traded to the Cards for Ray Sadecki and Elias Sosa. In St. Louis he improved things markedly, winning nine the rest of the way and losing a run off his ERA. Following the season he was traded to the Phillies for outfielder Mike Anderson.

When he got to Philadelphia, Reed was told he would be moving to the bullpen, about which he initially wasn't too happy. But he settled in nicely to the team's effective bullpen by committee and became a significant producer the next eight seasons, averaging around 60 games, over 100 innings, and double figures in saves each year. He also improved his ERA significantly and right away experienced an almost annual return to the post-season. He went 57-38 in Philly and won 13 in '79 and finally won a ring in '80 when he pitched shutout ball in the Series. After the '83 season he was traded to the White Sox for Jerry Koosman, the guy he faced in his first post-season game back in '69. After a pretty good year for Chicago - 0-6 but with 12 saves and a 3.06 ERA - he was released the following spring and retired. He finished with a record of 146-140 with a 3.46 ERA, 55 complete games, eight shutouts, and 103 saves. He is one of very few pitchers to win and save over 100 games. In the post-season he went 0-2 with a 5.06 ERA and a save in 22 games. He could also be a pretty good hitter, batting .217 during his years in Philly.

I have read conflicting accounts of what Reed has done since playing. One has said that he returned to Indiana and taught there for many years. Another that he moved back to the Atlanta area to work in finance. One thing for sure is that since the late Nineties he has been associated with a company called Team MVP, whose site I link to here. 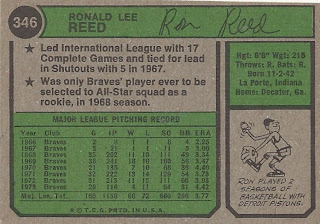 Ron gets a couple good early-career star bullets. He was pretty much a success right off the bat in baseball which led him to quit hoops. With the Pistons he averaged eight points and 6.5 rebounds per game in his two seasons as the sixth or seventh man.

We can use North's only LA season to hook up these guys: