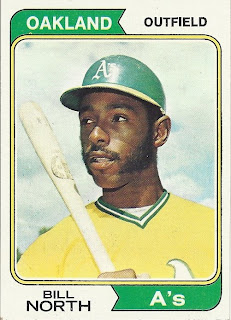 Now these are some serious muttonchops. And this was a serious guy. Bill North had such an up and down season in '73 that it is small wonder he had some incidents the following year. Traded from the Cubs following the '72 season - a trade about which he was initially dejected - Bill went straight into the Oakland lineup, initially as DH, and then as the regular center fielder, a position that had Reggie Jackson putting in the most time the prior season as the development of Angel Mangual pretty much stalled. Bill hit the ground running. And fighting, as in his first game hitting against Doug Bird he punched the Royal pitcher in the face as revenge for getting hit twice in a minor league game back in '70. His average and his spot in the lineup moved all over the place but he could get on base - he would post a .376 OBA that year - and he did love to run. He had 53 stolen bases by mid-September when he twisted his ankle stepping on first base. He wound up losing the stolen base title by one to Tommy Harper and then missing the whole post-season. And then Charlie O wouldn't even let him sit in the dugout during the Series. Shades of Reggie's Series experience the prior year. But even though their experiences were parallel, Bill and Reggie WOULD cross each other in '74.

Bill North grew up in Seattle where he was admittedly not a great baseball player. In high school he played primarily second and his senior year, hitting .364, made third team all-Metro, which he said was like kissing your sister. He was still small back then and he would then move on to Central Washington State College where he was a point guard and an infielder/ outfielder. His sophomore season he hit .455 and that was upped to .476 his junior year when he was all-NAIA first team. That spring of '69 he was drafted by the Cubs in the 12th round and in Rookie ball that year would play exclusively outfield. As would be characteristic he had a nice OBA number and he split '70 between A ball where he hit well and Double A where he didn't. He fixed that the following year when he hit .291 with a .394 OBA and then hit well in a few games in Chicago. That winter he learned to switch hit and then had a great spring training in '72 and was set to play center field. But then the Cubs acquired Rick Monday - ironically creating the hole for Oakland in center Bill would fill in a year - and that coupled with sliding into Leo Durocher's doghouse led to limited time in the field and a demotion to Triple A. There Bill hit silly good with a .351 average and a .431 OBA and so was pulled back to Chicago. Later that season after Whitey Lockman became manager Bill assumed a regular job in the outfield backing up center and right. After the season he was traded to the A's for Bob Locker.

After North's coming out season for Oakland he got healthy for '74. He started stealing bases right off the bat but his hitting was light. A bit of a ball-buster in the locker room that June he was giving Reggie some noise when Reggie objected enough that the two were ultimately rolling around on the floor. Reggie hurt his shoulder a bit and missed a couple games but the real damage was to Ray Fosse who hurt his neck breaking up the fight and missed a significant part of the rest of the season. But the fight helped turn around North's year and he hit significantly better the rest of the way, finishing with a .260 average. He also won the stolen base title with 54 and saw his first post-season action. He didn't hit terribly well but Oakland won its third title anyway. In '75 he improved across the board offensively except for a big drop in stolen bases due to bone spurs in his feet. In '76 his feet were healthy again and he led the AL in stolen bases with 75. He also led in being caught with 29, which brings up the knock on him that he didn't have a great ratio. His response to that was that usually Bert Campaneris hit behind him and Bert wasn't too fond of taking pitches when Bill was running. He actually would swing away a bunch not only leading to Bill getting caught but also missing a bunch of steals due to balls being fouled off. Then in '77 after just about every integral part of the team left via free agency so the offense took a dive. Bill also suffered hand and foot injuries and the season was pretty much a wash. Then a few games into '78 after he had played very little he was traded to the Dodgers for future Billy Martin favorite Glenn Burke.

When North moved to LA he got the starting center field gig and resuscitated his season, hitting only .234 but with a .371 OBA and 27 stolen bases in about half a year. He also returned to the post-season, a feat that eluded most of his ex-Oakland teammates. In '79 he moved to the Giants as a free agent where he stole 58 his first season and 45 his second as the team's regular center fielder. While he got along with his first two managers Joe Altobelli and Dave Bristol, he didn't hit it off with his third, Frank Robinson, who took over in '81. That year Bill moved behind Jerry Martin in center and the following season was not offered a contract. He was done at age 33 and finished with a .261 average, 395 stolen bases, and a .365 OBA. Bill was also excellent defensively and led the AL twice in putouts and once in assists. He also killed in various range factors and is highly ranked career-wise in all those categories. In the post-season he had a tough time, hitting .051 with a couple steals in 20 games.

After playing North pretty much turned his back on baseball and became a financial planner first in the San Francisco area and then back near his hometown, in Kirkland, Washington. 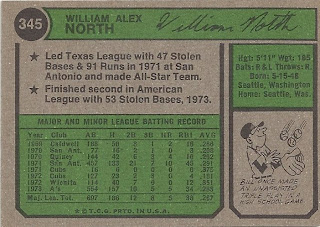 Bill's star bullets were discussed above. He also had an unassisted double play in the minors when he caught a fly in short center and ran down the runner who was trying to return to second. He had some serious wheels. He also has a bio on the SABR site that is very informative. It is linked to here.

Since I missed a week due to vacation there is a bunch of music news to recap. Let's start with '73. On March 3, Slade hit Number One on the UK charts with "Cum On Feel the Noize" which would later be a big hit for Quiet Riot. The original version was produced by Chas Chandler, the former Animals bassist who discovered Jimi Hendrix. On the same date that year the Grammys were held. George Harrison's "The Concert for Bangladesh" won Album of the Year. On March 7, Bruce Springsteen had a performance at Max's Kansas City in the Village at which the guy that signed him to Columbia records, John Hammond, had a heart attack. Hammond later said he got too excited from the show for his own good. Then on the 9th Ron "Pigpen" McKernan, keyboardist for The Grateful Dead, died of alcohol poisoning at age 27.

In '74 on March 1 Queen kicked off its first ever headlining tour to support its new album "Queen 2." On the 2nd were that year's Grammys and Stevie Wonder had a field day with his "Innervisions" capturing Album of the Year and a couple singles, "Living For the City" and "Superstitious" won awards as well. Record of the Year went to Roberta Flack for the second year in a row. She followed up "Killing Me Softly With His Song" with "The First Time Ever I Saw Your Face." They really liked long titles back then. On that date also the proto-punk band Television made its NYC debut. The group would later go on to be the first house band of the iconic club CBGB's. Lastly on the same date Terry Jacks hit Number One in the US with "Seasons in the Sun," setting popular music back a notch. On March 9, the new Number One in the UK was by Alvin Stardust and called "Jealous Mind." Definitely a must-see video, Stardust looks like a thin Elvis stuffed into a rubber suit who sings in falsetto. Also on that side of the pond the band Bad Company made its debut.

Back to baseball for the hook-up. Billy and Mike were neighbors for years: