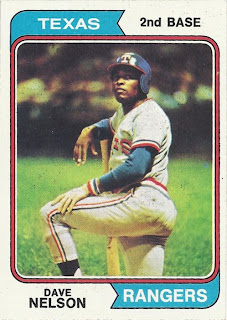 Dave Nelson brings us back to the action shots as he looks heavenward in the on-deck circle in what may be Oakland. Dave had a pretty nice season in '73. He hit around .300 in the first half of the season even though he was fighting for playing time with five other guys at third including a rookie named Bill Madlock. Later in the season he pretty much took over second and would accumulate 43 stolen bases as well as his first and only All-Star appearance. It would be his best season as an ankle injury would restrict him a bit in the big turnaround by the Rangers in '74.

Dave Nelson was born on an army base at Fort Sill, Oklahoma. His dad was a sergeant and Dave moved around pretty much as a kid, finally settling in Gardena, California where he was a baseball and track - 9.7 in the 100-yard dash - star. After graduating he stayed local and attended Compton Junior College where he was an All-American JUCO player. In '64 he was drafted by the Indians where he immediately established himself as a base-stealing second baseman, posting decent averages while advancing through the system. He stole 58 bases and 41 bases his first two seasons in A ball, 59 in '66 in Double A, and 30 in Triple A in '67 when he missed some time due to an injury. Dave was a bit more suspect on defense, having an understandably good range but also high error totals. In his off-seasons back then he continued his education at California State College, eventually earning a degree in sociology which he used in his other off-season activity, working with inner-city kids.

In '68 Nelson came up to Cleveland and got enough time in at second and shortstop to steal 23 bases and get a nod for the Topps Rookie Team that year which he split with Ken Boswell of the Mets. In '69 his average took a tumble as he was again one of four guys to get serious starting time at second. Following the season he was traded to the Senators with Horacio Pina in a pretty good deal for the Nats since the two guys they lost barely played up top. Dave spent a significant amount of the next two seasons at Triple A Denver where he hit .369 and .307 respectively while putting in far more time at third. His average up top wasn't too hot the first year but in '71 he was eventually able to wrangle the third base gig from flop Joe Foy and did a nice job offensively, also stealing 17 bases in half a season. That got him an uncontested shot at third in '72 where he got some props from manager Ted Williams. His average took a hit as the team hit a new low offensively but his speed sure didn't as he stole 51 bases to narrowly miss leading the league. After his big '73 season he was again slated to take over second as a perfect Billy Martin-type player. But early in the '74 season he hurt his ankle, robbing him of his speed and pulling his average down 50 points. Things didn't get better in '75 as he re-injured the ankle and hit .213 in only 80 at bats. Before the '76 season he was traded to the Royals for Nelson Briles. With KC Dave did back-up work at second and DH the next two seasons before being released during spring training in '78. That finished up his playing career and he exited with a .244 average, 340 runs and 187 stolen bases. He went o-fer in his only at bat in the post-season.

Nelson wasted little time in reviving his baseball career once his playing days were over. By 1980 he was coaching for TCU and he then joined the White Sox staff from '81 to '84. In '85 he was a roving minor league coach for the Sox then moved to director of instruction for the A's ('86-'87), color commentator for the Cubs ('88-'89), and minor league instructor for the Expos ('90-'91). He then returned to Cleveland for the rest of the Nineties, first on the admin side ('92-'97) and then back in the booth ('98-'99). He then hooked up with the Brewers, again making the rounds from admin (2000-'02), coaching ('03-'06), and broadcasting ('07-present). He is also still using his sociology degree, being actively involved in a foundation he co-founded that helps kids whose parents have AIDS in South Africa. Dave's card back gives us the dirt on his stolen bases and - surprisingly - his defense in the minors. His cartoon refers to his time in the minors with Cleveland when he picked up switch hitting but then dropped it around 1970 when it wasn't doing anything good for his average.

Dave gets to partake in the double exercise as well. First for Whitey Lockman as a manager:

Then for Whitey as a player: