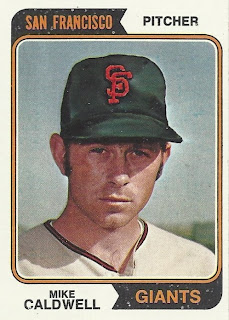 Continuing the recent theme of award winners we come to this happy guy. Why does Mike Caldwell look so glum? Is it because of the terrible air-brush job on his card? My bet is that his expression is the standard one that results from two-plus years of pitching for the worst team in baseball. Mike revives the non-Traded traded card posts at what may be Shea. He'd been a Padre for the '73 season but after it was traded to the Giants for Hall of Famer Willie McCovey and outfielder Bernie Williams (NOT the guy who would play for the Yankees or any relation to him). That can be tough to be traded for an icon. Just ask Charlie Williams. Mike had what might generally be called an interesting year in '73. The closest thing the Padres had to a closer, he put up generally good numbers and added ten saves but his record was pretty discouraging. But pretty soon things would improve and down the road they'd get a LOT better.

Mike Caldwell was a pitching star in North Carolina and was a key piece sought after by the new North Carolina State baseball coach in '67. He was able to get Mike and another local star Chris Cammack to Raleigh where his two stars got NC State their first and only College World Series appearance their freshman year. Both Chris and Mike would get conference honors as they would do a couple times later in their college careers. Mike finished with a 32-10 college record and was drafted the June of his senior year by the Padres. He then had a whirlwind minor league career going 6-1 in two Single A spots that summer before getting called up to his first game in September where he didn't give up a run in six games. He then spent '72 and '73 moving between the pen and the rotation as one of San Diego's more reliable pitchers. After a combined record of 12-25, though, he was probably ready for the change and up to San Francisco he went.

In '74 Caldwell had about as complete a turnaround as one can get when he reversed his '73 record going 14-5 with a 2.95 ERA. Mike, who was a groundball pitcher, benefited by having a better infield behind him but it was short-lived as in '75 and '76 nagging injuries contributed to a combined record of 8-20 and a 4.82 ERA and a return to the pen. And a departure from the left coast. First he joined Dave Rader and John D'Acquisto on a trade to St. Louis for Vic Harris, John Curtis, and Willie Caldwell. Then before spring training ended he was sent to Cincinnati for Pat Darcy. Then in June of '77 after getting in 24 relief innings for the Reds with zero decisions and one save came the trade that counted: Mike went to the Brewers for two minor leaguers.

For the rest of '77 Caldwell posted some wildly pedestrian numbers but did manage to sneak his way back into a rotation. Then in '78 Mike became the Yin to the Yang of Bambi's Bangers. He was super stingy in giving up hits and walks and levered the much better Brewers offense into a 22-9 record and a 2.36 ERA and probably would have won the Cy if not for Ron Guidry's amazing season. What he did win was the AL Comeback Player of the Year and endearment to the Milwaukee fans. Mike wouldn't match those numbers again but he did pretty well the next four years, going a combined 57-39 with about a league-average ERA, including a 17-win season in '82 when the Brewers went to the Series. He had an awfully good Series against St. Louis, going 2-0 with a 2.04 ERA, though he came out on the losing end. In '83 he won 12 although the ERA popped half a run and in '84 as the Brew Crew was running out of gas he went 6-13 in his final season. Mike finished with a record of 137-130 with a 3.81 ERA, 98 complete games, and 23 shutouts. He went 2-2 with a 4.03 ERA in six post-season games.

After playing Caldwell returned to North Carolina where he eventually became pitching coach of Campbell University after Cal Koonce, keeping that gig from '87 to '91. He then moved back to the Brewers system, where he was a coach from '93 to 2001. After a year as a manager - he went 60-80 - he moved to the Detroit system from '05-'06 and then to the Giants one from '07 to the present. He is currently the pitching coach of the AZL Giants in Scottsdale. 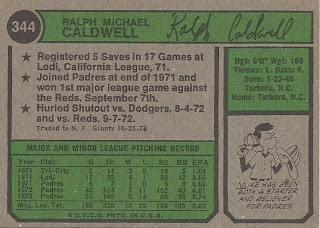 We get the tiny print back, a few decent early-career star bullets, and an informative cartoon. But the thing that sticks out is the signature. Mike signs with his given name Ralph. I think he made the right choice going with Mike.

This will be a quick hook-up: