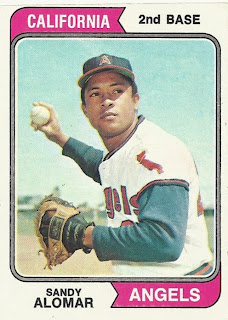 I always liked this card because the faded colors made it look like Sandy Alomar was playing ball somewhere on a beach. Where he actually is I can't quite tell but I am pretty sure he's the first guy in the set who prominently has a batting glove on under his mitt. He is also the second guy in this set - after Bob Boone - to have two sons have significant MLB careers after him. '73 was a bit of a tough year for Sandy. His consecutive-game streak ended in May at 640 games and he let a shallow fly drop for a hit in August that would turn out to be the only one in Nolan Ryan's third attempt at a no-hitter for the season. But The Iron Pony was a happy guy - just check his '75 card - and he rebounded after his '74 trade to the Yankees.

Sandy Alomar was discovered playing ball in Puerto Rico when he was 16 by a Braves scout and signed on the spot for $10,000, a pretty good bonus in 1960 for Latin players. His brothers all played pro ball in PR but Sandy left for the States that year and played some D ball. He would return home in off-seasons to play winter ball. In '61 he returned to D ball and hit .278 as an error-prone shortstop. In '62 he moved up to C ball, hitting .329 and then to Double A the next year where he hit .292. The error totals stayed fat however, and in '64 he lost some points off his average as he concentrated on his fielding after being moved up to Triple A. It worked as he dropped his error totals by a third and continued to do so when he was called up to Milwaukee the last month of the season. He started up top the next year but was sent back to Triple A when the team said he needed to work on his hitting, even though he had one of the best averages at the time for NL shortstops. The rest of that season and '66 he stayed at that level where he hit .243 both seasons. That second year he began playing more at second where he was less error-prone than at short (most of his errors were throwing ones). At the end of the season he was traded to the Astros and then the Mets in the trade that brought Eddie Matthews to the former team. He then bottomed out offensively for NY in Triple A, hitting .209 and in August he was sent to the White Sox with former MVP Ken Boyer for Billy Southworth. Finally for Chicago he stuck in the majors even though he didn't see too much action the rest of the season.

In '68 Alomar became the primary second baseman for the Sox. He'd learned to switch hit during minor and winter ball the previous year and his new talent was able to get him a home in the lineup. He kicked off '69 in the same role and that May was traded to the Angels for Bobby Knoop, the guy he would replace at second base in California. Initially the trade was unpopular but Sandy, who was five years younger than Knoop, won over fans with his speed and his better average and didn't miss a game the rest of the season. In '70 he improved most of his numbers and stole 35 bases in an All-Star season. Then in '71 he stole 39 and put up the best offensive numbers of his career while leading the AL in assists. In '72 he had a bang-up start and was hitting .300 in late June with his streak very much alive even though he'd suffered shoulder, knee, and ankle injuries. He faded down the stretch as some of those caught up to him. '73 would be his last regular year in Anaheim as the next year he gave way to newly-acquired Denny Doyle. That July he was sold to the Yankees where he took over the regular gig and stabilized second after the mess there that succeeded the trade of Horace Clarke to San Diego. He hit .269 the rest of the way and continued as the regular guy in '75. In '76 he backed up rookie Willie Randolph and got his first post-season action. That off-season he was traded to the Rangers for Brian Doyle and Greg Pryor and the next two seasons would back up the infield. He was released following the '78 season. Sandy batted .245 with 558 runs and 227 stolen bases. He went hitless in his only playoff at bat. Defensively he is in the top 100 all-time for putouts and double plays at second. 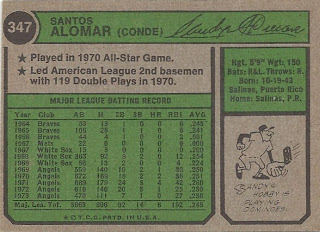 Sandy's star bullets focus on his '70 season. Dominoes is pretty much a national pastime in Puerto Rico, as it is in my old neighborhood of Upper West Side NYC.

Sandy and Ron Reed were nearly a foot apart in height but we can get them closer than that here: