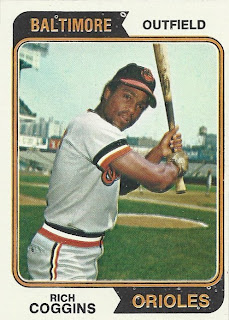 Sometimes things happen in bunches in this set and this is one of those times. Like the subject of the last post, Rich Coggins spent some time in Montreal, although he wasn't nearly as successful as Bill Stoneman was there. Like Dwight Evans from two posts back, this card represents Rich's first solo one from Topps. And like Dan Driessen from a few posts ago, Rich is a member of the Topps Rookie All-Star Team for '73. That after a gap of over 100 cards. Rich was an interesting choice for this designation since his fellow outfielder Al Bumbry was AL Rookie of the Year and got left off the Topps team. At least Rich kept the award in the O's family. So '73 was obviously a pretty good year for this kid. On top of other achievements visible on the stats line he also stole 17 bases and set an Oriole rookie record - later tied - by hitting in 15 straight games. He sported a .363 OBA and went on to hit over .400 against Oakland in the playoffs. Rich was on a pretty good roll but it wouldn't last too long. Here he demonstrates his fondness for pine tar at Yankee Stadium.

Rich Coggins was born in Indianapolis and had a pretty itinerant high school career, attending three on the way to graduating from Garey High in Pomona, California in '68. That year he was drafted by the Orioles in the 21st round and started off that summer in A ball where he hit pretty well at the top of the order. In the minors he was primarily a center fielder. There is some literature indicating that he attended Mt. San Antonio College - the same school at which Bill Stoneman kicked off his college career - at around this time but if he did he sure didn't play ball there. What he DID do in '69 was steal a total of 30 bases on two Single A and one Double A team. Then in '70 he boosted his average 75 points at the higher level to get promoted to Triple A the last third of the season. He lost none of his juice at the higher level and in '71 he had a big year with 20 homers and 107 runs in the top spot. Then in '72 he pulled his average up 40 points and by the end of the season he was in Baltimore.

For the Orioles in late '72 Coggins got off to a pretty hot start, filling in for injured Merv Rettenmund and showing off his speed. He finished with a .333 average in limited appearances - he got hurt - and the next season returned for his big rookie year. He split time in right with Rettenmund as part of Earl Weaver's platoon system and also played a bunch in center. In '74 both he and Bumbry had sophomore jinx seasons and Rich lost about 75 points off his average although he did steal 26 bases. Then after a poor playoff series against the A's he was sent to the Expos with Dave McNally and Bill Kirkpatrick for Mike Torrez and Ken Singleton.

The trade that sent Coggins to Montreal has long been regarded as one of the worst ever. Singleton went on to have an All-Star career with Baltimore and Torrez won 20 in his only full season with the O's. In the meantime Kirkpatrick never made it out of the minors, McNally retired after a poor start, and Rich went down with a weird thyroid ailment that spring, requiring hospitalization for liver and kidney damage. When he returned in early June he hit .270 in a few games but the Expos, possibly looking to put the horrible trade behind them, sold him to the Yankees before the month was over. New York had problems of its own with incumbent right fielder Lou Piniella having a tough time coming back from his own injury and Rich was acquired as insurance and to add a bit more speed to the lineup. He hit .224 the rest of the way, actually playing a bunch more in center than in right, but with only three stolen bases in over 100 at bats he wasn't exactly the runner the club had anticipated. Early in the '76 season after some token at bats he and Ken Brett were sent to the White Sox for Carlos May, another former Topps Rookie Team member. In Chicago Rich got more time but only hit .156 and in July he went to the Philles for Wayne Nordhagen. For them Rich went down to Triple A where he hit .252 with a .330 OBA, good enough to get called up that September. But he refused to report to the Phillies and after the season was disqualified. At age 25 he was done in baseball. Rich had a .265 average with 50 stolen bases. In the post-season he hit .200 in five games.

And that's it. There is zero out there on what Coggins did after baseball. There is a truck driver in South Carolina with the same full name but there is no way to tell if it is the same guy. 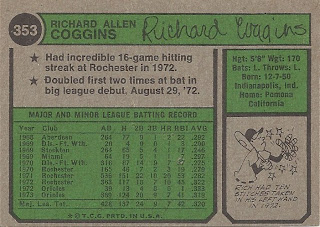 Now Topps has some interesting commentary in Rich's star bullets. In the first one the word "incredible" is employed about a pretty prosaic achievement. I'd have loved to have a 16-game hitting streak at any baseball level but I would think if they opted for that word it should have at least been used for his streak in '73. 15 games at the MLB level is a lot more impressive than 16 in Triple A. Those two doubles were emblematic of his start as he posted four that year in only 39 at bats. The hand injury is what took him out of action late that season.

So we have two Expos who were a couple years apart. No problem: