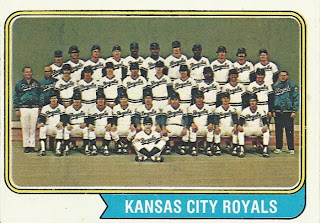 While this is one of the most banal team photos in the set - it looks like there is no natural light and all the background is roughly the same tone - it is one of the easier ones in which to make out just about everybody. I'd have loved to see that big logo in the background but that's just me probably. But somehow a pose a bit more dramatic would have been appropriate for this team that during the '73 season gave the A's fits more than any other division contender. KC back then had done a nice job in establishing itself, finishing as high as second place in only its third season. In '73 they were settling in as they began filling the outfield gaps around Amos Otis with quality guys, had one of the league's better middle infield combos, and were seeing solid power out of John Mayberry at first. Add to that solid starting pitching and healthy egos and you get contender. They had a streaky season, putting up wins and losses in bunches, but generally resided in either second or third and no more than four games back all the way through the break. They pulled up Kurt Bevacqua and he provided a hot hand as right after the All-Star game they went on a 14-3 tear to go into first, capitalizing on Catfish's injury during the game. They were able to stay in first until August 16th and then the pitchers hit a wall - Paul Splittorf needed eight shots to get win number 16 - and Oakland surged ahead. In the end the Royals finished six back. The missing piece turned out to be the young third baseman who put in a few games that year and would lead them to three straight division titles in a few years and a Series win in the Eighties. 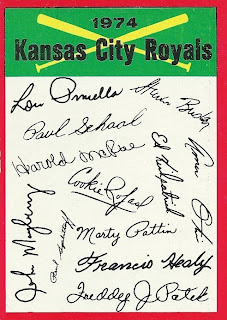 The checklist front does a nice job of showcasing just about all the major guys on the team. I think Freddy Patek's signature has the most flair and all the signers except Marty Pattin were actually on the roster in '73 which has been pretty rare. 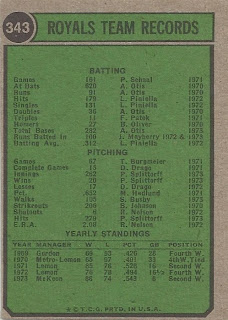 Since the Royals are a relatively new team - one of four franchises that began play in '69 - we get all the team's records through '73. There is only one player on the record board without a card in this set so let's get to him.

Mike Hedlund came out of Arlington, Texas - future home of the Rangers - where he was signed in '64 by the Indians for a $20,000 bonus. I have read that he was a bonus baby but that seems incorrect given the size of the bonus. He began his career in '64 with a short season in Class A and then spent all of '65 on the Indians roster, getting into six innings with at least one trip to the DL. He may have spent the year there to avoid the first year draft which is where the bonus baby supposition may have originated. At any rate in '66 he was back in the minors and after an OK season at Double A that year he had two much better seasons - 7-8 with a 2.56 ERA and 8-13 with a 2.30 ERA - in '67 and '68. In the latter year he got a couple innings up top and that winter he was selected by the Royals in the expansion draft. He split KC's initial season between the pen and the rotation, going 3-6 with a 3.24 ERA and a couple saves. That winter he played ball in Venezuela and pitched super but contracted a virus that killed his season up top but allowed him to post good numbers recuperating in Triple A: 9-2 with a 3.37 ERA. In '71 he got healthy and went 15-8 with a 2.71 ERA. But he then got off to a slow start in '72 and eventually lost his spot in the rotation going 5-7 with an ERA that climbed a couple runs. He then was traded back to Cleveland for Kurt Bevacqua. After a year for the Indians in Triple A he was traded to the White Sox for Ken Hottman and after a much better year for them at the same level he went to the Reds for that Ozzie Osborn guy. He put a couple of nice spring training innings in but was then released, ending his career. He went 25-24 up top with a 3.56 ERA, nine complete games, and two saves. In the minors he was 43-54 with a 3.32 ERA. He returned to Texas in '75 and was VP of Human Resources at Texas Trust Credit Union for 35 years. He has since retired and lives in Arlington. There is a nice blog about him at this spot where the man himself actually chimes in. 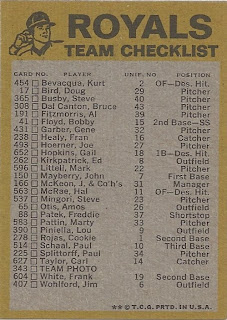 Let's see how Topps does getting all the key KC guys a card. On the position side we miss Steve Hovley and his 232 at bats and .254 average who most people know from his eccentricities in "Ball Four." Rick Reichardt also gets omitted in his final season. He had 127 at bats and hit .220. George Brett had 40 at bats that year but won't have a rookie card. On the pitching side we miss Dick Drago who has one of those non-Traded traded cards with Boston. Guys with decisions but without cards include Ken Wright who went 6-5 with a 4.91 ERA in 25 games and Wayne Simpson who was 3-4 with a 5.73 ERA in 16 games. Both Ken and Wayne moved between the pen and the rotation. 360 at bats and 18 decisions puts the Royals around the top of both lists for missing contributors. In the team photo Simpson is the middle guy in the back row to the left of Fran Healy, Wright is the burly guy five in from the right in the second row. I see Jerry May in the photo which means it's taken early in the season so if Reichardt is anywhere it will be with the White Sox. And I don't see Hovley.

The Phillies will help a bunch with this hookup: