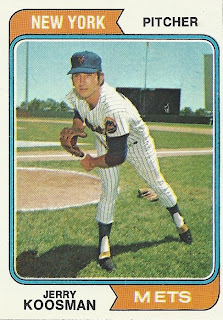 Jerry Koosman is another Met who had a roller-coaster ride of a season in '73. Jerry began the year by going 5-0 with a 1.79 ERA and was a big reason the Mets were able to play .500 ball with zero hitting. Then came a horrible 3-14 run that lasted through mid-August and the team in sixth place, nine games back. But from then on Jerry went on a 6-1 tear that included almost 32 straight shutout innings. Judging by his expression here, this photo was probably snapped at Shea during the bad middle streak. Maybe if he pitched from the mound instead of just off the on-deck circle he'd have done better. From wherever he pitched he would go on to have a pretty good post-season and in the end nearly win the whole thing.

Jerry Koosman was a farm boy from Minnesota who took a long road to the majors. A pitcher since a young kid he was playing semi-pro ball while still in high school. He then briefly attended the University of Minnesota but left when he realized the school didn't have a baseball team and transferred to a school in North Dakota called the State School of Science. At both schools he worked toward a degree in engineering. Then before the season began he was drafted into the Army in '62 and was stuck on a stateside base the next two years. When he got a chance to play on an Army team he was spotted by a Mets scout and signed with them in late '64. He had a big fastball and his first season in '65, split between A and Double A, he fanned over a batter an inning but otherwise went 5-11 with a high ERA. Prior to the '66 season he was taught a slider which he picked up fast and back in A ball that year he went 12-7 with a 1.38 ERA and again over a strikeout an inning. In '67 he moved back up to Double A, went 11-10 with a 2.43 ERA, and got in a couple games in NY with less than impressive results.

Koosman kicked off the '68 season by getting a Topps rookie card on which he was pictured with Nolan Ryan. I have not checked but I have to believe that the pair's 544 career wins are the most represented on a rookie card ever. The card would be a good omen for Jerry as his 19 wins and 2.08 ERA got him a spot on the All-Star roster and named TSN Rookie Pitcher of the Year. The next season was pretty much just as good and was punctuated by an excellent Series in which he won both starts. In '70 he missed a few starts after getting whacked in the face with a line drive but still had a nice record and in '71 a back muscle tear put him on the DL for a while also. In the '72 season the loss of manager Gil Hodges hit Jerry hard and he needed to spend some time in the pen to get his rhythm back. Then after his up-and-down '73 he won 15 for a pretty poor team and 14 the next year, both seasons posting very good ERAs. Then in '76 he had maybe his best season, going 21-10 with 200 strikeouts and a 2.69 ERA, finishing second in NL Cy Young voting to San Diego's Randy Jones. But then things hit the skids. Fast, the Mets got horrible, and though Jerry would post a pretty good ERA the next two years his combined record over that time was 11-35. After the '78 season he went to the Twins for Greg Fields and Jesse Orosco. He was the last player traded away from the '69 Series team (Ed Kranepool would retire the following year).

Shortly after Koosman retired he founded an organization called America's Best that was intended to represent young baseball players but was never given authorization by MLB, which was to be the group's selling point. When that failed he became more active at an engineering company in which he bought a stake while playing, Mesa Technologies. Eventually he bought out a bunch of other investors and moved the company to Wisconsin. He has remained affiliated with the firm ever since and worked there through 2008, except for parts of 1991 and '92 when he did some pitching coach work for the Mets organization. In 2009 shortly after appearing at Citi Field for a '69 reunion he served six months for tax evasion after he got caught up in the big anti-tax movement that also nailed actor Wesley Snipes. 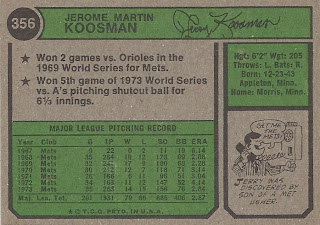 Jerry gets some props for his Series work in his star bullets. Regarding the cartoon, his catcher in service ball was a Queens native whose dad was head usher at Shea. The dad had a good relationship with Mets management and turned them on to Jerry. When a scout went down to see him they offered him $4,000 on the spot. Jerry shot the guy down after his friends told him to hold out for more money. The Mets ended up signing him for about $1,900. That experience should have kept him away from the advice of those anti-tax guys.

This one uses an ex-Pirate to help: