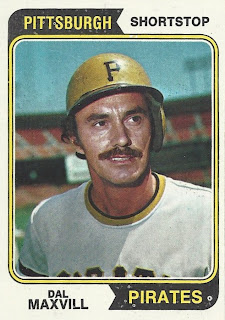 I liked Dal Maxvill. I really did. But in this photo with that big 'stache on his skinny body he looks like an adult film star. I guess that was part of the look back then but most guys in this set with facial hair look pretty good. Dal just looks creepy. I guess he was allowed. Carrying a .215 average throughout your career couldn't have been easy so if growing a bush on your face helped, why not. In '73 after being in and around St. Louis his whole baseball career he continued his recent itinerant ways, going to Pittsburgh early in the season after it was apparent Dick Green WOULDN'T retire (this time) and the Pirates were in need of a stopgap after Gene Alley ran out of juice a bit earlier than expected. Dal had some pretty good cards in his career - especially his '71 action shot - but this wasn't one of them. That's a shame because it's his last one.

Dal Maxvill grew up in Granite City, Illinois, across the river from St. Louis. A defensive whiz at shortstop in high school, he continued playing ball at Washington University where he graduated in four years with a .301 career average and a degree in electrical engineering. Signed by the Cards in '60 he hit .257 that summer in C ball. He split the next season between C and Triple A - quite a jump - where the average came in but not hugely so. In '62 he was hitting .348 (!) in Double A and showing good power - 35 RBI's in 178 at bats - when he was called up to St. Louis. There he got a serious look as Julio Gotay's back-up and did pretty well in the field. Then in '63 St. Louis acquired All-Star shortstop Dick Groat and Dal barely played. Same deal in '64 and for a big part of the season he was back in Triple A where he hit .235 for a couple teams. But late in the year second baseman Julian Javier got hurt and Dal came up to take his place including in all seven Series games. In '65 it was back to the bench.

In '66 Groat was traded to the Phillies and Maxvill got his shot at a regular gig. Luckily for him he would go on a relative offensive tear the next three seasons - hitting about .241 - while his defense was awfully good. In '68 he won a Gold Glove. Twice he returned to the Series, winning in '67 and posting an 0 for 22 in '68 as the worst offensive display in Series ball ever. But for Dal it was just a portent of things to come as he had two of the worst offensive seasons ever the next two years. He pulled the average up the following two seasons as the regular guy and late in August '72 he was sent to Oakland for two minor leaguers. One thing Dal did have was a knack for getting in the post-season and in '72 he filled in at short in the AL playoffs after Bert Campaneris got tossed for throwing a bat at the mound. After going to the Pirates in '73 he did a turnaround as he was picked up off waivers by Oakland in '74 and saw action in both the playoffs and the Series. After sticking with Oakland as a coach during the '75 season he was reactivated for a few games to plug some infield holes. That was his last bit as a player. Though he finished with a .217 average, he is 48th all-time in fielding percentage at short. Plus he has four rings as a player. I'd probably take that trade.

After his career ended Dal did a few things. While playing he worked off-season both for a firm called Bussman Fuse in St. Louis where he plied his engineering degree and then at Cardinal Travel, a travel agency he founded with reliever Joe Hoerner. He kept his hand in the latter business forever. In baseball he coached a season in the Oakland system and then in '78 worked up top for the Mets. He then moved to St. Louis from '79 to '80 before moving to the Braves system the following year. From '82 to '84 he coached in Atlanta. In '85 he took over as Cards GM. He had some pretty good initial success, going to the Series that year and in '87 but after a pretty dry spell he was replaced in '94. He then scouted for a couple seasons for the Yankees. Since the late Nineties his principal vocation has been the agency. 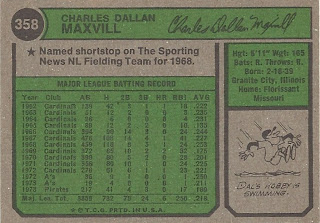 There's the Gold Glove year in the star bullet. He has a pretty cool middle name and home city.

Lots of music news to catch up on because I've been running behind. Let's start with '73. March 23 was the day the INS told John Lennon he had to vacate NYC in 60 days. Nobody knew yet that Lennon was on Nixon's hit list which was behind the demand. On the 24th, Lou Reed got bit on the butt by a guy while performing in Buffalo on a tour stop to promote his "Transformer" album (the one with "Walk on the Wild Side"). On the same date in the States the O'Jays' Love Train took over the top spot. On the 29th Dr. Hook and the Medicine Show made the cover of Rolling Stone. That was a big deal because their most recent hit was "The Cover of Rolling Stone."

In '74 on March 23rd, Cher's "Dark Lady" hit Number One in the US. On the 26th the song "Then Came You" was cut in Philly by Dionne Warwicke and The Spinners. She wasn't a big fan of the song and had to apologize to the producer when it became a big hit. On the 28th Arthur "Big Boy" Crudup passed away at age 68. Big Boy wrote "That's All Right" and "My Baby Left Me" which were later big hits for Elvis. Like a lot of blues singers from his day he lived and died in poverty.

The St. Louis link for these two guys should work pretty good: