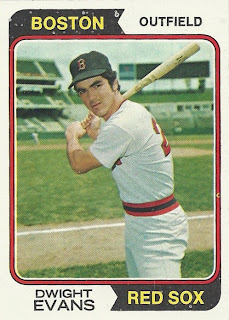 Back in the AL we move from an older vet to a younger kid. This is Dwight's first solo card and he poses in Oakland during his first year as a regular in the Boston outfield. While his offensive display in '73 wouldn't get him on anyone's radar, Dwight was already building a reputation as an outstanding fielder in the tough Fenway outfield. In a few seasons his offense would catch up and by the time he finished in Boston he would be revered nearly as much there as Bob Gibson was in St. Louis.

Dwight Evans was born in California and would return there as a kid in time to learn to play baseball. A small kid in high school he had to bust to make his varsity team and by his senior year he was league mvp and actively scouted. That summer he was signed by Boston in the fifth round of the '69 draft. An infielder/outfielder and pitcher in high school, he was exclusively an outfielder in pro ball and the next three summers gradually improved his hitting at various Single A spots. In '72 he was bumped up to Triple A where he turned on the ribbie power as he excelled under manager Darrell Johnson. By the end of the season he was in Boston for good, seeing some late-inning work and even some starts. In '73 he was given the starting right field job over a bunch of other young guys and he would hold onto it more-or-less for the next 17 years.

In '74 Evans boosted his average to .281 and more than doubled his RBI totals. In '75 he put up similar stats and after a not great playoff against Oakland had an excellent Series including a showman catch of a Joe Morgan hit that saved Game Six for the Sox until Carlton Fisk could win it long innings later. In '76 there was a bunch of pre-season noise about moving him to third base but the emergence of Butch Hobson and the offensive slowdown of Fred Lynn and Bernie Carbo kept Dwight in the outfield, where he won his first Gold Glove. In '77 he was having his best offensive season when he got hurt. The next three years saw him regularly top 20 homers a season, add two more Gold Gloves, and a first All-Star appearance in '78. Then in '81 began the second arc of his career as a legitimate substantial power hitter. That season he led the AL in homers and walks and put up his first .400-plus OBA. From '82 to '89 during his healthy seasons - he got hurt in '83 and missed about 30 games - he would average 28 homers, 102 RBI's, over 100 walks, and about a .390 OBA. During that time he won four more Gold Gloves and in '87, probably his best season - .305 with 34 homers, 123 RBI's, and a .417 OBA - he won a Silver Slugger and another All-Star nod. He returned to the playoffs three more times with the Sox, reaching the Series again in '86, again putting up great numbers. In 1990 his offense slowed down a notch as he played exclusively DH. After that season he left Boston as a free agent and signed for his final year with Baltimore. After hitting .270 in a bit over half a season with the Orioles back in the outfield he retired. Dwight finished with an average of .272 with 385 homers and 1,384 RBI's. He also had over 2,400 hits and a .370 OBA. In the post-season he hit .239 with four homers and 19 RBI's in 32 games. He did considerably better in Series play with a .300 average, three homers, 14 RBI's, and a .397 OBA in 14 games. He is surprisingly high in some lifetime stats including 49th in career extra base hits. Defensively he ranks among the top ten right fielders in putouts and assists.

After playing Evans coached in the White Sox system ('92-'93) before hooking up with the Rockies for whom he coached up top ('94). He then returned to the Red Sox, first as a roving coach ('96 -2001) and then as the hitting coach in Boston ('02). Since then he has worked for the Sox as a roving hitting coach at several minor league levels. 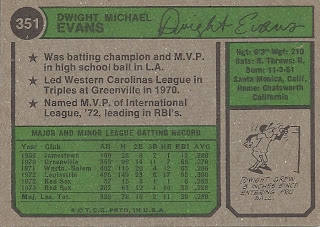 Dwight gets a few star bullets from his young career. The first bullet refers to his senior year ('69). He actually settled in at 6'2" and about 180 to 190 pounds so either Topps got some numbers wrong or Dwight went on a pretty serious diet.

No substantive music news and I'm too lazy to update the Watergate goings-on so let's keep it just baseball and do the hook-up. We use the same guy: