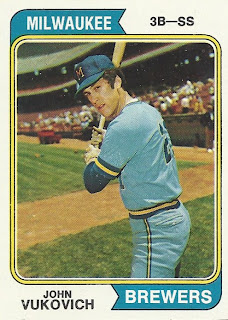 This is an interesting shot of John Vukovich on a sunny day in Oakland. It appears that everyone in the stands is looking towards the outfield and when I say everyone I mean the 70 or so people evident in yet another sparse A's crowd. Then there is that red thing along the first base line that appears to be a couch someone dropped on the field so Joe Rudi or Gene Tenace could get a rest. It's probably a service cart. John is in the midst of his first AL season, having come over from the Phillies in a big trade to help clean up the mess at third base for the Brewers. Unfortunately for him his teammate Don Money came over in the same trade and won the starting gig, leaving John to continue his role of perennial back-up guy. Here he shows his tough guy face. Maybe it's the same one he used when he hit his first major league homer in '73, one of his favorite career moments.

John Vukovich grew up in the Sacramento area and played youth baseball against future teammate Larry Bowa. In high school he was an infielder who excelled defensively, a trait he would continue throughout his career. When he graduated he went to American River College, a JUCO school from which he graduated with an Associates Degree in PE. He was drafted by the Phillies in '66 and that summer went to A ball where he played third base and led his league in fielding. He remained at that level the next two seasons, showing some pop with his bat as well. In '69 he moved up to Double A where he again won a fielding title. Then in '70 he had his big season at Triple A, turning into a power hitter while picking up another fielding crown. After a couple late-season games in Philly, he returned to Triple A to hit .308 and then was brought back up when Money was stumbling a bit at the plate. John wasn't exactly the answer offensively with his .166 average but he did field well. After then returning to Triple A for all of '72 he was sent to the Brewers with Money - and money - and pitcher Billy Champion for Ken Brett, Jim Lonborg, Ken Sanders, and Earl Stephenson.

In '74 Vukovich repeated his back-up work, posting time at second and short as well as third. He hit a bit better, with three homers and eleven RBI's in only 80 at bats. Following the season he was traded to the Reds for Pat Osburn. In Cincy he was opening day starter at third but that didn't last and he was returned to the minors as Pete Rose took over the position. Unfortunately that year John dragged his majors average with him - he hit .177 that season at Triple A - and in August he was sent back to the Phillies for Dave Schneck. While he got a few token at bats in Philly the next four years he spent the bulk of his time in Double and Triple A from '76 to '79. In '80 he returned full-time to Philadelphia where he was a late-inning defensive specialist and bench presence. He hit .161 in 62 at bats and while he was shut out of post-season play he did get a full share of the booty. After spending almost all of '81 on the bench he was released that August and was finished as a player. John hit .161 in 559 career at bats. He hit .259 with 1,050 career hits in the minors.

Vukovich had no problem finding employment after he played, joining old manager Dallas Green in Chicago as a Cubs coach from '82 to '87. He then returned to Philadelphia for the final time as a coach from '88 to 2004, the longest-tenured coach the team has ever had. In 2001 he had a triumphant battle with brain cancer. After the '04 season he moved to the admin side. In late '06 his cancer unfortunately returned and after a second battle he passed away from it in 2007. John was 59. 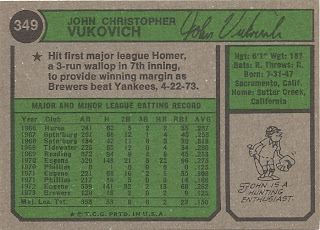 Vuk gets a star bullet for his big power display in April. He hit the homer off Sparky Lyle. He put his hunting skills to good use when he was a member of the Delaware National Guard while playing (no, he didn't shoot anyone).

Since John is a league-crosser this should be pretty short: