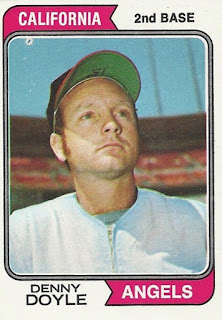 The Angels had a lot of air-brushed cards in ’74 and Denny Doyle is the latest one. Denny was traded to California months after the actual trade as he was the player named later in the Philadelphia acquisition of Billy Grabarkewitz. As it turned out, it was much later as Denny wasn’t the other named participant until December of a trade that occurred in August and so for a while he actually played with the guy for whom he was traded. Denny was a lefty hitter and he generally batted only against right-handers during his career so while he was pretty much the regular second baseman nearly all his whole time up, his at bats would fluctuate based on opposing pitchers. ’73 was yet another year that rolled that way as Denny split his time at second with Billy G, Cesar Tovar, and Terry Harmon, before missing the last couple weeks of the season with an injury. But he put up his best average to date during the season  and was a good enough fielder that for a while after it ended it was a toss-up as to whether he or new guy Dave Cash would be the starter for ’74. But Cash won, Denny got sent to the AL – the Phillies also got Aurelio Monteagudo for him – and in this photo at Candlestick it looks like he’s trying to figure out how the left coast will work out for him.

Denny Doyle was raised in the small town of Horse Cave, Kentucky, where in high school he was a point guard and as a pitcher and infielder improbably led his team to the state championship his senior year of ’61. He’d received some interest from MLB scouts, who at that time were most interested in him for the mound. But he didn’t want to pitch and hoops was his first love so he opted for a scholarship in that sport to nearby Morehead State. There he played both sports all four years from ’62 to ’65 and eventually his baseball eclipsed his basketball and he was all-Ohio Valley Conference each season in the former sport. But he was not taken in the draft that spring and stuck around school to finish his degree in education and history, and also to help run a Little League clinic. While doing the clinic he got spotted by a local Phillies scout and after a tryout he was signed late that summer. It was too late to play ball that year so he began his career in ’66 in A ball where he put together an all-star season. He remained at that level in ’67, moved to Double A in ’68, and to Triple A in ’69. At two of those stops Frank Lucchesi was his manager and at all four Larry Bowa was his DP partner at shortstop. In ’70 after another good spring training he made the Phillies.

The Phillies in the early Seventies were having a pretty nasty time during a transition that took a few years. By ’70 Dick Allen was gone and outside of Deron Johnson at first the only regular infielder with any big league experience to open the season was Don Money, and he was a rookie in ’69 at shortstop. Both Doyle and Bowa arrived that spring, pushing Money to third, and while offensively the trio was a bit challenged – though Money did hit .295 – they proved themselves pretty slick in the field. From the start Denny, who threw righty but batted lefty, was platooned, initially with Tony Taylor, and then mostly with Terry Harmon, and while his offense was nothing special, he increased his average pretty significantly every season, peaking his final year in ’73. For California in ’74 he was the regular guy at second, mostly hitting against lefties as well, as he put up a .260 average in 147 games, more than he’d done any year in Philadelphia.

1975 didn’t start off to well for Doyle. The hottest rookie in camp was Jerry Remy, another good defender who brought significantly more offense with his game and was nine years younger than Denny. Through mid-June Denny only got into eight games as Remy’s back-up. In the meantime the Red Sox were looking for a second baseman to back-up their regular guy, Doug Griffin. Griffin had been doing a nice job but he tended to be injury-prone and the Sox, in the midst of a division race, wanted to be sure they were set for the run. So at the trading deadline they picked up Denny for a minor leaguer and Doyle couldn’t have been happier to return to the east coast. He hooked up with the Sox the day of the trade and was in the line-up that night. He got into the lion’s share of games the rest of the season and had his best offensive string at any level, hitting .310 for the Sox with 21 doubles and 50 runs in about half a season. In July he put together a 22-game hitting streak, the longest that year in the AL. He was a big reason Boston won the division and he had a nice post-season, getting two RBI’s against Oakland in the playoff sweep and hitting safely in all seven games in the Series. He returned to be the regular second baseman in both ’76 and ’77 though his offense didn’t approach his ’75 numbers, as he hit .250 the first year and .240 the second. In ’78 the Sox picked up a new guy to play second – Jerry Remy – and Denny was released in spring training, ending his playing career at 33. He finished with a .250 average in his eight seasons. In his ten post-season games he hit .268 with a couple walks and those two RBI’s.

Doyle wasn’t too sure what to do after he played. He contemplated teaching but right off the bat that first summer he ran the baseball school in Florida he and his two twin brothers – Blake and Brian – had founded a couple years back. His regular summer gig, he hadn’t been anticipating it would be a full-time one until during the Series that year his school got an unexpected plug. Brian had replaced the injured Willie Randolph for the Yankees at second and had a bang-up post-season and color guy Joe Garagiola mentioned the Doyles’ baseball school during a telecast. That sent all sorts of kids running to Florida and since then there has been no turning back as the school became a year-round academy and opened satellites in other locations. Denny continues as president and resides full-time in Florida. 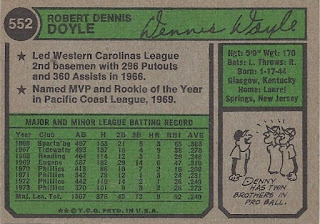 Denny gets the minor league props in his star bullets. As for his brothers, Brian peaked by far during that ’78 post-season – he hit .391 with three RBI’s in nine games – and hit .161 in four short seasons up top. He’d played a bunch of years for Texas in the minors and also played for Oakland and Cleveland. Blake pretty much spent his whole career in the Baltimore chain, peaking in ’78 when he hit .280 in Triple A. Denny has a very informative SABR bio from which a bunch of color for this post came.

Joshua and Doyle sounds like a multi-ethnic funeral home. I think they preferred lighter stuff: