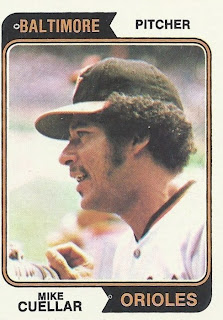 Here Mike Cuellar kicks off what would be the dominant theme in his baseball cards for the remainder of his career. From ’74 through ’77, Mike’s photo would be an action profile shot with the exception of ’76 when he would have an action shot on the mound. I like him with an afro since that hair style seemed to more embrace his character than the close-cropped look he’d had on his cards prior to this set. He had another excellent season in’73, as he did every year in Baltimore from ’69 to ’74, a period during which he averaged better than 20 wins. Pretty good for a pitcher a lot of people speculated was on the downswing when he came over from Houston after the ’68 season. But Baltimore specialized in those trades (Frank Robinson) and with all those wins Mike brought a bunch of color, some of it through his superstitions. He would always sit in the same spot in the dugout. He always had to have the same hat when he pitched. He never stepped on a baseline. He was a generally happy guy who was a locker room favorite. Mike’s whole life was baseball which worked for him while he was playing but unfortunately didn’t after he was done.

Miguel Cuellar was born in Santa Clara, Cuba, and by the time he finished high school was pitching for that country’s Army team. Those were pre-revolution days and that team was the showcase for Batista, and was one of the only ways for anyone from a poor family, like Cuellar’s, to get any recognition. In ’57 a Cincinnati scout spotted Miguel in a game and signed him. He remained in Cuba, pitching for the Havana Sugar Kings, a Triple A team, through ’60 and put up a combined record of 37-39 with a 2.86 ERA during that time. His short stint in Cincinnati during ’59 wasn’t too impressive though. In ’60 the embargo resulting from the ’58 revolution took hold and the Sugar Kings relocated to Jersey City where Miguel finished out the year. In ’61 he had a poor season – 4-11 with a 4.58 ERA – and at 24 he was either released or sold by the Reds. He spent ’62 pitching in Mexico for Monterrey where he got some of his mojo back, going 11-6 with a 3.60 ERA. In ’63 he then briefly hooked up with Detroit’s Double A team – 1-1 with a 2.54 ERA in 39 innings – before he was signed by Bobby Maduro, a Cuban exile who ran baseball teams and was a fan of Miguel’s from his Havana days. He owned the Jacksonville Suns, then a Cleveland Triple A affiliate. After going 6-7 with a 3.79 ERA to finish the season, Miguel had a super start at that level in ’64, going 6-1 with a 1.78 ERA in ten starts. By then Jacksonville had moved to the St. Louis system, and mid-season Miguel was called up to the Cards, just in time for a pennant race. His ERA was a tad fat, but he got seven starts and four saves among his 32 games though he got shut out of post-season work. He kicked off ’65 back in Jacksonville where he again had excellent numbers, going 9-1 with a 2.51 ERA. But Mike threw junk, his out pitches being a tough screwball and a palmball, and St. Louis thrived on heat. So that June he went to Houston with Ron Taylor for Chuck Taylor and Hal Woodeshick in a trade of four pitchers.

For the Astros Cuellar got immediately moved to Houston and the rest of the way he was a spot guy, getting four starts and a couple saves. His record was nothing special but he pulled his ERA down by a run. That was a good prelude to his ’66 season when he moved into the rotation, got real stingy with his home runs given up, and finished second to Sandy Koufax for the NL ERA title. Then in ’67 he made his first All-Star team with enough wins to set a Houston record and another excellent ERA. But ’68 was a bit of a bummer after a shoulder injury had him miss about a month total and his record moved back to the losing side. He still put up another great ERA but Houston was worried about an ailing shoulder on a 31-year old arm. That December they sent Miguel/ now Mike to Baltimore for former Rookie of the Year Curt Blefary. Oops.

With the Orioles Cuellar pretty much hit the ground running. His screwball especially was much more at home in the AL and particularly with the help of George Bamberger, Mike began a long run of excellent pitching. His first year he got five shutouts and split the Cy with Denny McLain. In ’70 he led the AL with his 24 wins, 40 starts, and 21 complete games. He also won the final game of the Series that year. In ’71 he was one of four O’s pitchers to win at least 20 games. Both those last two years he was again an All-Star. In ’72 he missed a couple starts due to the early-season player strike but still won 18 and put up his second-best ERA in Baltimore. In ’73 he got a little more generous in giving up hits and his ERA rose a bit but he still put up an excellent record. Then in ’74 he cut the homers in half and went 22-10 to lead the AL in percentage and get to his last All-Star game. In ’75 he actually got stingier with the hits but his ERA popped by half a run anyway and he went 14-12. Then in ’76 came serious shoulder pain, a 4-13 record, and a 4.96 ERA, all which got him released at the end of the season (no loyalty in that town!). In ’77 he signed with California but his arm was toast, later confirmed by an abbreviated comeback attempt in Mexico. Mike finished with a record of 185-130 with a 3.14 ERA, 172 complete games, 33 shutouts, and eleven saves. In the post-season he went 4-4 with a 2.85 ERA in twelve games and he went 74-66 with an ERA under 3.00 in the minors.

Inexplicably Cuellar was unable to find work in baseball after he finished playing. He never made a ton of money and he ended up taking his five handicap down to Florida where for years he basically made minimum wage doing various work on local golf courses and driving ranges. He did some voluntary spring training coaching for Baltimore but was never able to get a regular gig out of that. By the mid-2000’s he was pretty much retired and living off a monthly pension of about $3,100 with zero health insurance. Early in 2010 he suffered a brain anuerysm and later that year had his gall bladder removed. He then contracted stomach cancer from which he passed away later that year. He was 72. 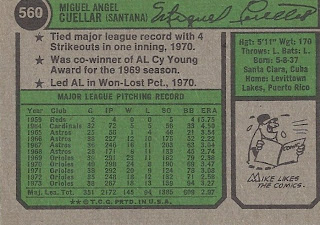 Miguel has some awfully good star bullets and revives the parenthetical name. He is one of the few guys to have a lifetime ERA under 3.00 on his card in this set.

Here we hook up two former Reds who never played together and only met in the post-season: