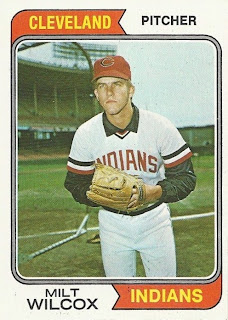 OK, so I did this rather lengthy write-up and then it got erased. Ooh, that blows. And July is going to be a pretty dry month anyway between holidays and vacation and tons of work so I was sort of doubly pissed. Venting over. Here is Milt Wilcox, posing at home in Cleveland in a shot that looks suspiciously like a wider angle one of his ’73 card so it was probably taken in ’72. I always thought Milt was a bit of a cat with his multiple lives and when he was delivering those steady seasons for Detroit in the early Eighties I was pretty surprised it was the same guy who pitched for the Reds. Animal references are pretty appropriate for Milt since one of his first off-season pastimes was raising chinchillas and then he got into things in a big way with a whole other animal after he was done. ’73 was pretty tough for Milt. Though he began the season 3-0 and finished with a pretty good record given the team for which he pitched, his ERA was always fat and he was constantly fighting ailments. First he had strep and then a bad elbow, which forced him to miss about three weeks. Then in July he screwed up his ankle and missed nearly a month. He eventually got so eager for an edge to override his problems that he took some spitter lessons from master Gaylord Perry but that didn’t help either. It would be his final season as a starter for a long time and it must have felt like his Series appearance with Cincinnati was crazy far back. But Milt would return to the post-season years later in a big way.

Milt Wilcox was born in Hawaii – I am pretty sure he’s the only AL guy from that state in the set – and relocated as a young kid to Oklahoma where his dad got work in the oil fields. The word was that Milt was a fourth-generation Hawaiian since his great-grandfather was a Danish sailor who jumped ship on the islands, married a native, and settled down. In Oklahoma Milt would play ball and in high school he was a pitcher/outfielder whose .399 average and 10-1 record got him drafted and signed in the second round of ’68 by the Reds. That summer he put up excellent numbers in both Rookie and A ball (that he lost five games with that ERA doesn’t speak much for those teams’ offense). In ’69 his ERA shot up in a season at the higher level truncated because of injury and the beginning of his military hitch. But after some nice work in the Instructional League and winter ball he got pulled up to Triple A where his effective bounce included five shutouts, one a no-hitter. That September he made his debut in Cincinnati when he was called up to replace fellow rookie Wayne Simpson, who’d been injured. In his second game and first start he threw a shutout and in his short time he made enough of an impression to be included on the post-season roster. Good thing too, because he won the pennant clincher against Pittsburgh with three innings of one-hit ball during which he struck out four consecutive batters in the heart of the Pirates order. His follow-up year wasn’t so good, though. Making the roster despite a tough spring training, Milt experienced shoulder issues early on and pitched sparingly through early June when he was returned to Triple A. There he improved things quickly – three more shutouts – before returning to Cincy in late August, working enough to pull his ERA down about a run. After the season he was sent to Cleveland for outfielder Ted Uhlaender.

In shades of his rookie season, Wilcox threw a shutout in his first start for the Tribe. And he would throw very good ball despite missing time for his reserve hitch and sporadic shoulder pain. By early June he had an ERA under 2.00 but poor run support had his record at 6-4. Then things got worse as he went on a losing streak of seven straight though he maintained a pretty good ERA. He missed more time to his shoulder and elbow being hurt and finished with a nasty record even though his ERA was at league average. After his challenging ’73 he spent ’74 pitching out of the bullpen where his ERA improved, but not by much. After finishing that year 2-2 with a 4.67 ERA and four saves in 41 games, he was sent to the Cubs for Brock Davis and Dave LaRoche. By then Milt’s main problem was tendinitis in his pitching elbow and ’75 would be pretty much a lost year, split between Triple A – 4-3 with a 4.31 ERA in eight starts – and Chicago, where he was 0-1 with a 5.63 ERA in 25 relief games. The best development that year was that he picked up a new pitch, a split-finger, from roving minor league pitching coach Fred Martin. Until then Milt had been a power guy with a fastball, hard slider, and an occasional curve. The forkball and a palmball he picked up later put a bunch less stress on his arm and would do wonders for him down the line. The beginning of that was in ’76 when after a few games back in Triple A Milt was loaned to the Detroit organization for whom he had a pretty good year back in the rotation, going 6-7 with a 3.81 ERA. The Tigers decided to keep him in a sale and in ’77 Milt went 9-4 with a 2.44 ERA in his 14 starts. As luck would have it the Detroit pitching staff was hobbled by injuries, mainly to Mark Fidrych and Vern Ruhle, and Milt was called up that June.

Wilcox was pulled up to replace Vern Ruhle and so was a spot starter and swing guy the rest of the way. His first game up he threw nearly seven innings in relief, giving up two runs and striking out nine. By the end of August he was a surprising 6-0 and he finished the year 6-2 with a 3.64 ERA and almost no pain in his 20 games. He then joined the rotation and the next six seasons he went a combined 73-62 with a 3.89 ERA, finishing 62 of his starts. His best season during that time was probably the strike year of ’81 when he was 12-9 with a 3.03 ERA. Milt was able to revive his fastball by ’78 and actually rehabilitated his elbow through bowling. But continued wear both on the shoulder and elbow required a pretty steady diet of cortisone shots, no season moreso that ’84, which would turn out to be his best year. Milt took a grin-and-bear-it attitude in going 17-8 to be the division-winner’s third big gun behind Jack Morris and Dan Petry. Milt was especially hot down the stretch, going 9-2 after the All-Star break. On his return to the post-season after 14 years he again got the pennant win against KC, hurling a shutout eight innings. He also had an excellent start and win against San Diego in the Series and ironically finished his biggest year with no complete games. He also pretty much finished his arm as the wear and cortisone took their toll. After going 1-3 in only eight starts in ’85, Milt finished a nasty 0-8 with Seattle in ’86 and was done. He went 119-113 with a 4.07 ERA, 73 complete games, ten shutouts and six saves. In the minors he was 53-39 with a 2.88 ERA and in the post-season he went 3-1 with a 1.42 ERA in five games and a strikeout an inning.

In ’81 while in the midst of his Detroit years Wilcox opened a baseball school, which he continued doing for a bunch of years. He took some time out to play in the Senior League both of its seasons – he went 12-3 in the initial one. By the late Nineties he began attending competitive dog skill shows and by 2005 he founded his own company, Airdogs, which basically is a traveling show of competitive dog jumping that he has franchised out to a bunch of locations. It has its own website – linked to here – and Milt seems like a big happy personality in his involvement, judging by this interview. 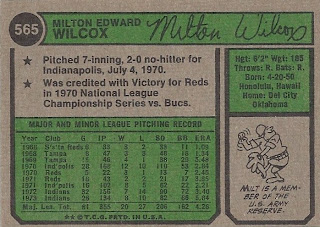 The star bullets and cartoon were covered above. I believe his military commitment was finished in ’75. In “The Curse of...” Milt gets a mention as an aside. In a game against Texas Milt was racing to cover first on a grounder to John Ellis by Lenny Randle. Randle basically steamrolled Milt and Ellis objected by popping Randle in the face three times, knocking Lenny out. Ouch! A great star bullet for Milt down the road was the perfect game he carried until the 27th batter in a game against Chicago in ’83. That batter, Jerry Hairston, lined a clean single off Milt with two out in the top of the ninth.

Greg Luzinski hit – or didn’t – against Milt in the near-perfect game but that doesn’t help here: